No, we aren’t having another one! This is the blog post I promised so many of you back when I did the tour of Reverie’s room. Decorating a baby girl’s nursery was actually a lot of fun…which I really never expected!

We found out quite early (11 weeks) that we were having a little girl–maybe that’s the benefit of having a baby at 40? To make things fun, I dropped off “the envelope” at The Latest Crave in Geneva, as an exciting twist on revealing the gender. 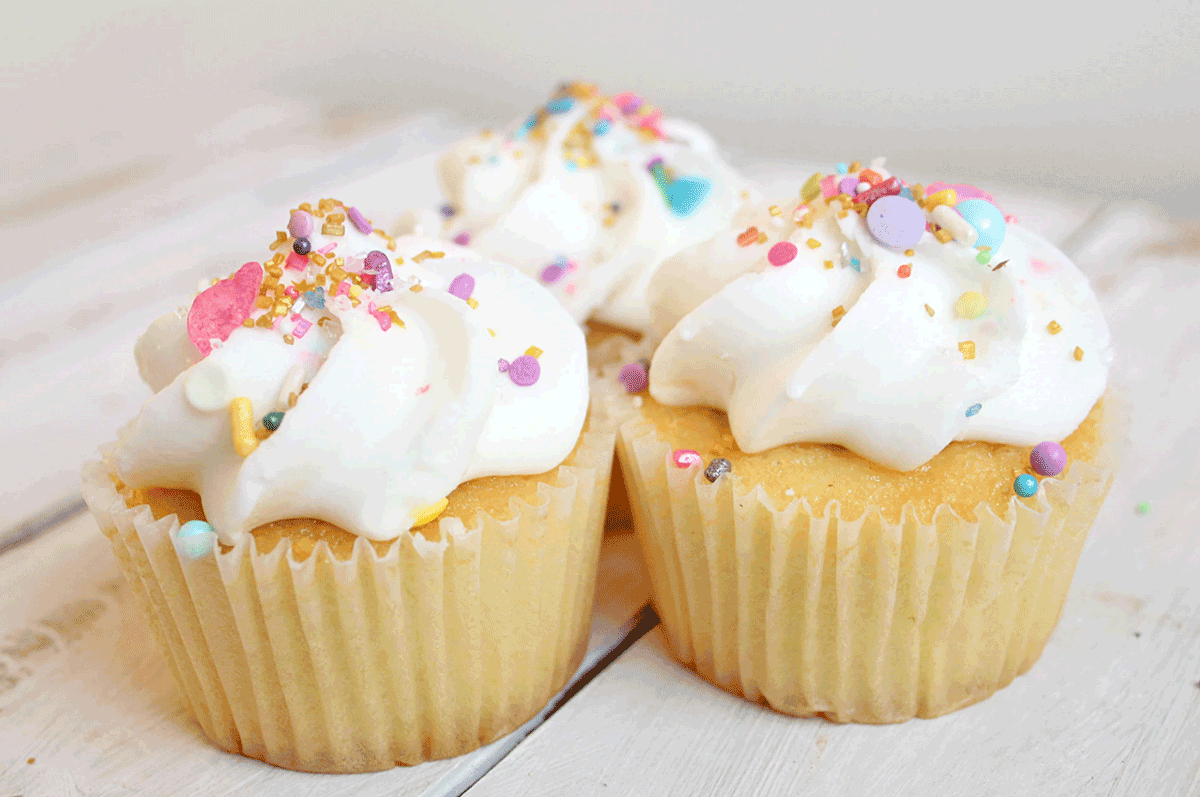 The cupcakes came out after dinner that night–two of our friends waited anxiously, and the other two didn’t even know we were expecting. The first bite, I pulled the cupcake back to see the color, and I heard Scott say, “Is that pink?!?” in dramatic fashion.

Lots of things went through my head, being pregnant with a girl, that I never thought about with the boys. Boys are simple. They like dirt and trains.

Lots of questions ran through my mind. Will she struggle with self-esteem? How do we talk to her so she doesn’t just focus on appearance? Will she be spoiled as the only girl–and the baby? Much of this was probably pregnancy hormones talking, but it seemed surreal to be expecting a girl. And, how do I go about decorating a baby girl’s nursery?

Turns out, you do it the way you decorate anything. For me, that starts with the palette. I have to have colors that coordinate. When I don’t do that, it’s just chaos. I started with aqua. She was being born into a family of boys–plus, aqua, teal and turquoise are my favorites. So, she would just have to deal.

That’s when I discovered how lovely blush pink is with aqua. I was inspired by photos with pink and green pairings. So…maybe pink wasn’t so bad?

It was time for some major scrolling–and a bit of shopping! Being that this was our only girl, our last, and I was giving birth at 40, I had high demands. Poor hubs. He was a good sport. The room was painted…twice. The chandelier was put together, wired and hung. Of course, she certainly needed a custom closet…

I’m big on style and function being in balance, so things can’t just be “pretty,” they also have to serve a purpose. Wooden bins and baskets the are ideal storage.

I love how gallery walls tell a story. Simple, but coordinated, curated with pieces that all play a role of expressing the message. Shopping your home is a great way to pull one of these together. And, the boys worked with me to create that little burlap piece, which meant so much. 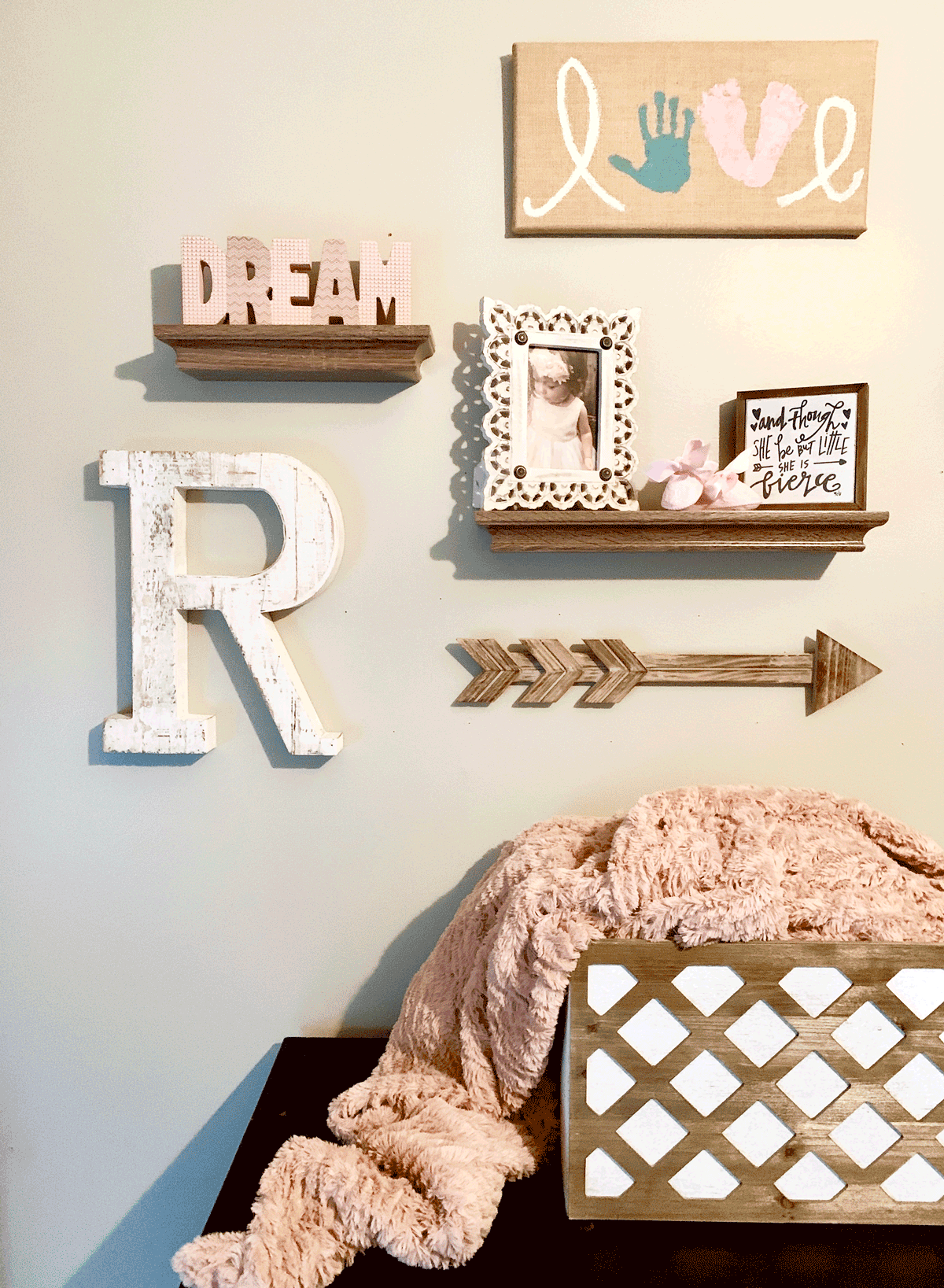 Reverie measured quite small much of the pregnancy, and it was a “two vessel cord” pregnancy, so we were on high alert for her development the entire time. The sign, “And though she be but little, she is fierce,” seemed like it was made for her. The “Dream” added here was picked out by Scott–of course, it’s the meaning behind her name. 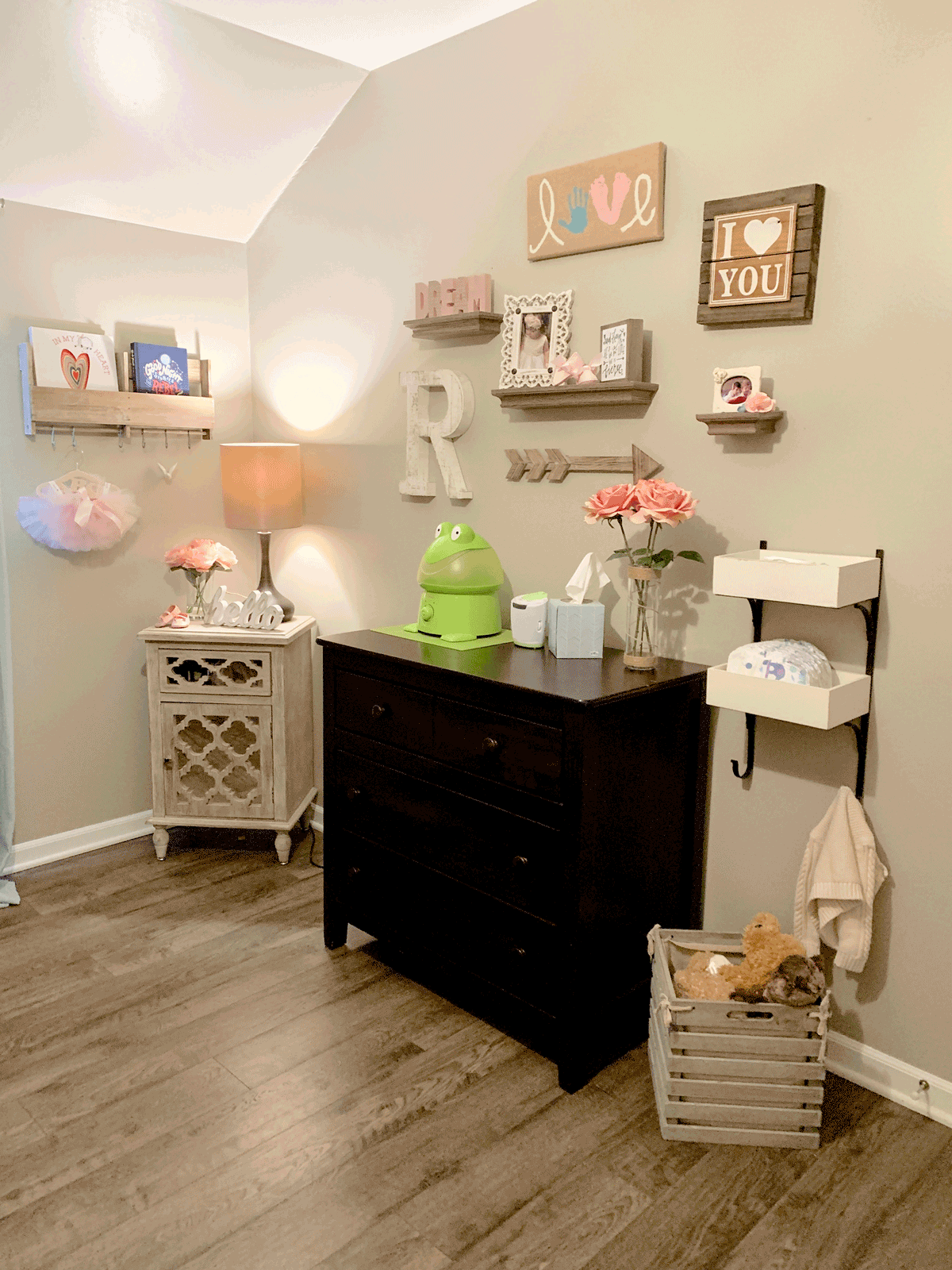 Here we go with style and function. The dresser was the changing table, just like with the boys, for the first 5-6 months, when they no longer sit still for changes. The wooden shelf baskets were perfect for diapers and wipes. The basket for stuffed animals? You need one. I don’t know what goes on, but those things multiply like guppies.

Something Old, Something New…

I fell in love with pictures like this on Pinterest. The little dress hanging, precious memorabilia. I shopped our home for many of these items, which made it all the more meaningful. 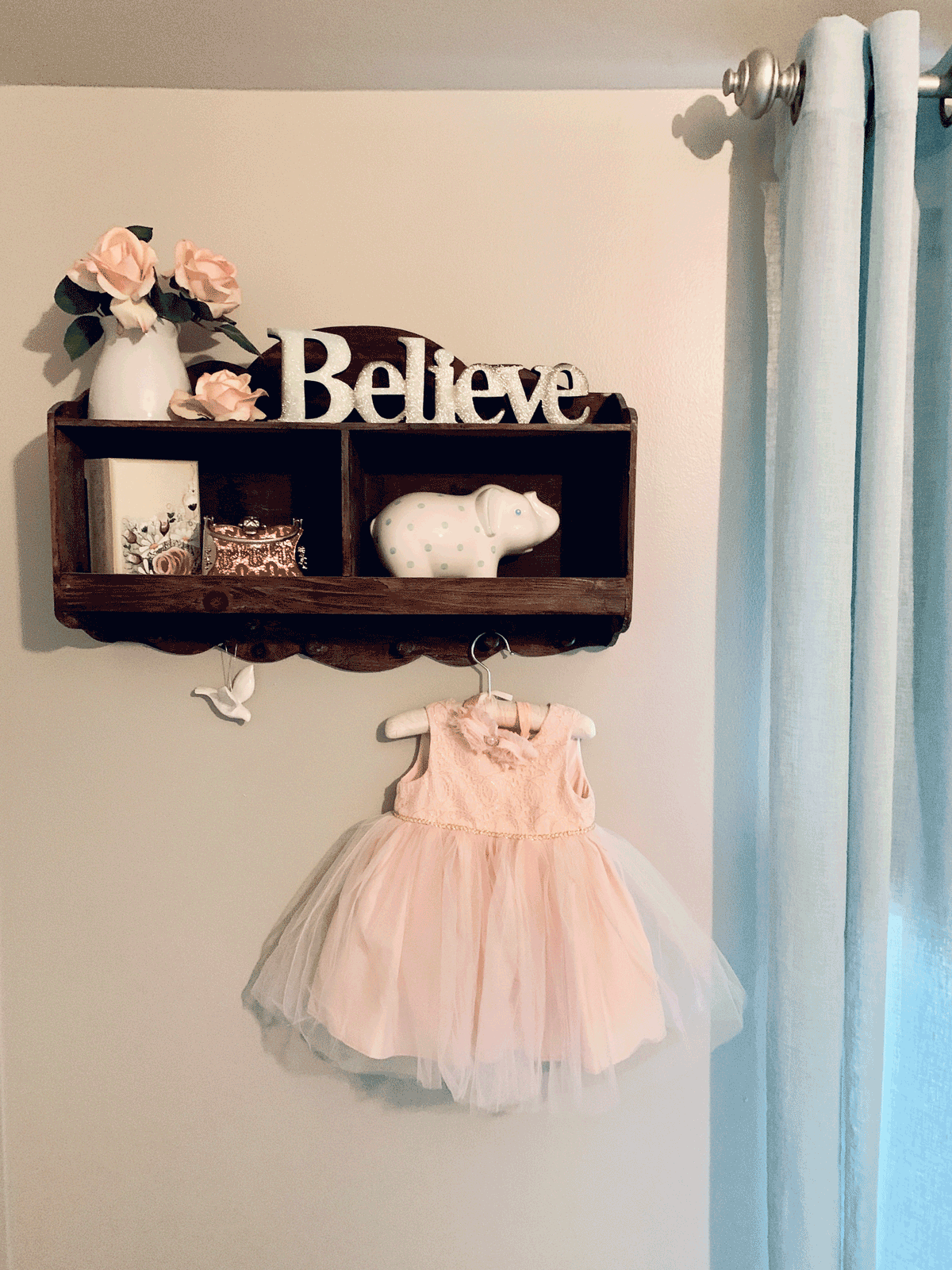 The “Believe” sign was a gift from a good friend, over a decade ago. The jewelry box was hand-painted by my sister-in-law in the year 2000 when I was in their wedding. The Tiffany bank was a gift for my first when he was born–he didn’t mind donating, but he wanted the money out, of course. The dove is one of three–each in our children’s rooms, in honor of my father-in-law. We did a dove release at our wedding–a tradition he started.

Talk about controversy. I poured over tons of inspiration for decorating a baby girl’s nursery, looking for the perfect crib skirt. I was fighting the urge to impulse buy, when I really didn’t want to spend too much, especially when our middle child never spent more than a handful of nights in his crib–oh, the joys of parenting. Unaware, Scott had called his aunt, and she was so excited to create something for us. When I found out, I was incredibly touched that she wanted to do this for us.

But, I was irritated with him. He hadn’t consulted me–or even asked for the color. You avid decorators–you’ll get me. I spent hours upon hours developing this room. When we got a snapshot of the fabric, it was orange. ORANGE. But, when it finally arrived, it was stunning. A blush pink/peach with vintage lace…just perfect. I couldn’t have asked for anything better.

Reverie Grace…she wasn’t technically named until she was about 12 hours old. I loved the name, but knowing that Broderick was supposed to be Oliver up until the moment I held him, I had my reservations. Except…I needed to decorate. 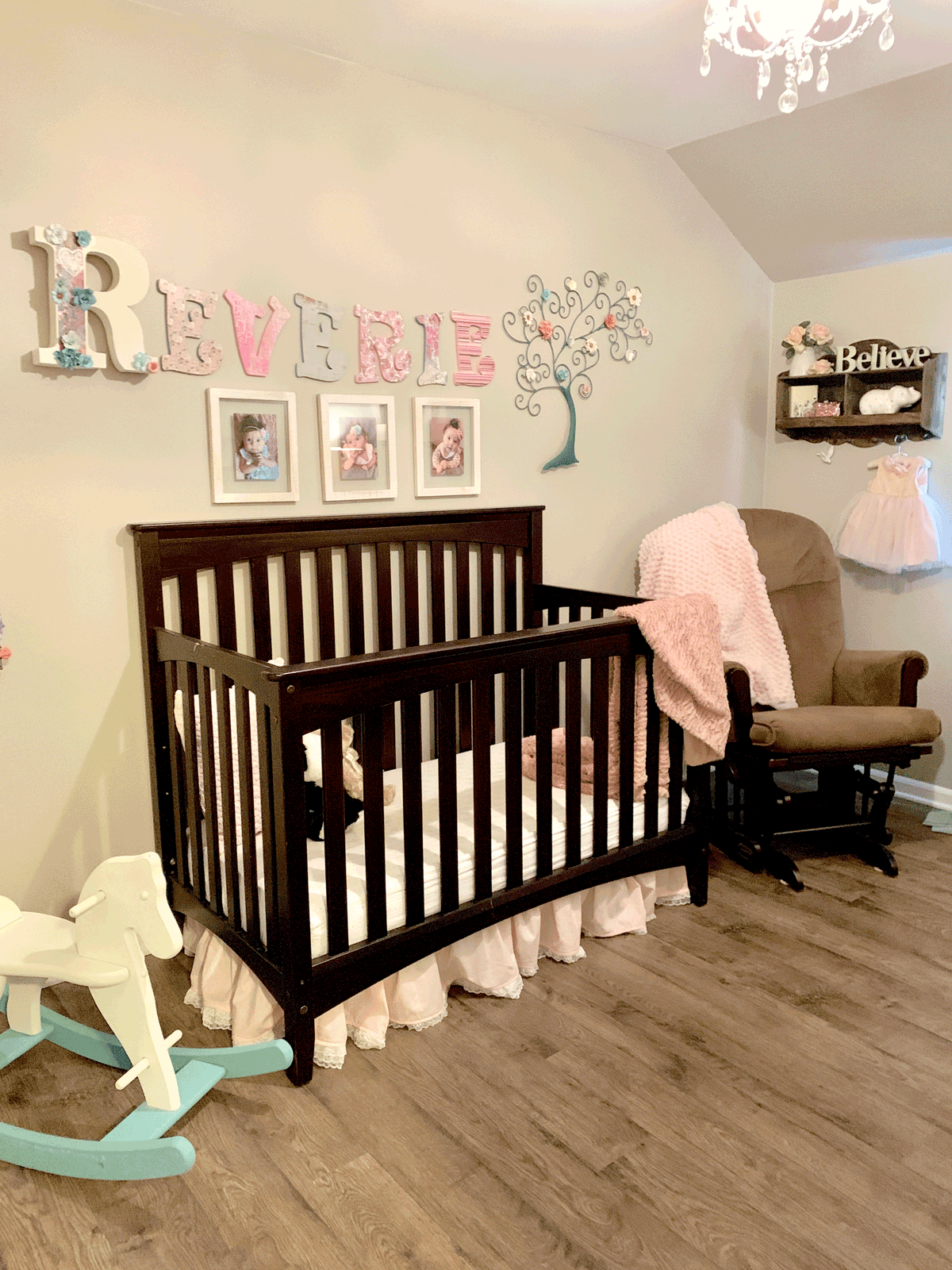 So, we went with it, knowing it might change. Reverie is “dream like” in a number of languages. It’s a word I’ve always been fond of. These are wooden letters that I used modge podge and scrapbook paper to create. The “R” is a metal letter that I found at Michael’s on clearance–it was mustard yellow. I chalk painted it and added a strip of scrapbook paper and flowers. The rocking horse was an FAO Schwartz yard sale find that I chalk painted. 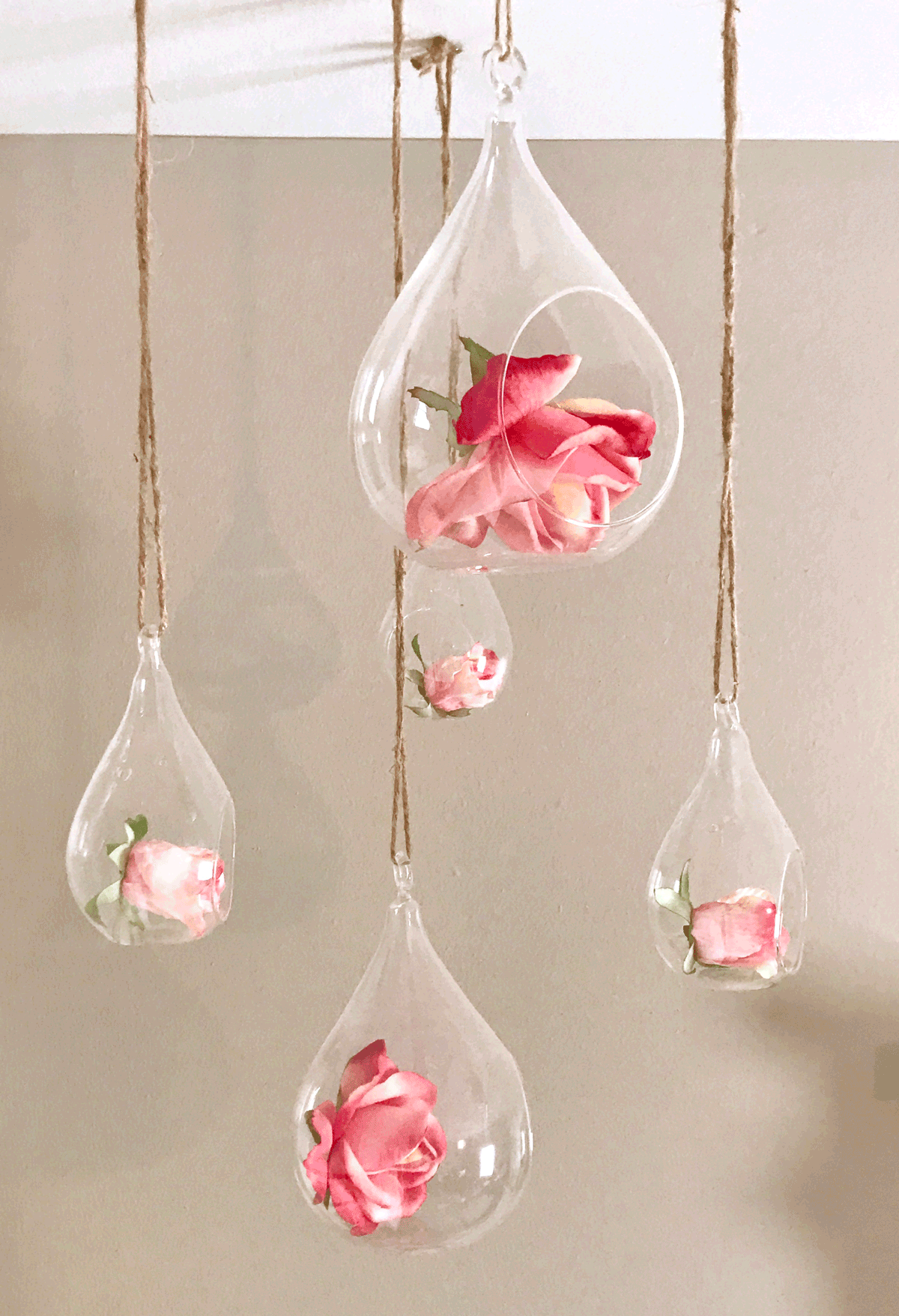 The hanging roses were all Scott. We hadn’t decided on a mobile, and he surprised me with this concept for my birthday. I love the subtle styling and color it adds.

I’ve gotta go there…it’s my job! It’s also incredibly important to control the light and safety of your child’s room. Remember that style + function? There’s no better example than the windows and window treatments! I love Solera roman shades from Hunter Douglas. They’re the same ones I put throughout our home–including the motorized one for the bathroom renovation. 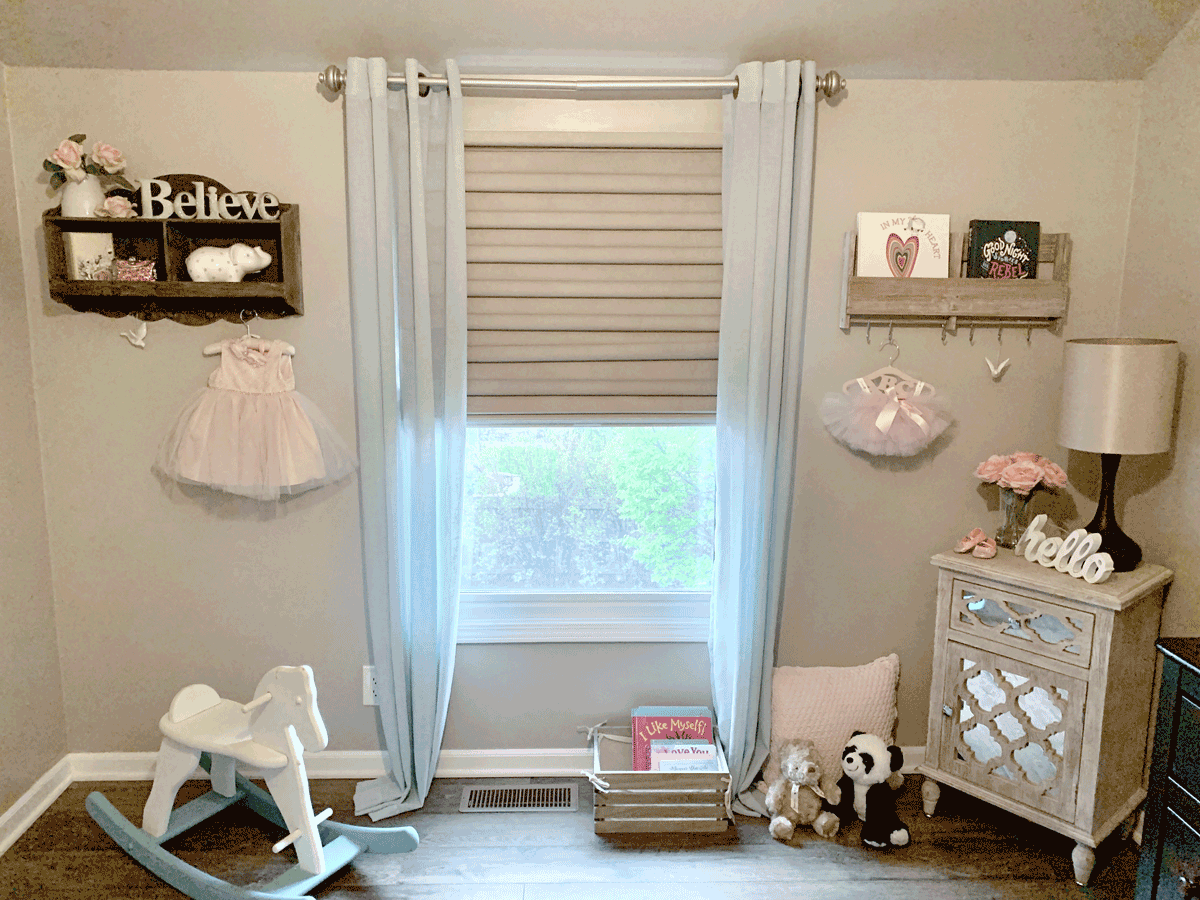 Cordless, and super easy to operate, these shades are great for keeping little ones safe–as well as staying safe from the rough treatment of little ones. The kids can smoosh, wrinkle and crush these shades, and they just pop back beautifully! I wanted the linen look of these aqua curtains to frame the window, and I love the result. It’s basically pitch black when it’s time for Reverie to nap during the day.

What Did I Forget?

Is there anything I missed? Do you want the details on any of these items? Have you done a similar project for your little bundle? Let me know in the comments!

The Pantone Palette 2020 Transforming the Playroom