My favorite season of the year is any time it’s acceptable to make soup. My second favorite? When it’s not. Yes–I’m the person who makes soup when it’s 95º outside, causing my husband to come home and say, “Whyyyy are you making soup?!?”

Adobo Seasoning for Chicken (or additional spice mix below)

(Scroll to bottom for Nutrition Information)

This recipe is a combination of a few recipes I’ve used, resulting in one of the best tasting soups I’ve ever had. It’s generally considered a keto white chicken chili, but I’ve made this soup for many people, and it never disappoints! My husband (a self-proclaimed “foodie” and known by many as a “food snob”) has actually said that it’s the best soup he has ever had. So, there’s that. Especially, because I used to tell people I couldn’t cook. If I can do it, you can do it!

If you’re someone who likes to see the cooking “process” I’m including pictures for you! This gave me more confidence when I started cooking. 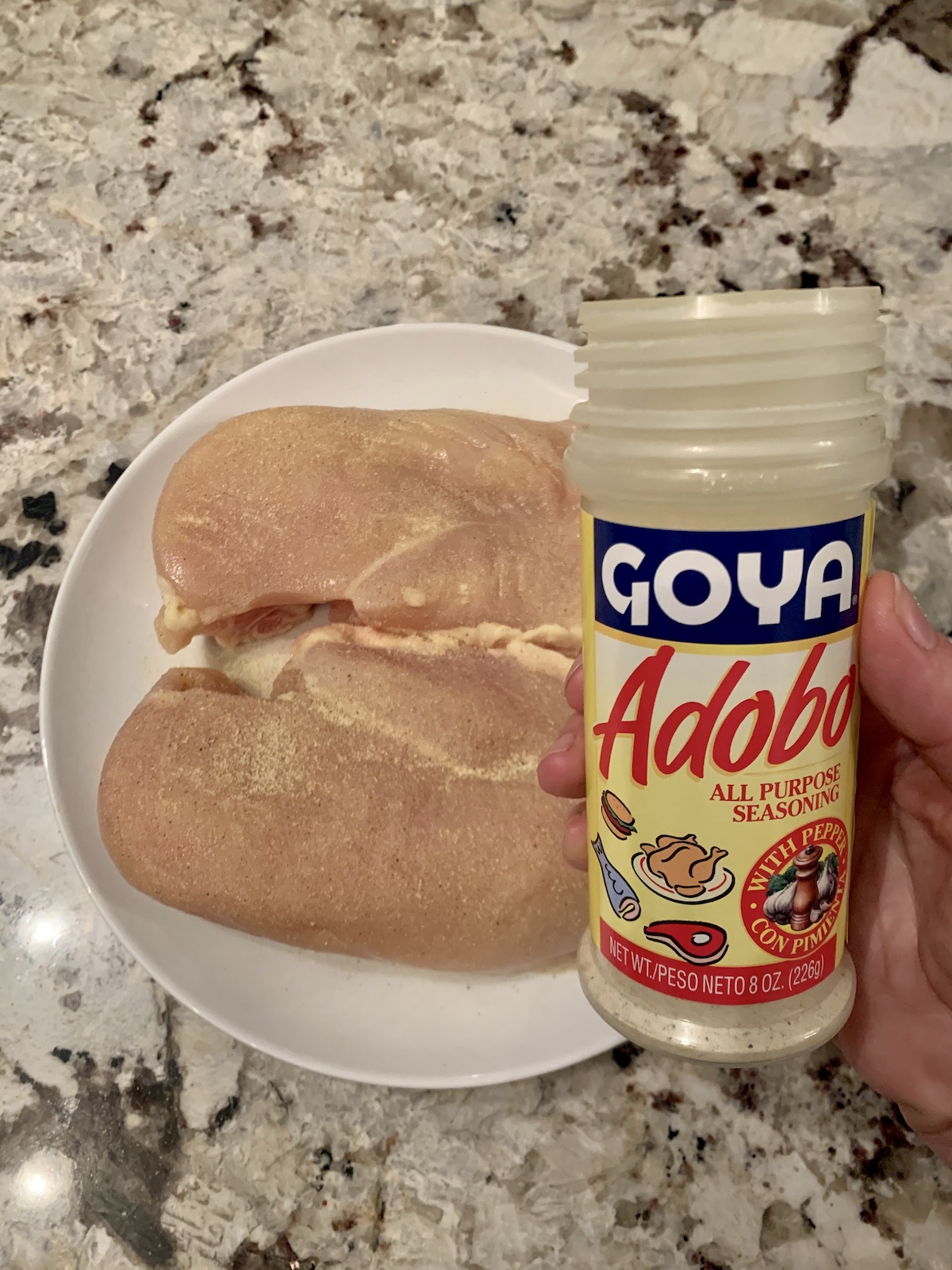 The chicken should be seared on both sides before removing to shred. 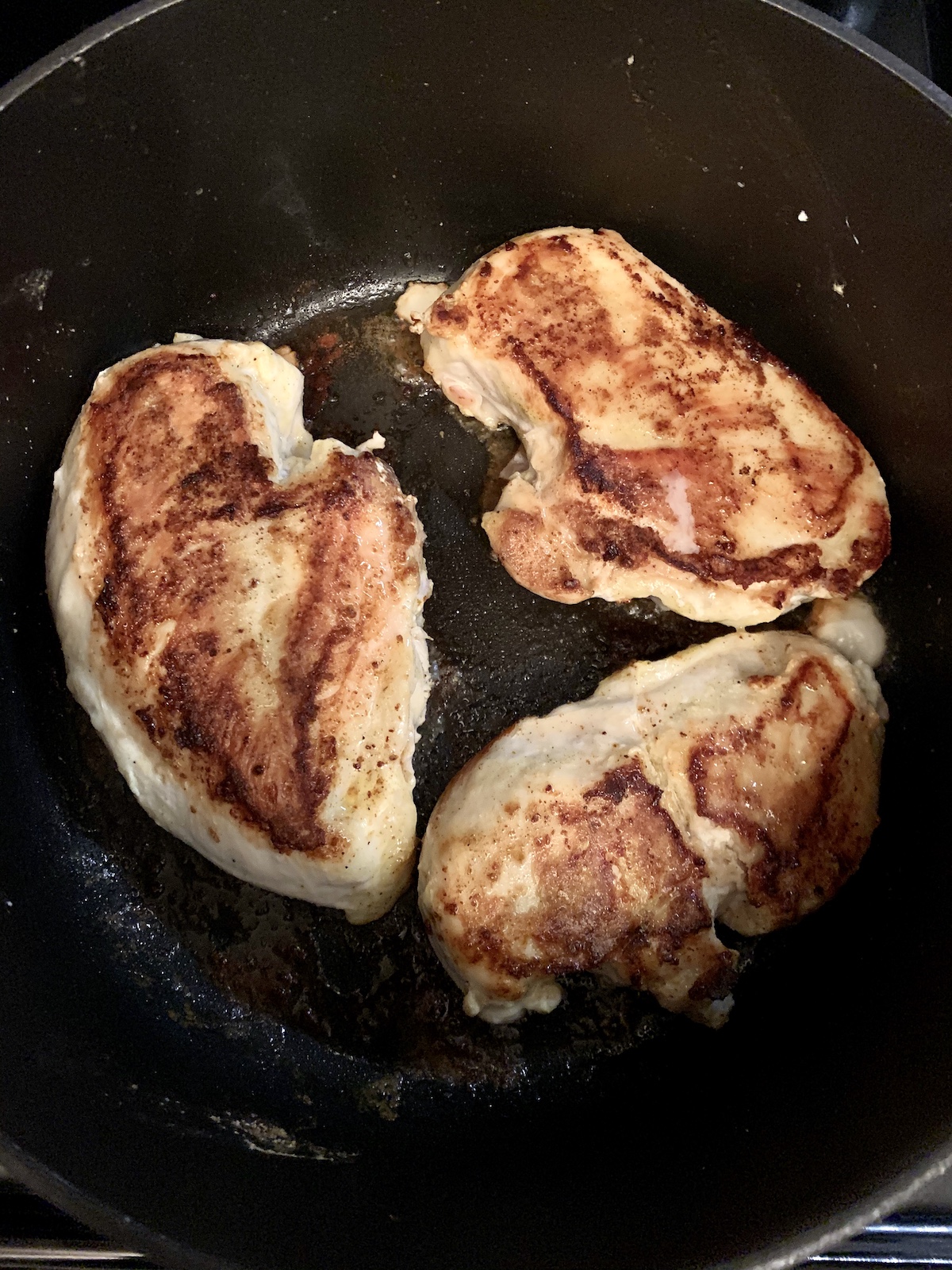 Shred the chicken with forks. If you’re cooking a third, like I did here–for extras–you may want to chop it up and throw it in a little pan to cook it through. The shredded chicken will be simmering in the pot of soup, so if it’s not cooked all the way through yet, it will be. 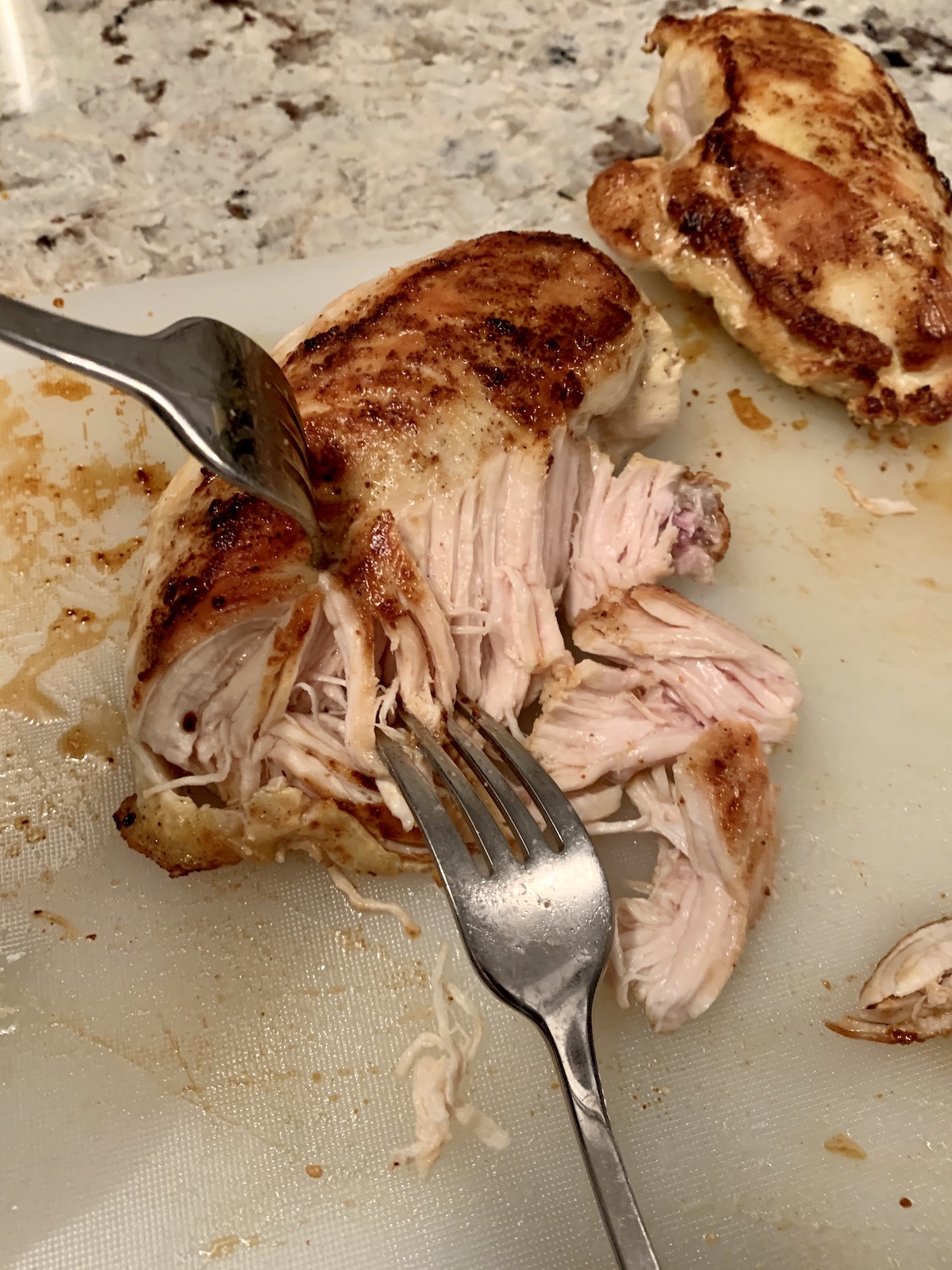 While the chicken cooks, prep the veggies and spices. 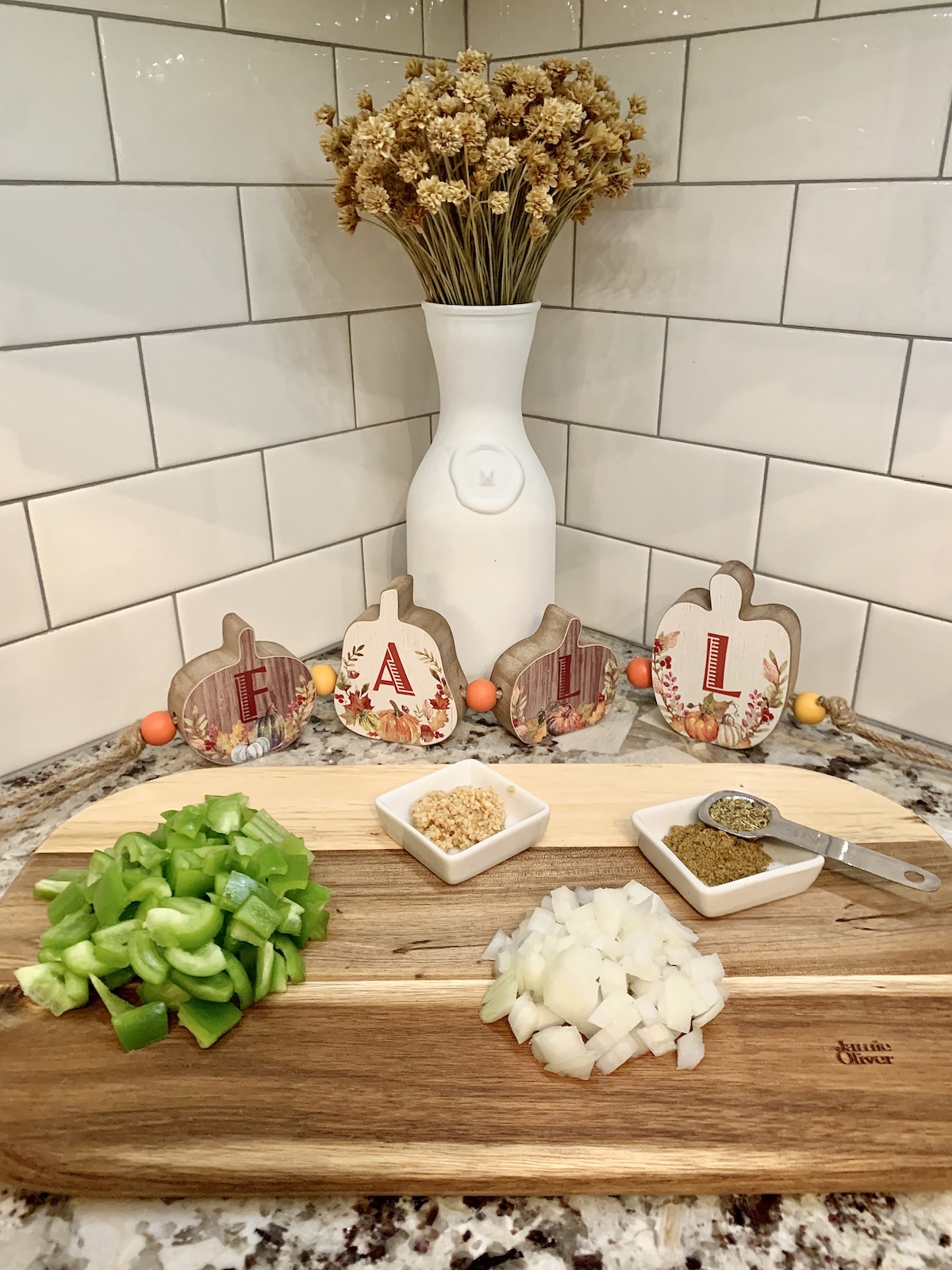 Make sure to cook the green pepper and onion with the cumin and oregano about 5 minutes. Then add the minced garlic. Adding it sooner will cause it to burn. After about 30 seconds of the garlic cooking, you can add the can of green chilis. Cook for approximately one minute. 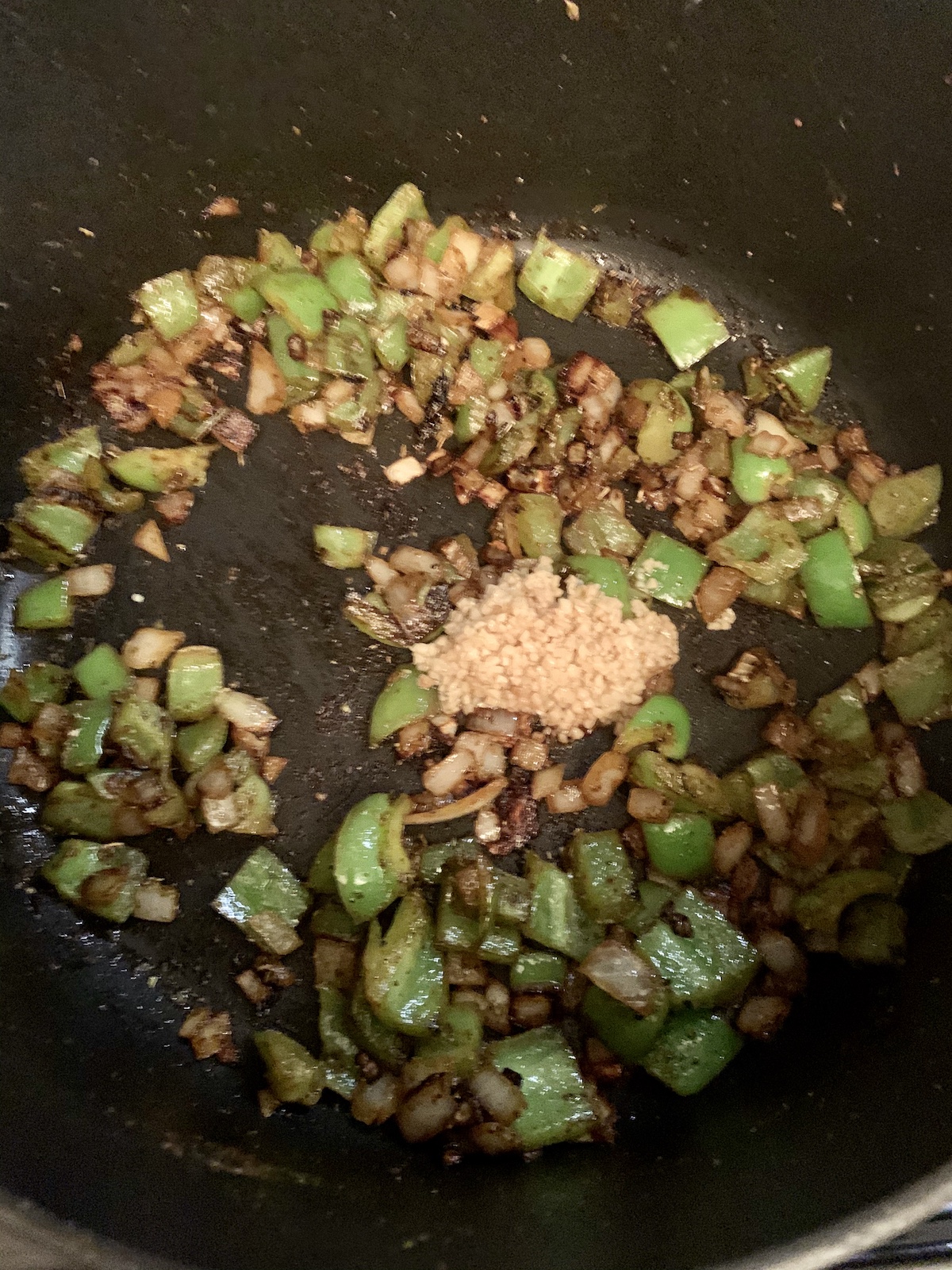 The chicken broth can be added next. See my tips below for what I use. 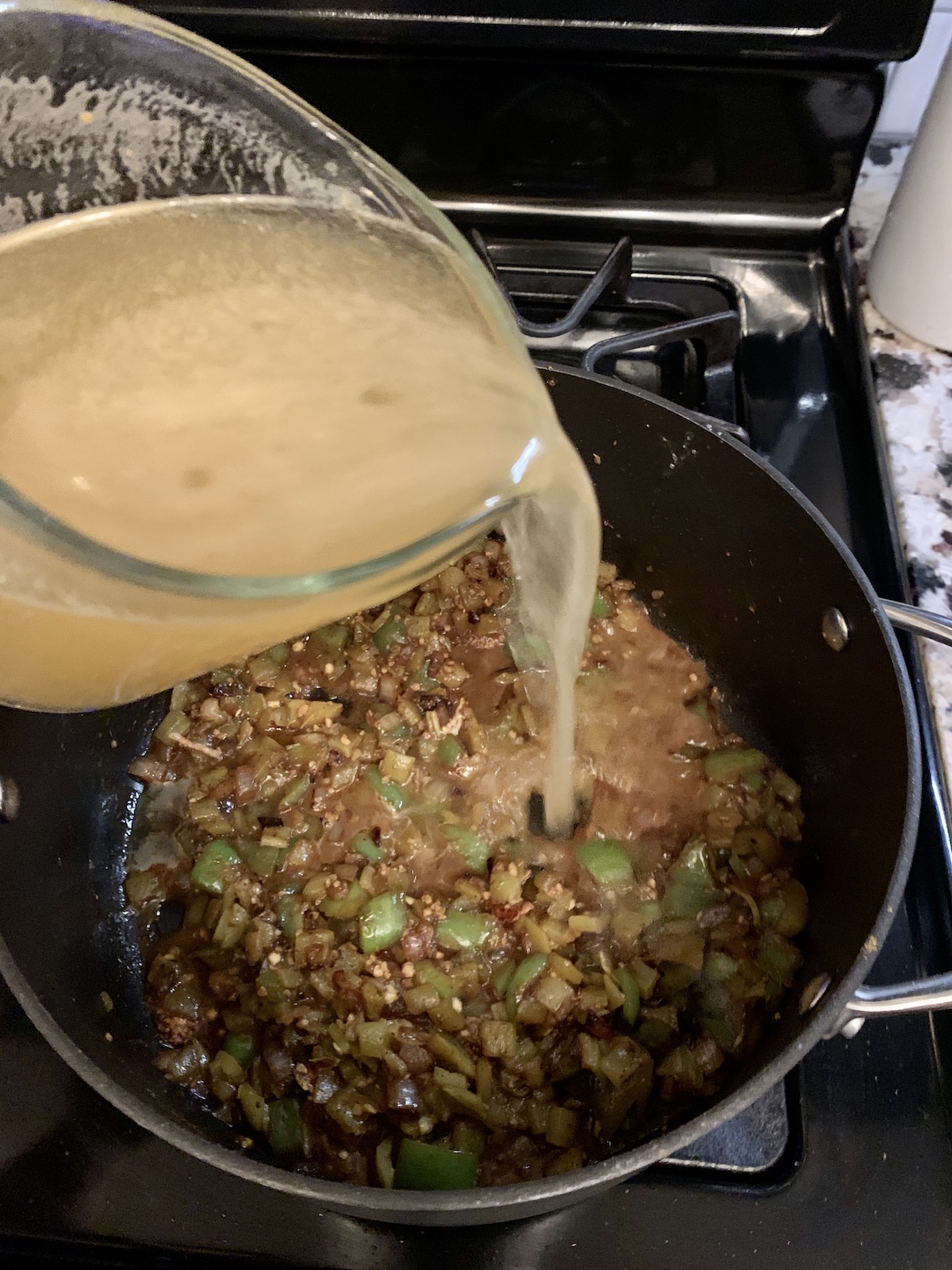 Add the chicken and simmer about 15 minutes.

While the soup simmers, soften the cream cheese in the microwave. Stir in the heavy cream and mix until well-combined. 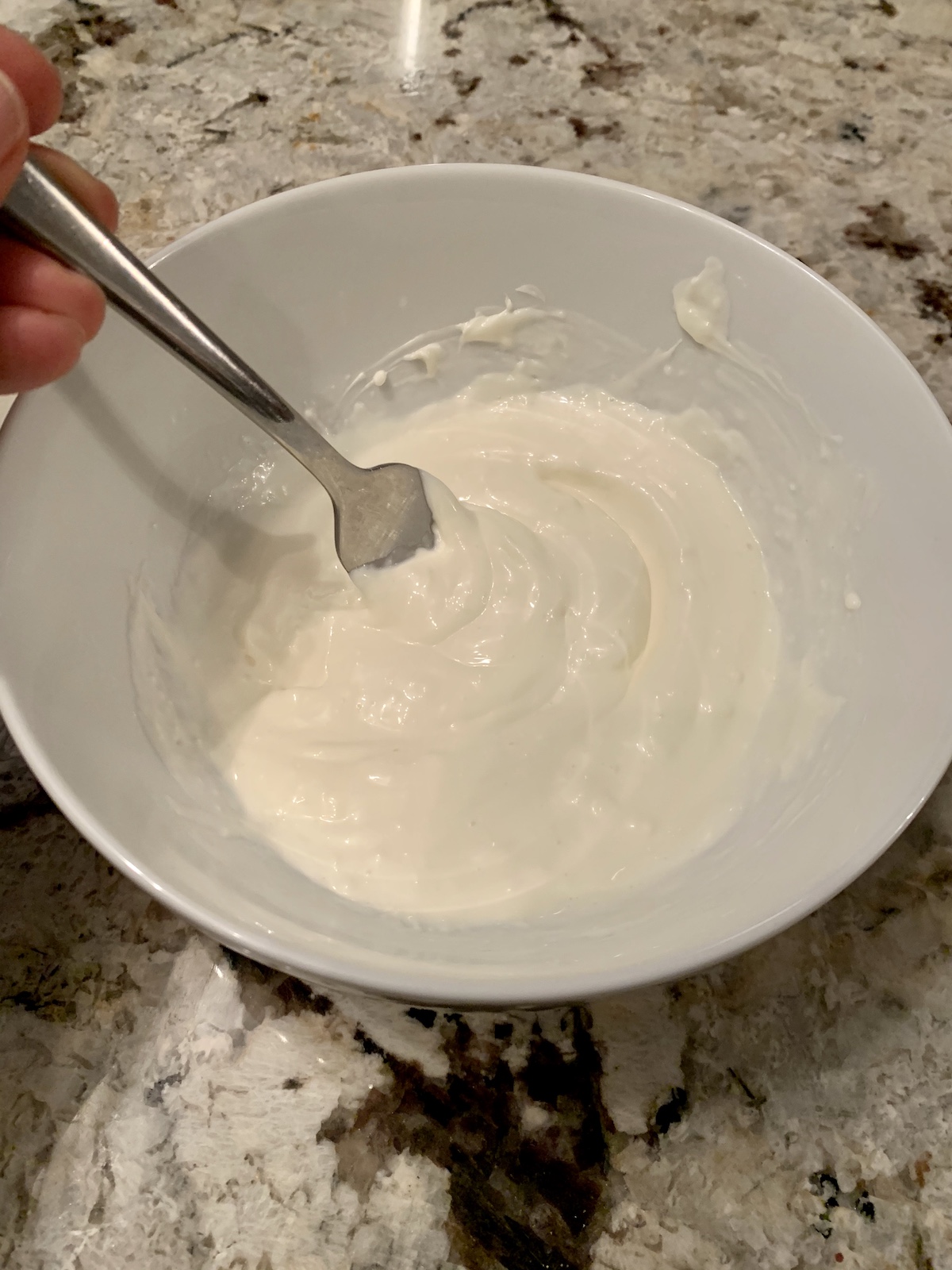 You’ll turn off the heat for the soup before stirring in the mixture above. I use a rubber scraper to get in into the pot, and then you can stir until it mixes in quite well. 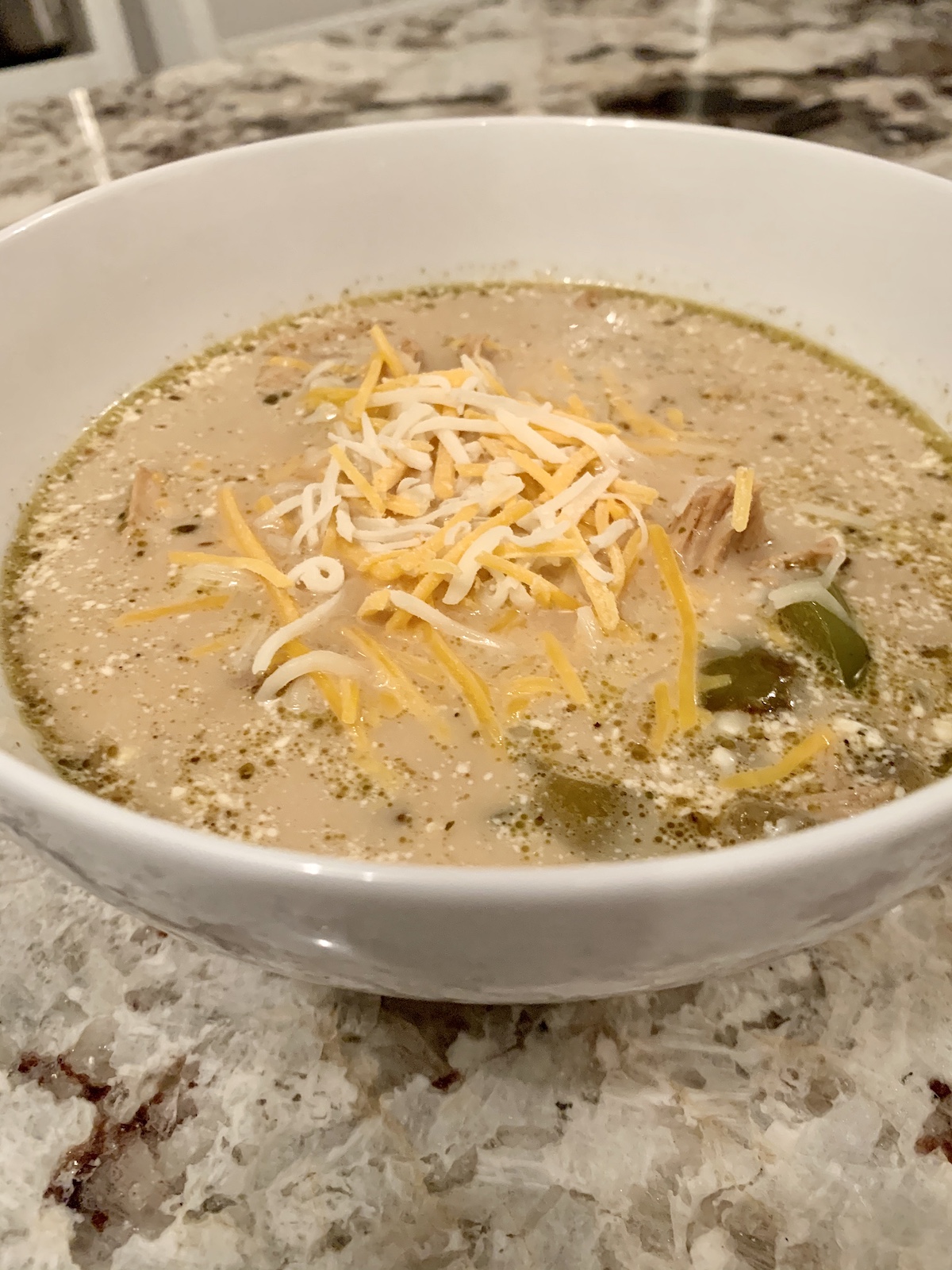 As an option, you can add shredded cheese before eating.

I cook a third chicken breast when I make this soup. One of my kids doesn’t eat soup, but he loves chicken. I also slice up extra raw peppers (red, yellow and orange) to feed them on the side, since cooked peppers aren’t their favorite, but raw ones are.

I don’t ever have to add salt or pepper when this recipe is prepared as stated.

You can add 1/4 tsp cayenne pepper if you like it spicy.

For recipes like this, I prefer the pre-minced garlic. There’s enough chopping and prepping that it’s one less thing to do.

I use powdered chicken stock. It takes up less space, and it’s easy to make. While I’m cooking, I heat up two cups of water for 2 min in the microwave, and then add the appropriate amount of powder. When the soup is ready for broth, I dump those 2 cups in. Then, I do the same thing, until I’ve added 5 cups. I know people who prepare the broth in a separate pot, but I can put my measuring cup in the dishwasher without using another pot.

This breakdown is based on this recipe making 4 servings. 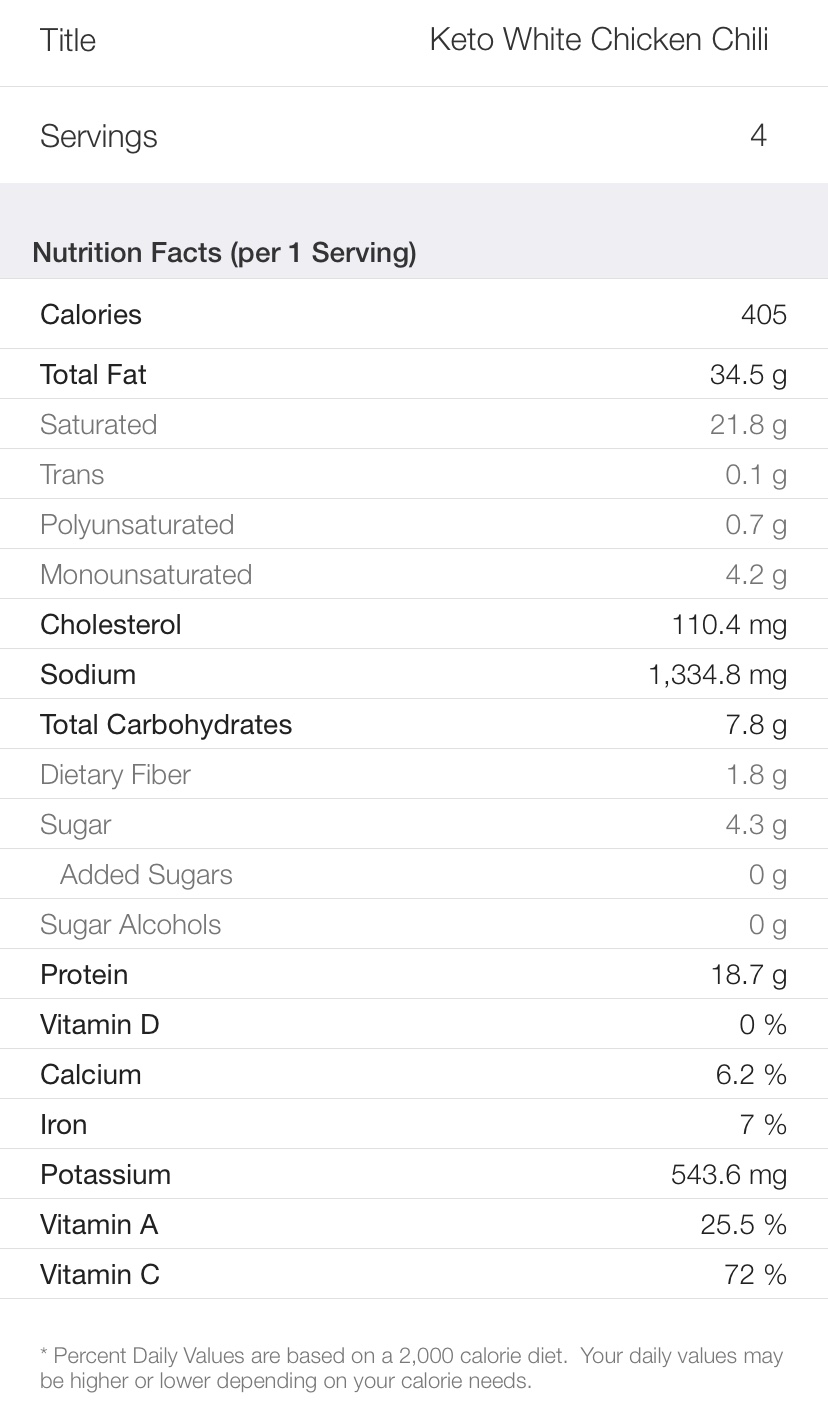 And with the shredded cheese added at the end… 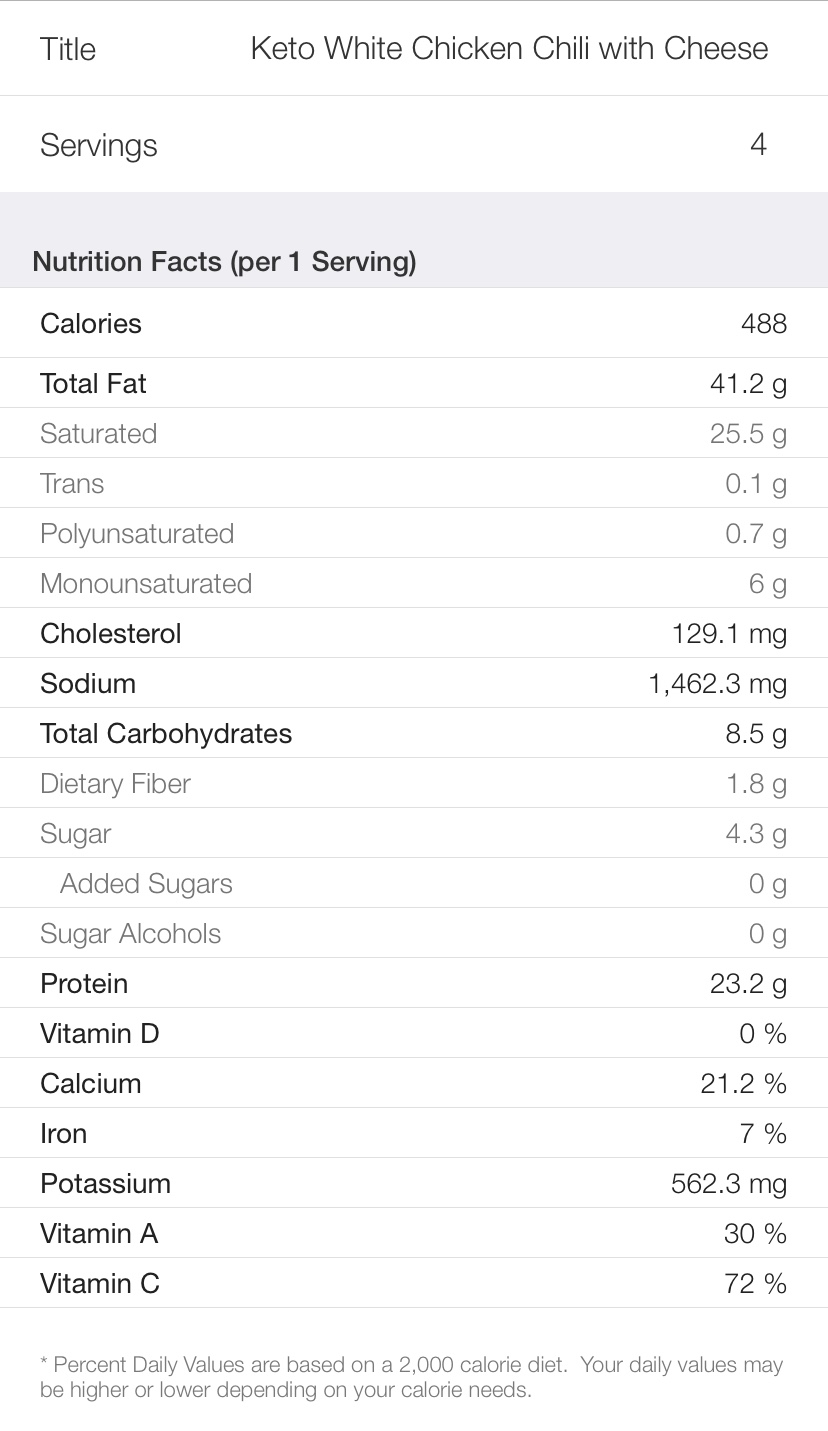 From Playroom to Plant Room… What Women Really Want for Christmas