Batavia Youth Football: The Making of a Team

“Are you signing Dexter up for football?” My neighbor, Kristen, asked me after running into her one day. “Ummm…I don’t think football is in Dexter’s future.” I laughed, remembering how all three of her boys were incredibly athletic. Simply put, they live for sports. Don’t get me wrong. Dexter’s fast. But, he’s not a big kid–by any stretch of the imagination. She followed up my comment with, “Oh, no–it’s not like that. He’ll love it–no tackling.”

Dexter’s always been an energetic kid. He almost needs to be involved in activities to stabilize him. Soccer had been our thing for a few years. Maybe football would be okay? Then, I remembered how, after we had signed him up for a local soccer league one spring, he got his foot stepped on during the first practice. He sat out the REST of the SEASON. No, football was not for him.

It’s Up to Dexter.

As time went on, I heard a few more parents talking about it. Some of his friends from Kindergarten were going to be involved. I made a decision. I would leave it up to him. He’d never even thrown a football, let alone caught one. Surely, he’d say no, and we’d just move on.

Turns out, football’s a big deal in our community. We chose to move here when Dexter was just over a year old; Scott had gotten transferred for work. We picked Batavia for the school reputation–academically–not knowing anything else it had to offer. Each and every year we’ve been more and more impressed. But, almost everything else pales in comparison for the pride and morale of the sports teams. Apparently, the football team has been state champs more than once, and I was about to find out why.

The kickoff for the Batavia Youth Football program shows just how dedicated everyone in the program is when it comes to the success of the organization. While the kids spent time practicing with their teams, the parents were welcomed with an overview of the program. They offered words of pride, insight and intention.

They explained how the older kids are taught to give back, depending on the level they’re at. Some referee games. At our level, in first and second grade, the high school kids come to the Saturday morning games to be the quarterbacks, to coach and to practice with kids when they’re sitting out. After having experienced this for a couple years, I find this amazing. Not only is it great to see these older kids giving their time, but the younger ones absolutely love the experience, and no one cheers louder than the high school kids when a touchdown is scored. The program is solid gold.

I have to admit. I felt like a bit of an outsider. The only reason I went to football games in high school was because I had to. I was in marching band. I had all sorts of anxiety. He’d never played the game. He didn’t know the rules. He’d never thrown a football. He’d never caught one, either. You know what he had?

Somehow, Dexter ended up with these amazing coaches. For one thing, their love of the game is transparent. But, even more so, you could see just how much care they put into each and every player. They were inclusive–no matter what skills anyone had or didn’t have. They rallied the boys to be a team, to work together, to play together, to learn from their mistakes together. They kept morale high. They gave high fives for anyone who achieved just beyond their skill level. They let the kids have fun, but they kept them in line.

It took me a couple practices, but I finally admitted to one of the coaches that we’d never really played football–it was like removing this enormous weight from my chest. His response? “That’s no big deal–he’ll get there. We just want the kids to have fun and start understanding the game.” And, that was that. They tried very hard to ensure every kid had equal playing time. 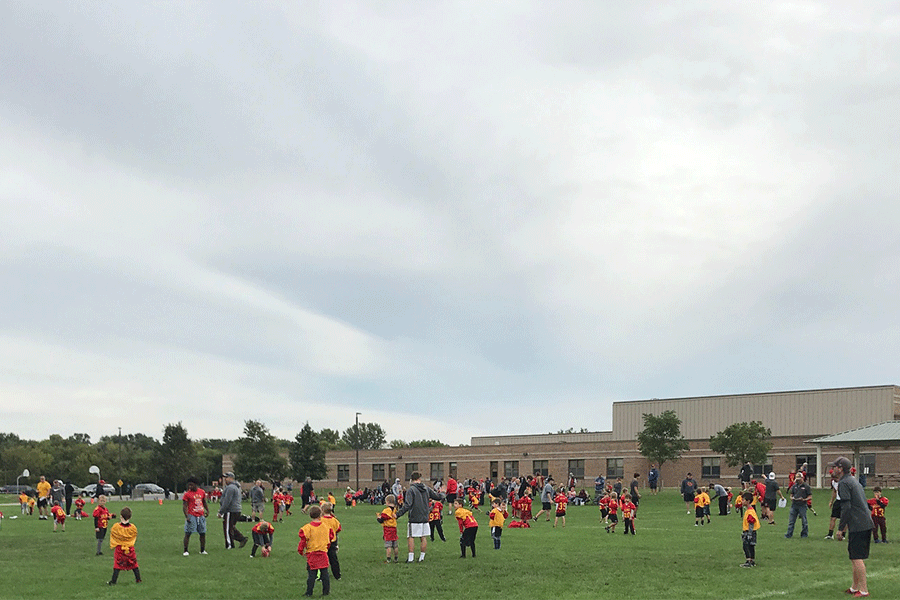 They quickly recognized that Dexter probably wasn’t going to be a strong catcher, and while they continued to work with him, they also noticed that he was fast. He became an option any time they wanted to run a play.

They gave him a nickname. My son. The one who wasn’t going to be good at football. A nickname. “The Dex Factor” came out when he completed some kind of fast, running play during practice, and that nickname has stuck to this day. 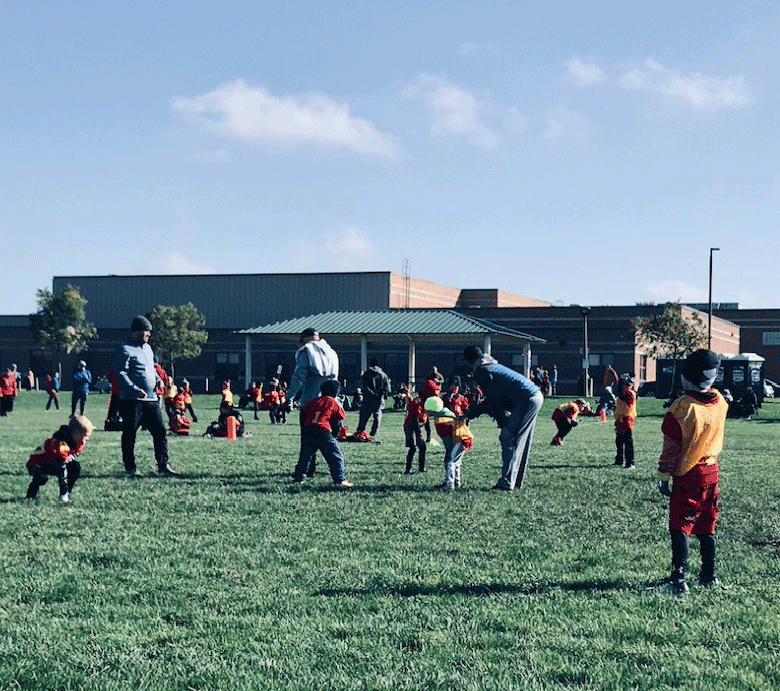 And, because he’s fast, his favorite position on defense is rushing the quarterback. They stand behind the rusher, talking them through the play, and as soon as they’re allowed, they let him charge the QB. His favorite memory, to this day, is when he sacked someone.

The Making of a Team

Being part of the Batavia Youth Football program–and subsequently the baseball program, as well–has made me realize how very lucky we are to live in a community where the coaches don’t just teach how to play the game. They bring their players into the fold, help them develop their skills, coach them out of their comfort zones–and make them part of the team.

Was I wrong to think this was a place that Dexter didn’t belong? Of course I was, and I’m glad he–and everyone involved–proved that to me.

I’m sharing this experience in honor of all the amazing coaches Dexter has had over the last two years, but especially Coach Prescott, who dedicated so much of his time to the kids of this community. It was a privilege knowing him. 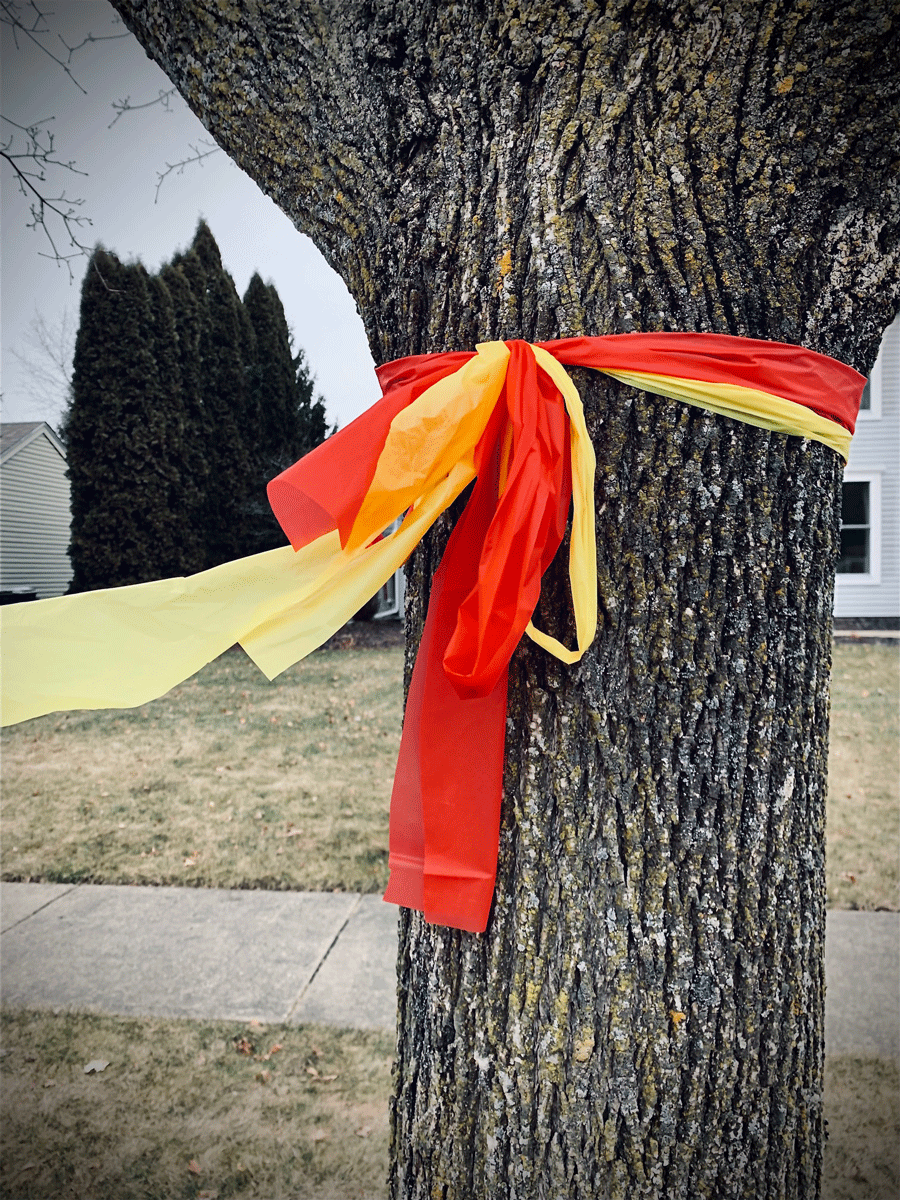 Valentine’s Decor Inspiration! Quarantine 2020: How to Deal When You Can’t Deal

The Life Lessons of Baseball

The Wizarding World of Harry Potter: A “Must Do” List