For Week 5 of the One Room Challenge, we are finally getting around to our Patio Extension Project we’ve been wanting to do for…well…years.

We have a decent sized patio. Because it was originally surrounded with lattice fencing and a jungle of trumpet vine, there is a retaining wall of pavers and a “moat” of dirt + mulch. Once we ripped out the vines and the fencing, it opened up the look, and we planted patches of ornamental grass–making the best of it. 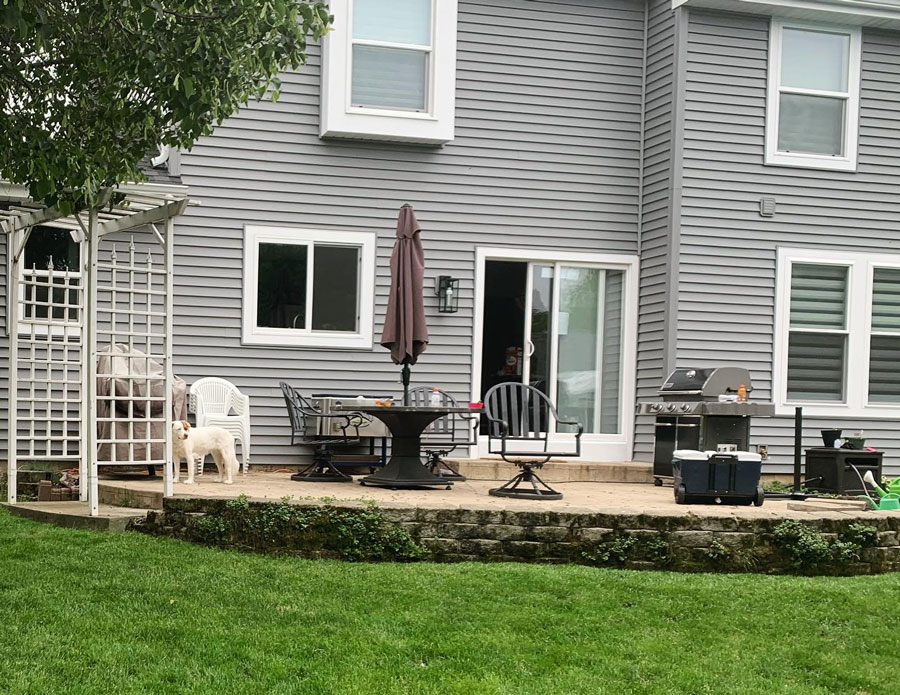 I loved the moss and sedum that came back each spring. The dogs and the kids loved dragging the dirt and mulch all over the concrete and into the house. 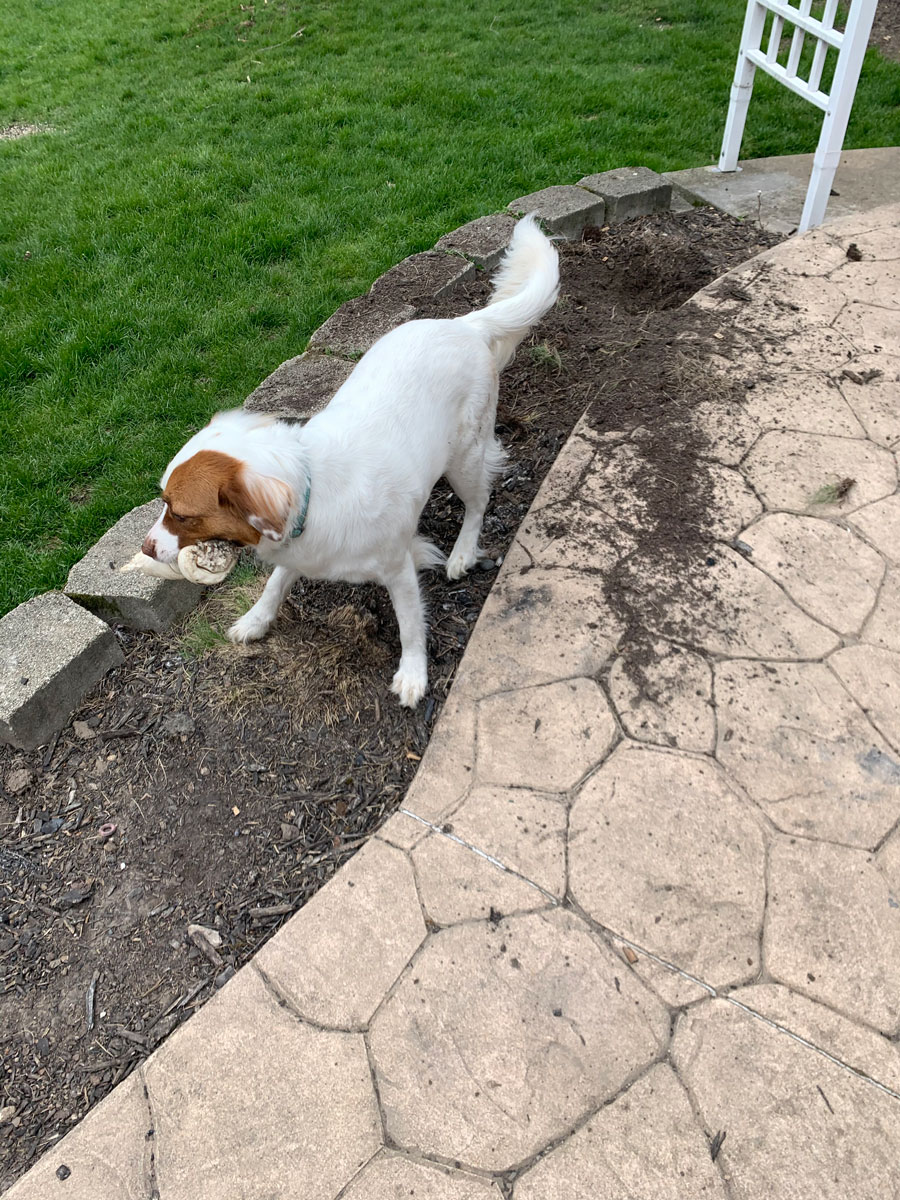 The mulch had to go. I have continuously cleaned mulch and dirt off the patio and throughout the house for long enough. Plus, even though the patio seemed big enough, that two foot section really wasn’t usable, so it seemed like we were kind of squished. Ohhhh…and I have witnessed so many people–children and adults–tripping UP the retaining wall because it’s about an 18″ step. Ridiculous. Time for renovation. 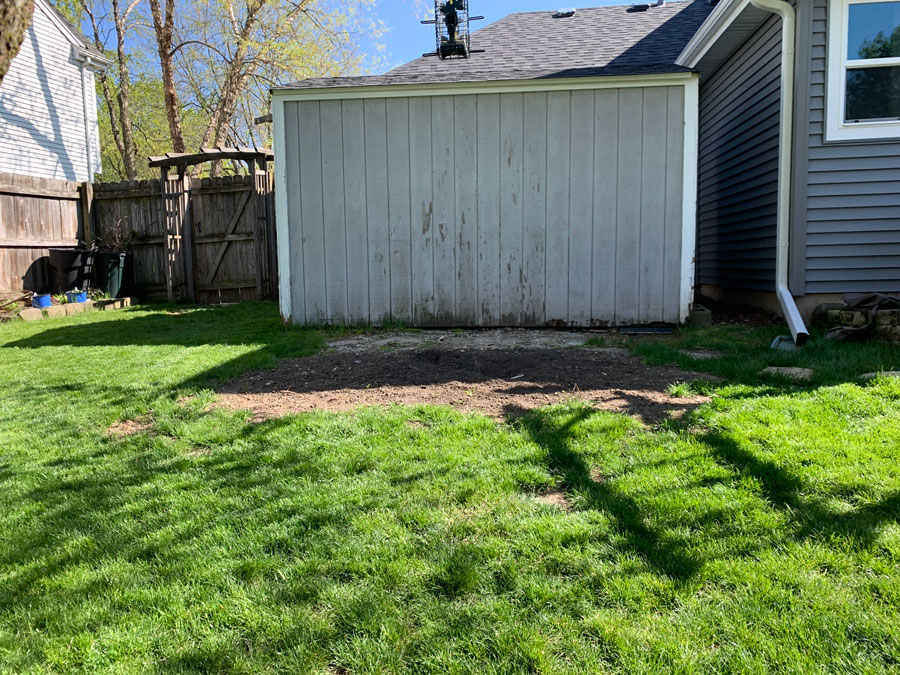 Plus, we had a plan for this eye sore of an area here in our yard. We wanted to do a patio extension project that brought a concrete pad here. We had ripped out the raised garden bed and had grand plans for this area.

How to Do a Patio Extension Project…

So, extending the patio to this concrete pad, we wanted the two connected. But, we how could we extend the stamped concrete patio?

We brought in the experts. We consulted with Joel Swanson of CCSD to figure out what was possible. He took measurements, asked questions about shape, size, color–and he determined how we could connect the two areas. This included getting rid of the faux entryway onto the patio with the trellis and concrete step. 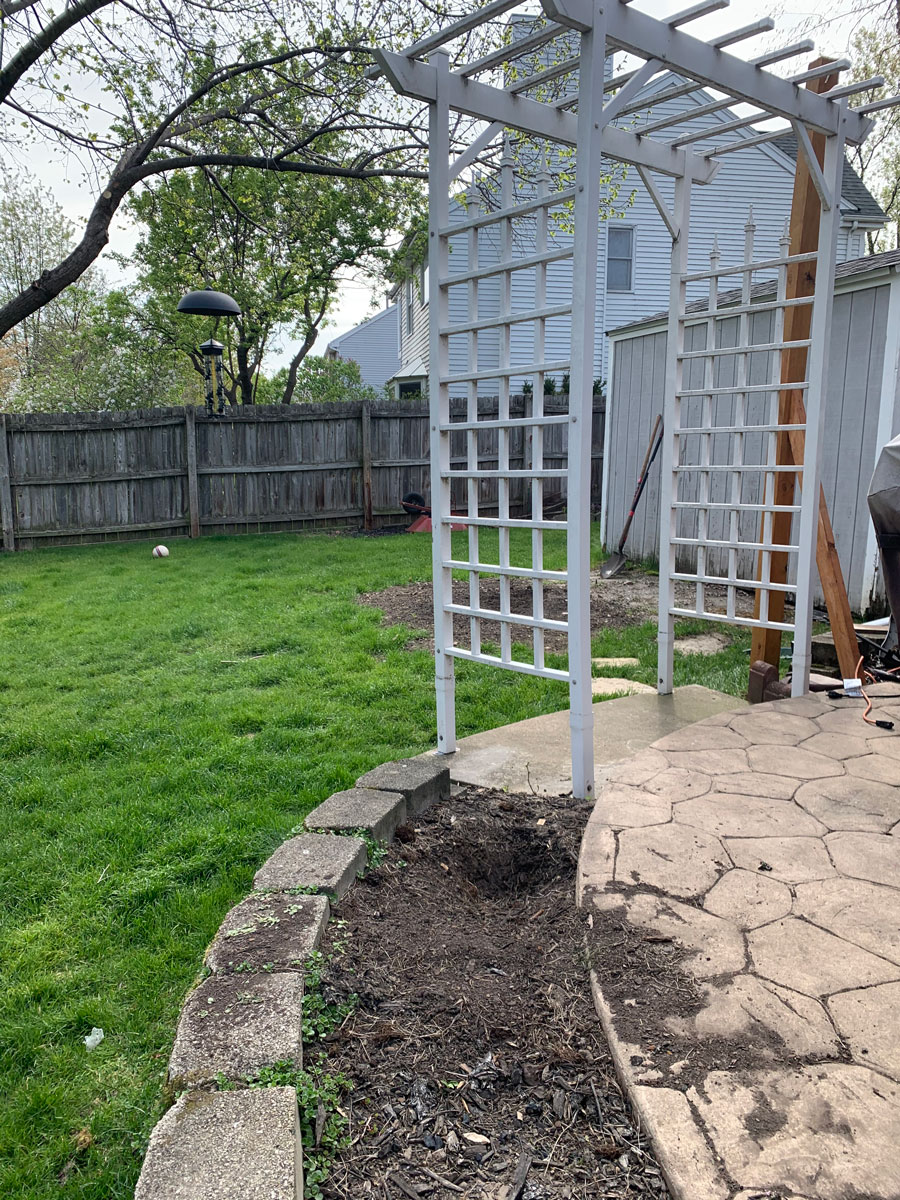 By all means, they can get rid of the step and the trellis, but that trellis might need to be re-used in another area of the yard. (I promise I’ll spend way too much time thinking about where to place it.)

The plans were set in motion. With a busy season already planned, we had just over a month to wait for the crew to come in.

Scott and I are always biting off more than we can chew when it comes to these projects…or maybe we’re just poor planners. Regardless of which, the day before the crew was set to arrive, we were at the end of our quick vacation weekend visiting family 500 miles from home. At 2am, we packed the car with suitcases and kids to drive eight hours home. Getting home at 10am, we realized we had a lot more work to do than we thought. 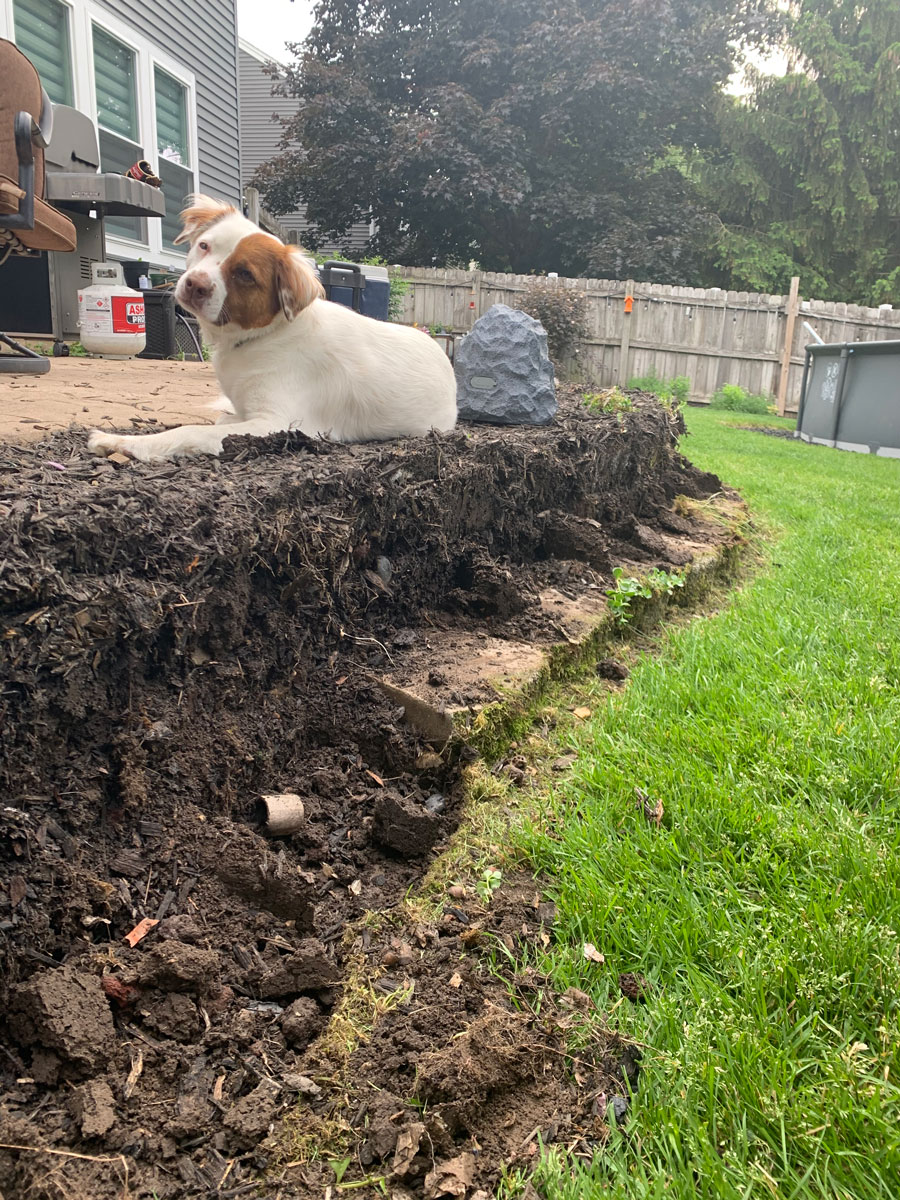 That retaining wall surrounded the patio. Four layers of pavers…that’s right. Four. There’s a layer under that “bottom” layer, completely submerged in 28 years of dirt. We moved a lot of pavers. A lot. 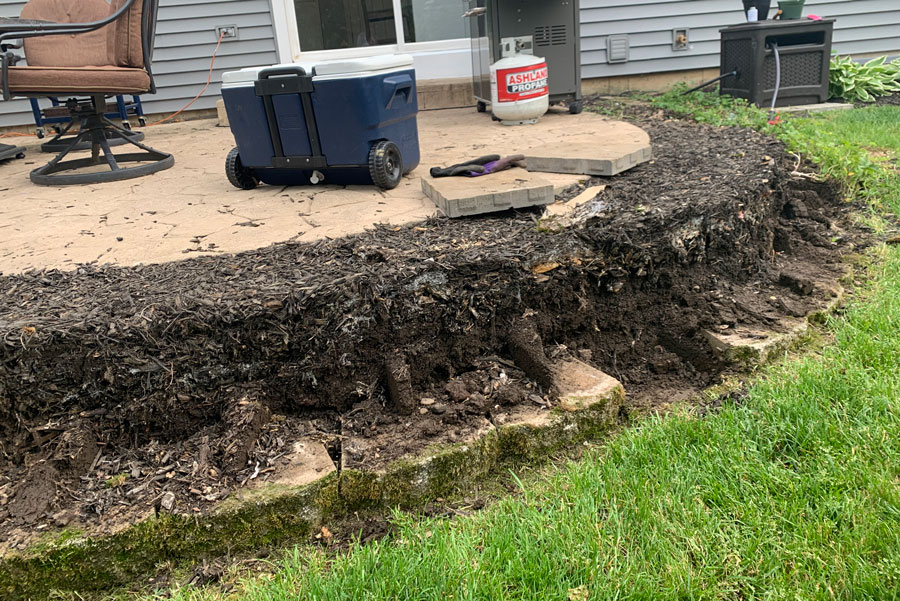 These guys had a long day ahead of them. They started with the removal of the one and only step–after taking down the trellis. 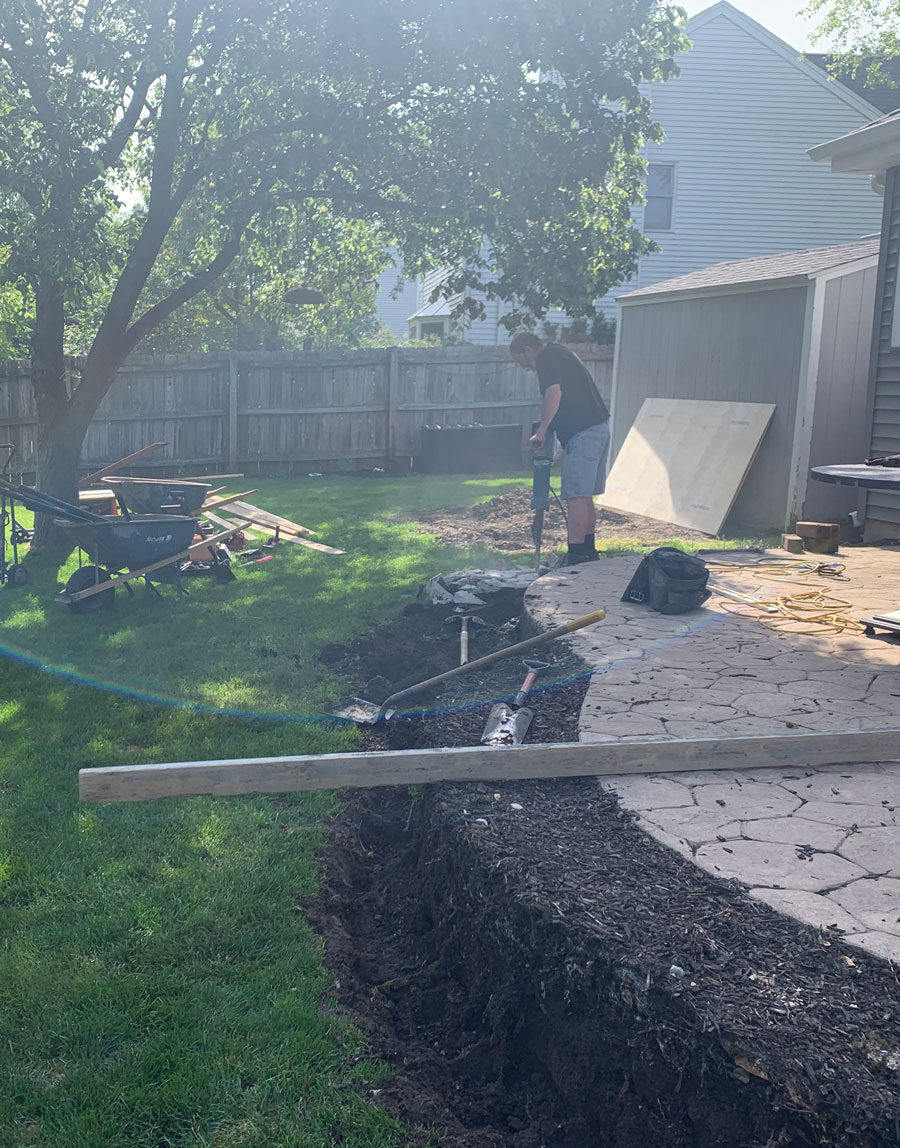 Next, they had to remove the dirt from the retaining wall. Because it was nothing but soil with layers of worms and composted mulch, the Batavia Community Garden was thrilled to accept it as a donation, and Joel was awesome for delivering it. 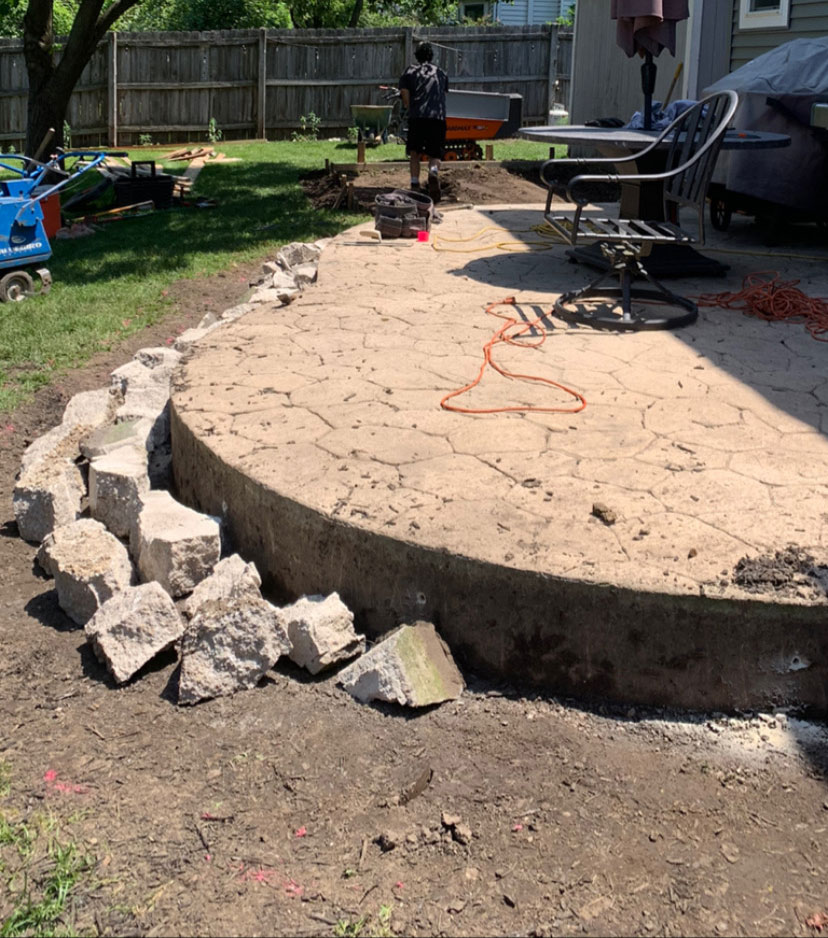 They prepped the area with these large rocks–which is a very clever way to take up space! Notice the drilled holes in the concrete that will allow rebar to be added. This will connect the poured concrete to the existing stamped concrete patio. 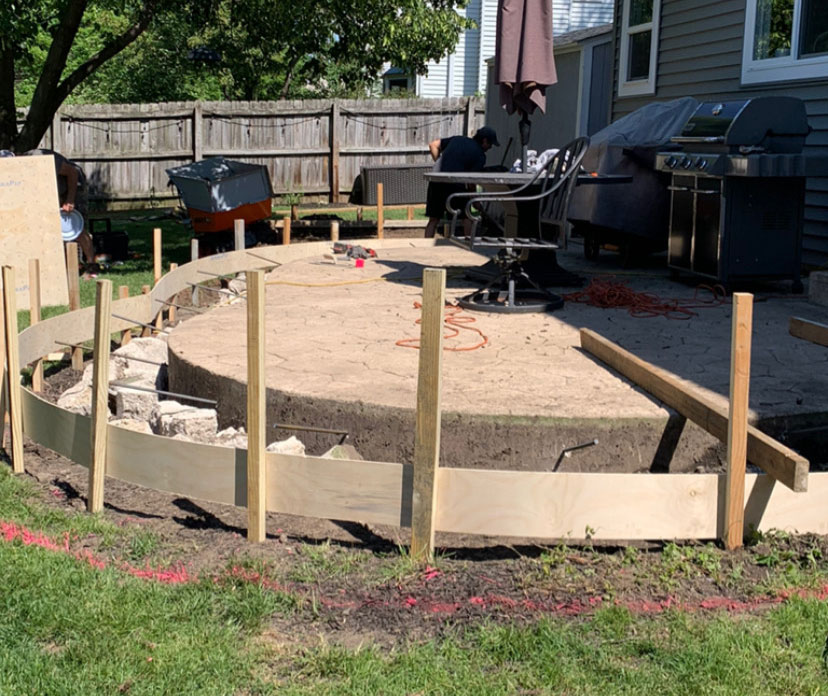 The first border was put in place. The next will be for the step down, placed where the red line signifies. Rebar is in place. 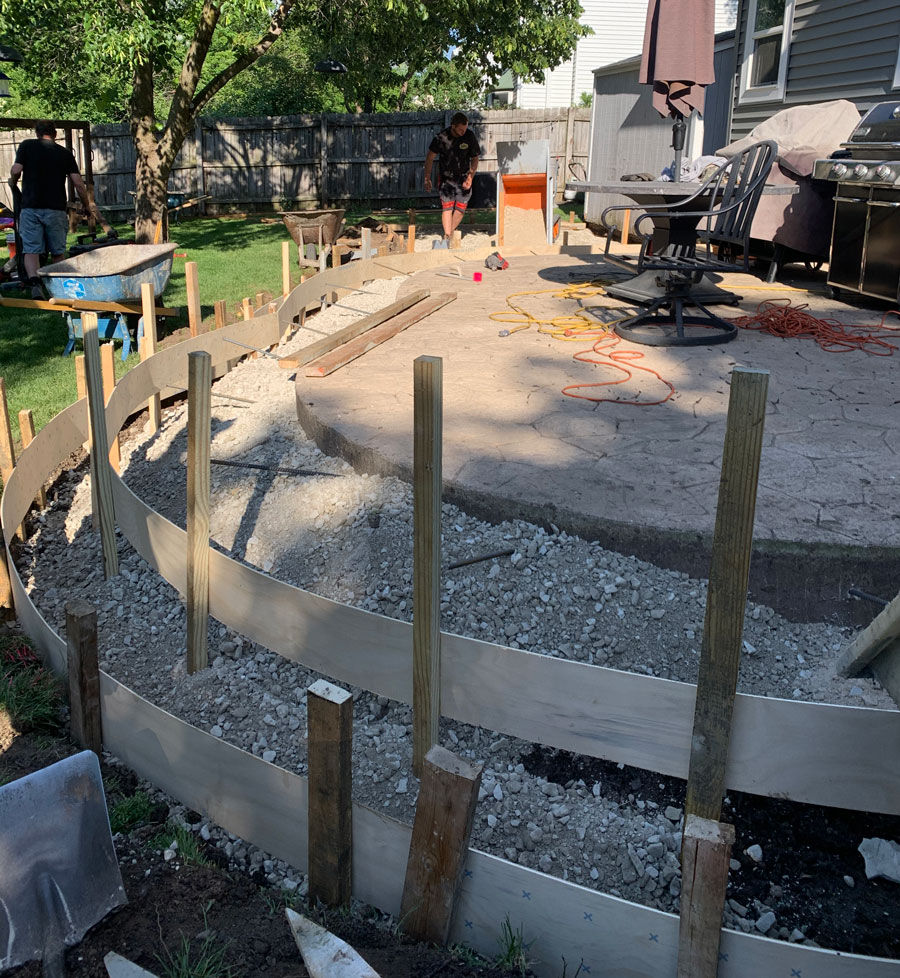 After adding the border for the step, they filled both areas with paver base. 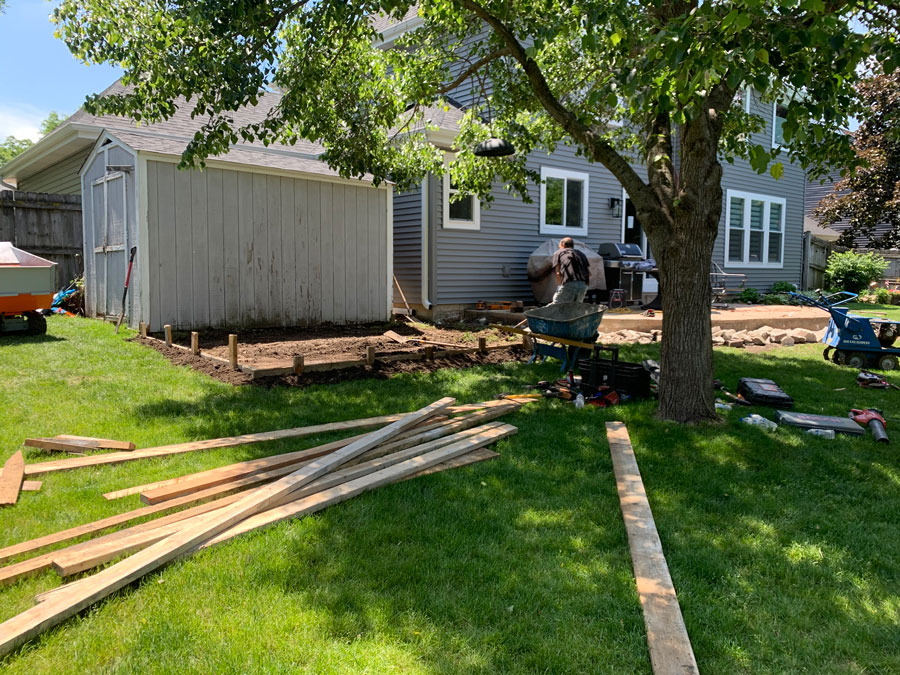 They prepped the concrete pad area in front of the shed. 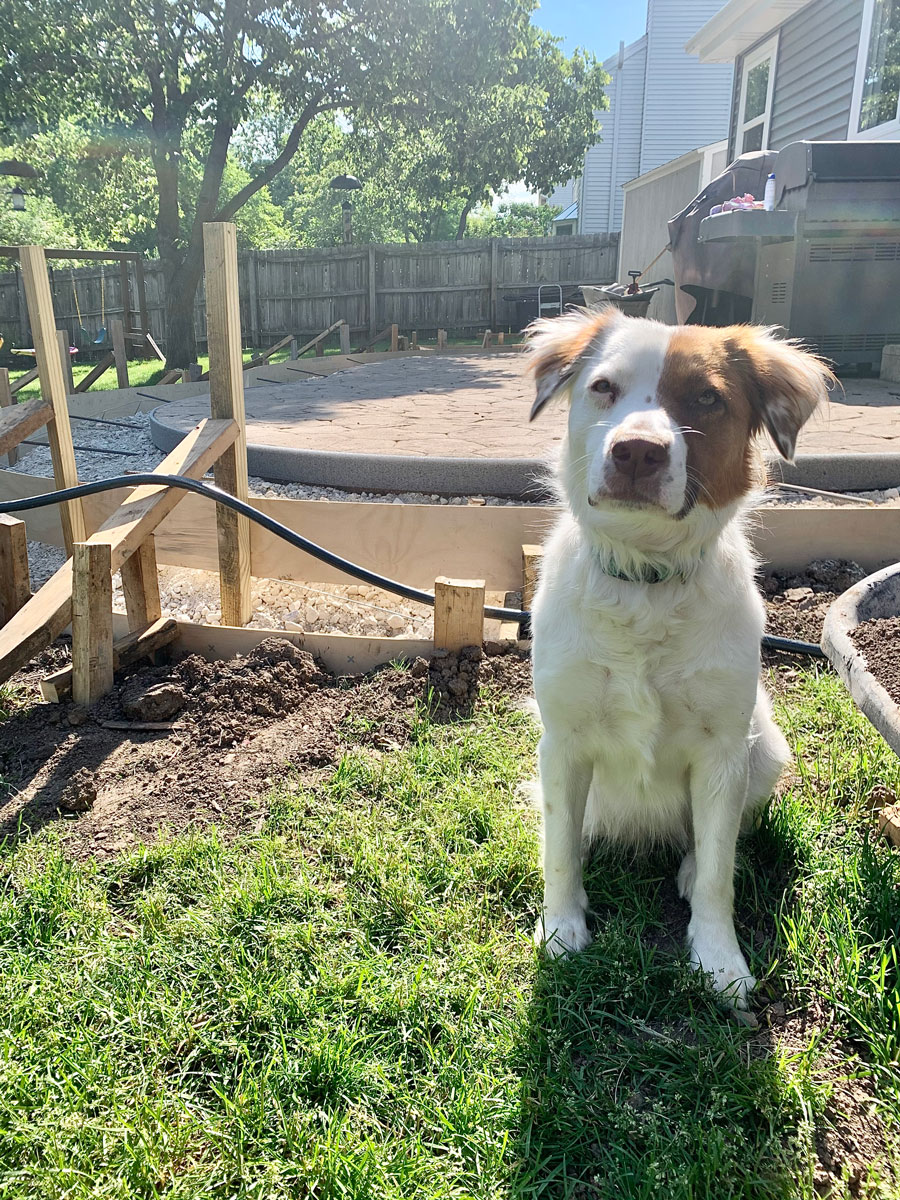 Now, all we have to do is wait. And hope no one impales themselves on rebar or wood.

Only a few days of waiting and we were watching the concrete truck pull up in front of the house. 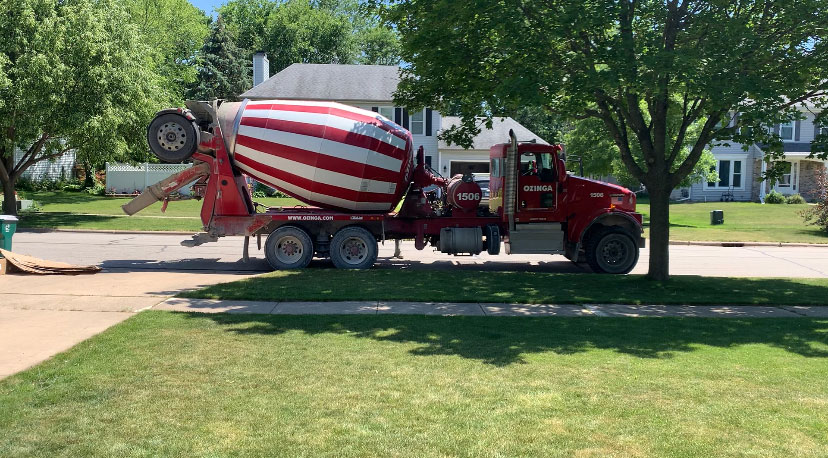 I’m not sure who was more excited…me, or the kids. Who are we kidding? It was definitely me! 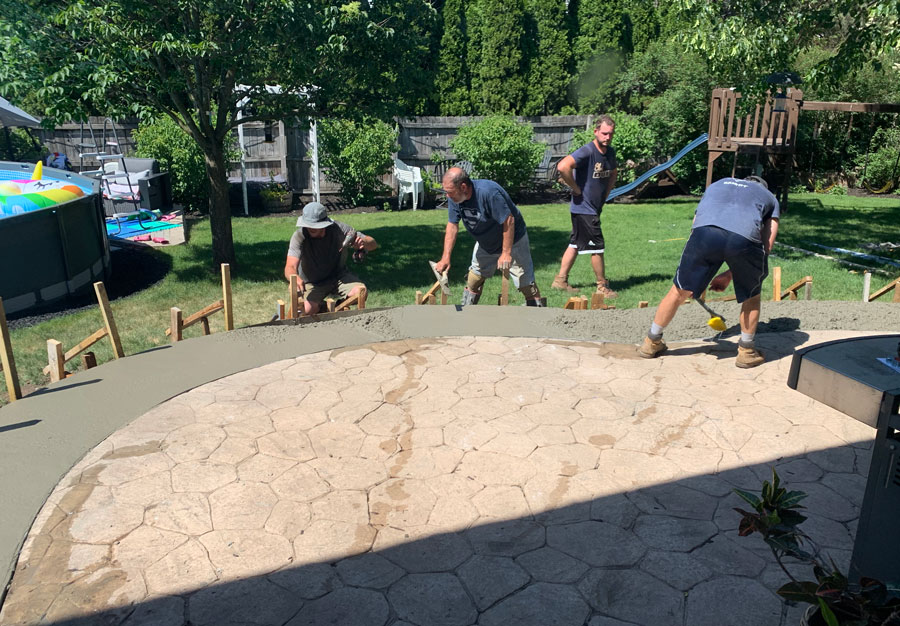 I didn’t want to swarm them, documenting every step…I probably seemed pretty creepy taking any pictures at all. But, it’s a pretty cool process to see! 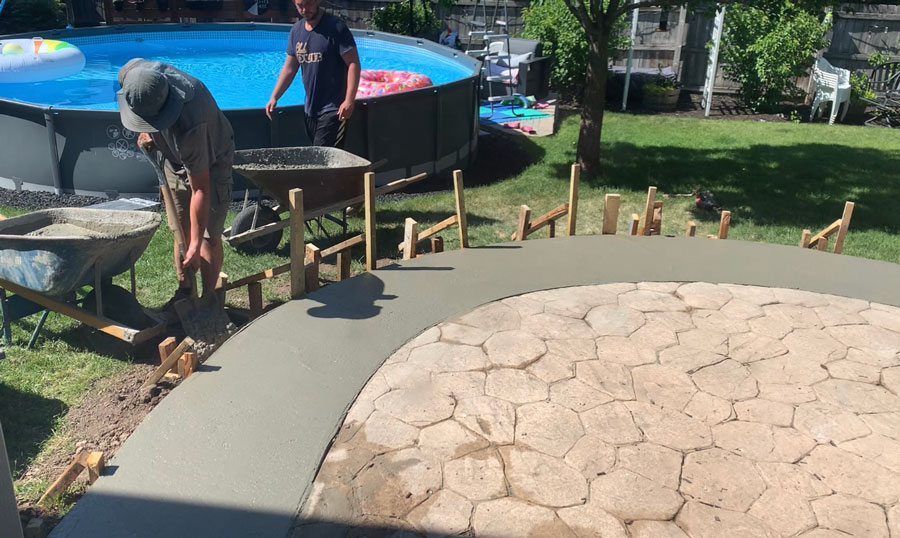 They poured the steps by the shovel full, and I was sweating just watching them! Phew. 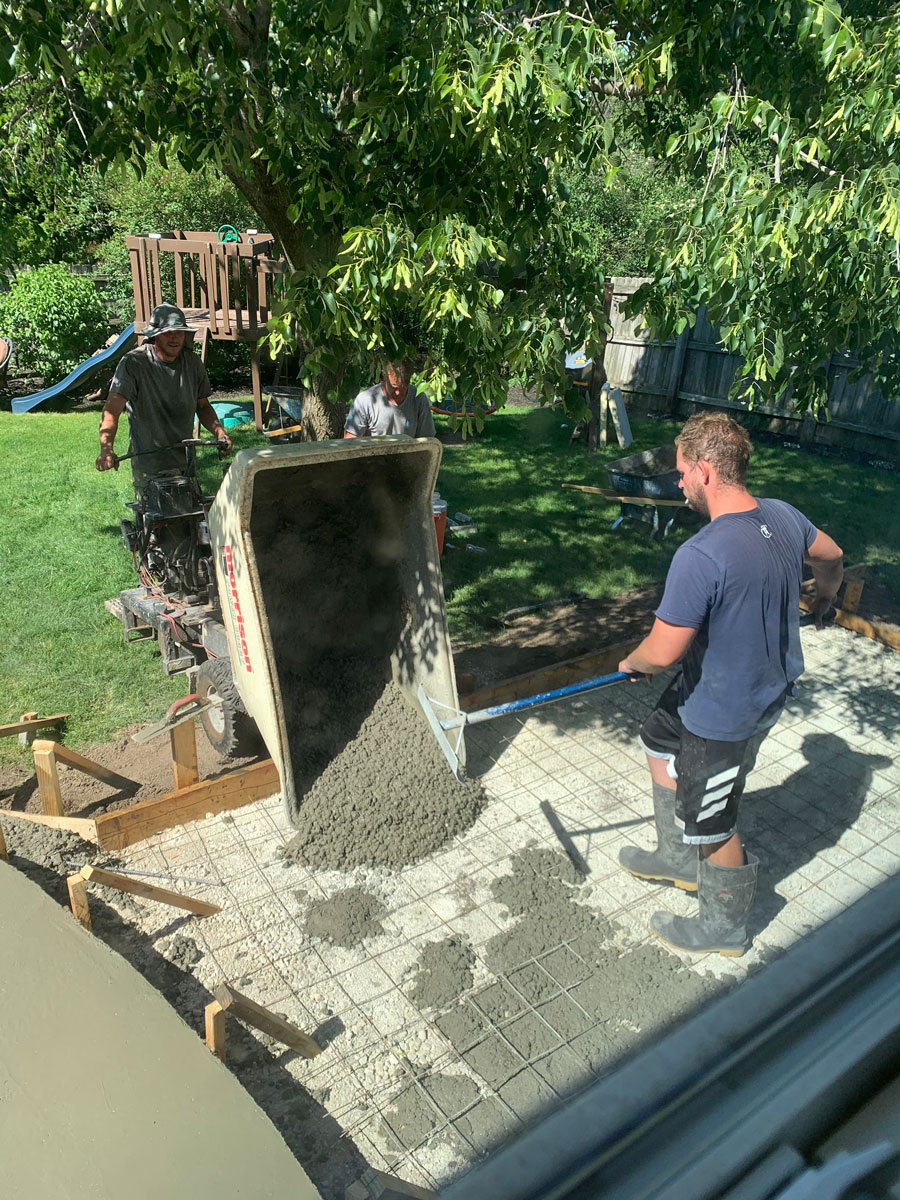 The concrete pad being poured.

It wasn’t too long after this that they were able to remove the wooden border pieces around the stamped patio extension. 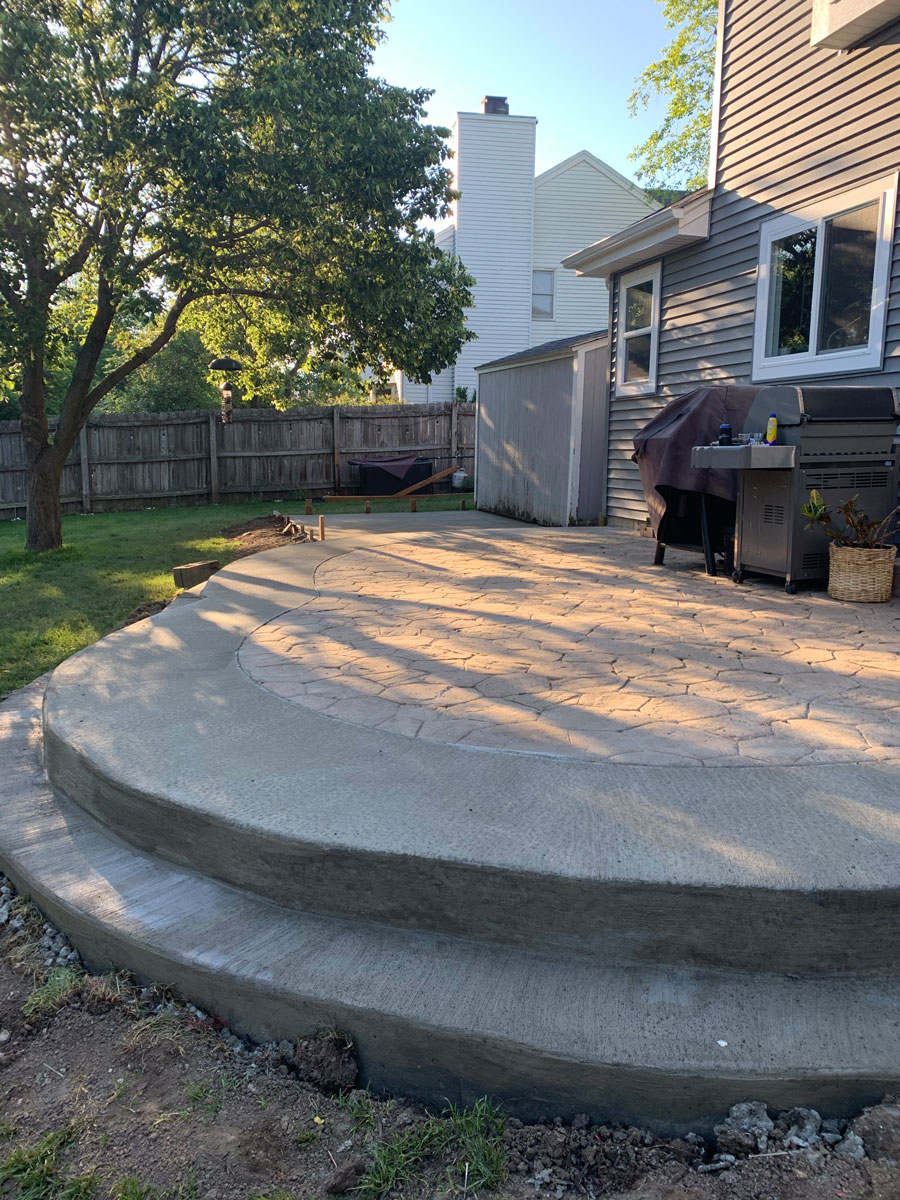 The next morning…we were able to walk on it, making sure to spray it down every few hours as it cured. The sunshine will bleach it, removing any blotches. We had decided not to add color to it, and I’m so glad we didn’t. It looks great as is! The wooden braces around the concrete pad will be removed early the following week.

This patio extension project being completed was such a win for this backyard of ours. I can’t wait to style the new space! Keep up with this project in my stories and posts on Instagram.

10 Ideas to Combat the Winter Blues

I Hired a Professional Organizer. This Is What Happened.