My Alocasia Polly had been a wishlist plant. On my birthday, we found one at Lowe’s. I honestly had no idea how to care for it, but…baptism by fire, right? This is the story of how I turned my dying Alocasia into a lesson on time, growth and hope for the future.

It Was Doing So Well.

My birthday is at the very end of the year, so I went into the New Year with this gorgeous plant. 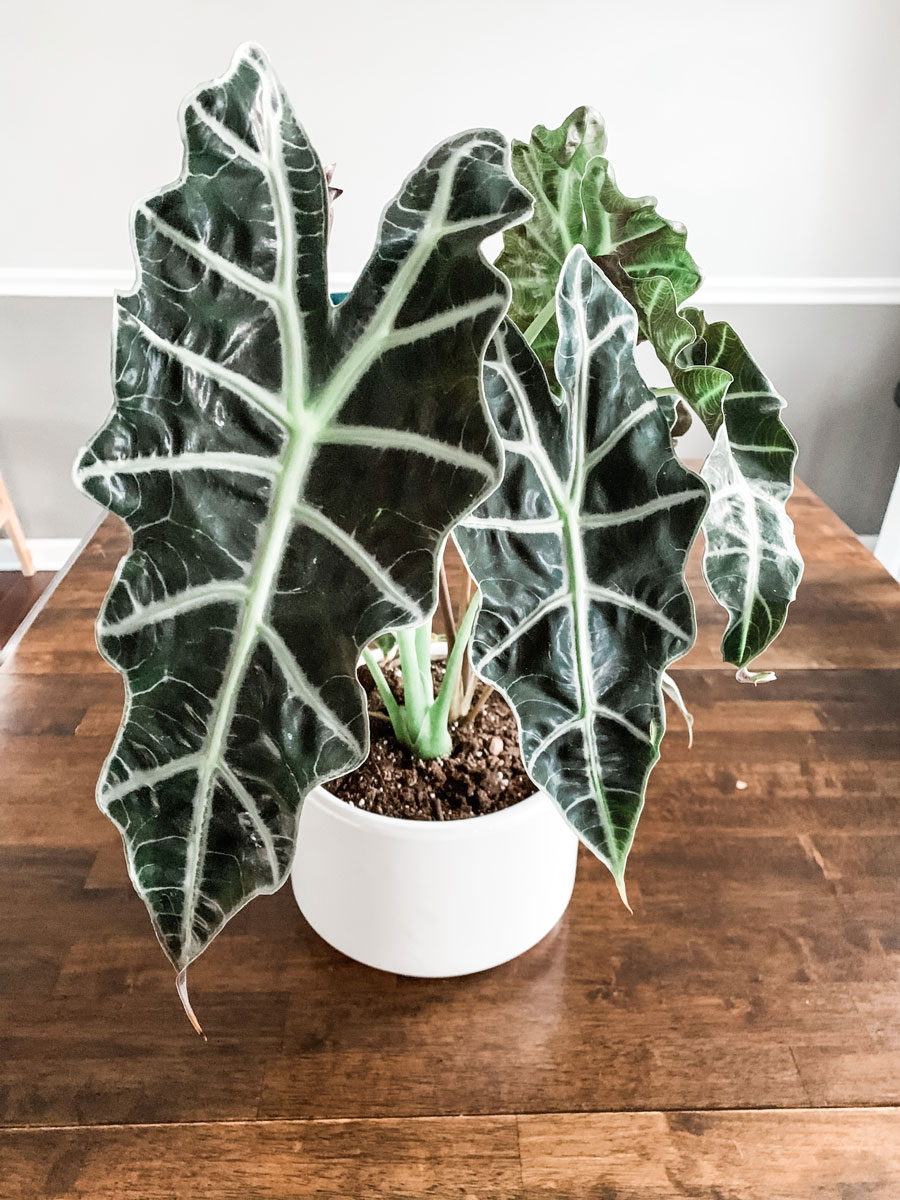 Turns out, my dining room table seemed to be the ideal spot for this guy. South-facing windows & just far enough away that it’s not in direct light.

Just How Many Plants Are There?

Because this came from Lowe’s, it was already a fully grown plant. Not knowing much about them, I saw the two stalks, and thought that it might be two plants, but left everything in place. 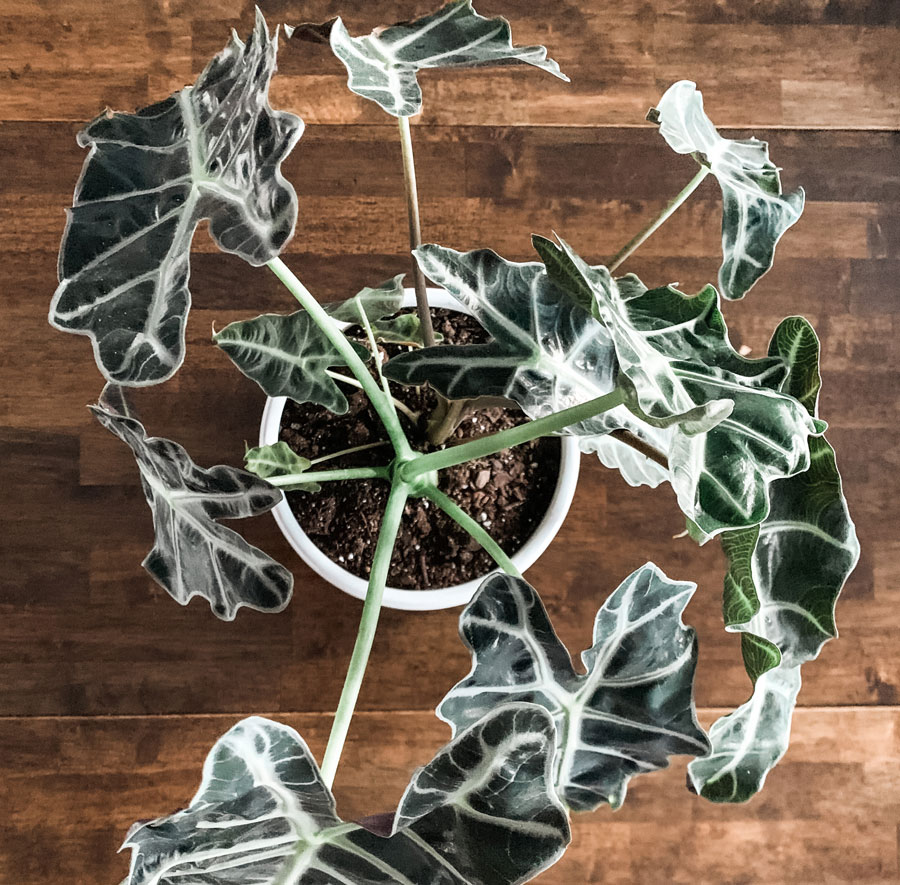 Sometimes, I take plants apart, in an effort to grow two. But, I wasn’t taking my chances with this guy. Can you see the two stalks? One is bright green, the other is more of a purple color.

From January through the beginning of May, the plant was doing well. When this picture was taken, it was mid-May, and I hadn’t really noticed the dying Alocasia stem. 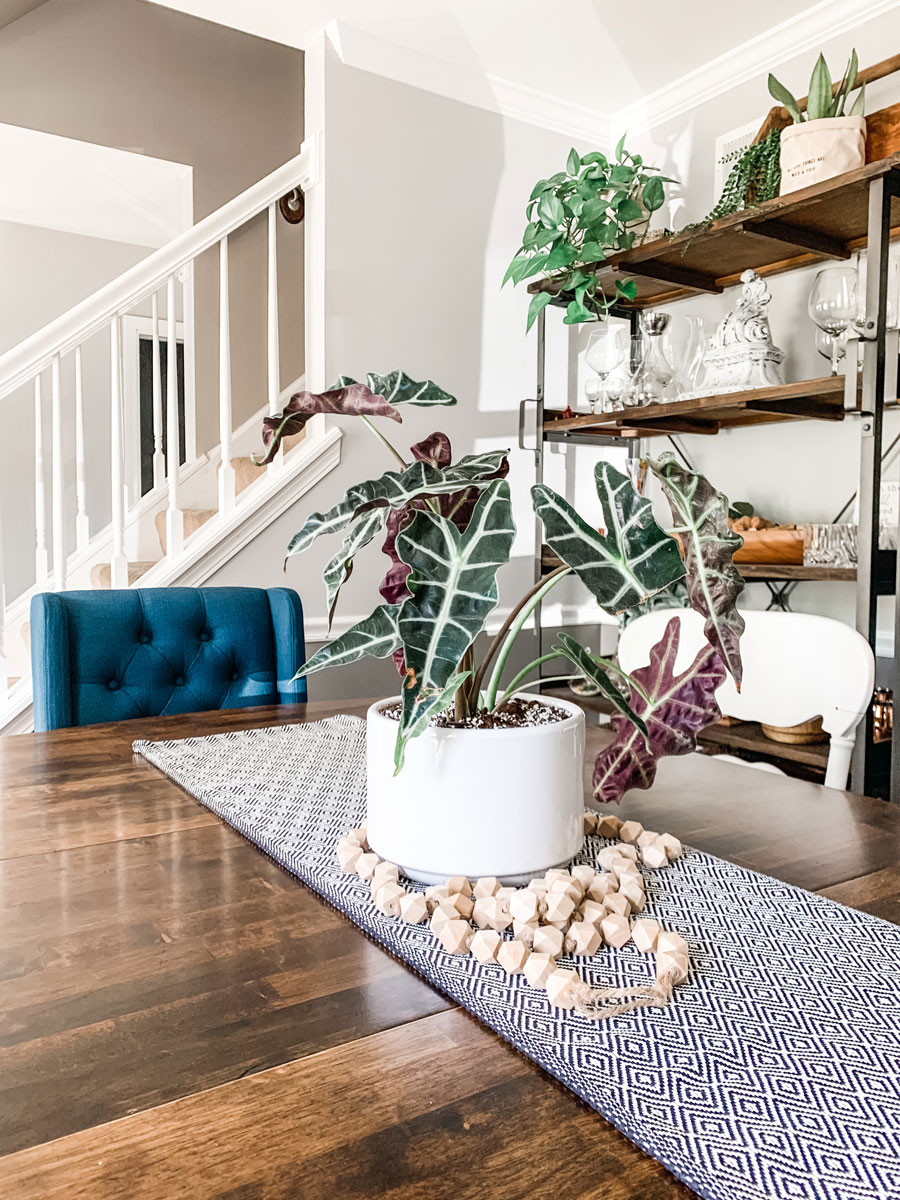 But, you can see it happening. The right-hand side is starting to droop. Never having grown this plant, I thought maybe the leaves were just getting heavy. The curved stem was the first sign.

I Had a Dying Alocasia.

As time went on, it was clear that half the plant was dying, while the other half carried on. I sprang into action, checking soil, adjusting light, asking my plant besties as many questions as possible. It had to be a moisture issue. Maybe root rot? I needed to investigate.

When I took the plants out of the soil, there were two bulbs, attached by a thick root. The plant that was fading was on the “newer” bulb. The healthy portion came from the established bulb–a good amount of roots stemming from it. Then, I saw the problem. The root connecting the two bulbs had basically been destroyed, right at the connection to the “new” bulb.

No wonder it was looking so unhealthy. There were no roots coming out of that “new” bulb, and with the one root broken, the future looked grim. I repotted them together into a better mix of soil and hoped for the best. 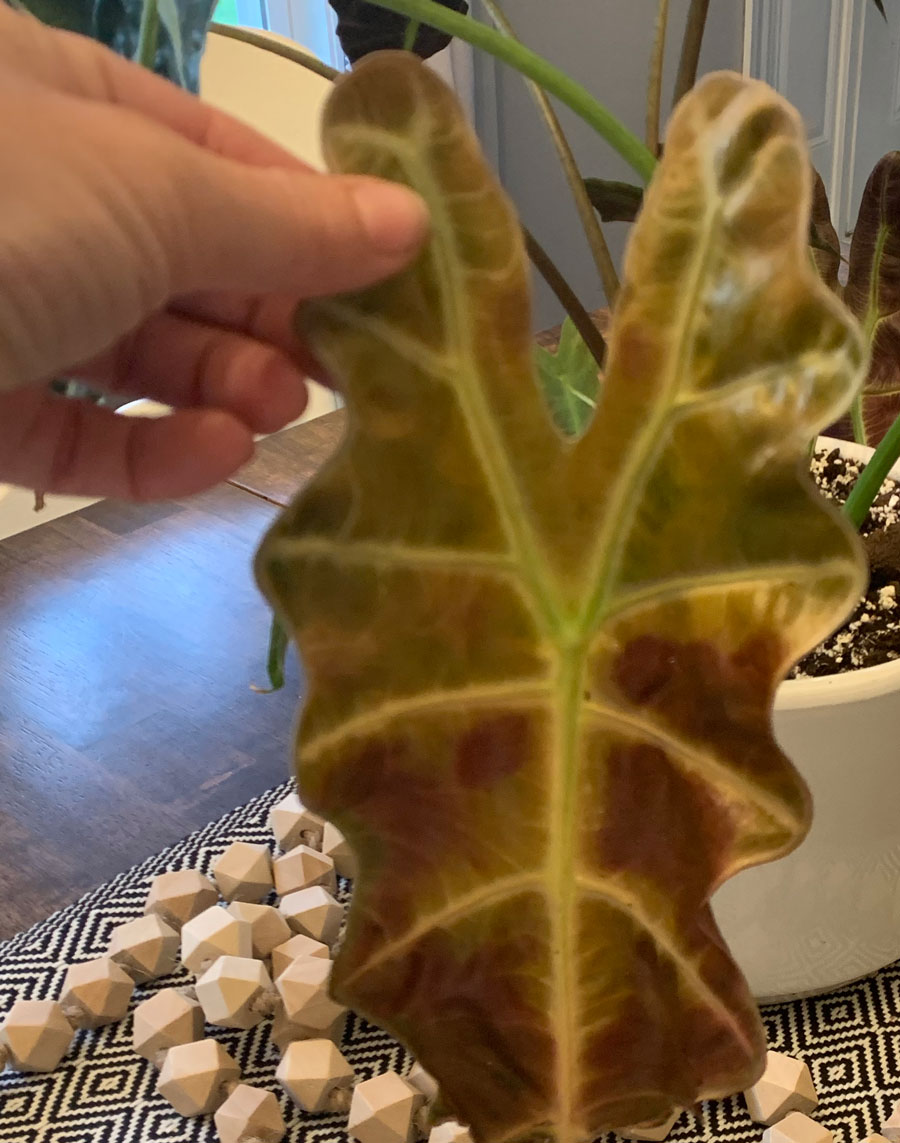 After a week, a leaf on the dying Alocasia started to go. I had a decision to make. I decided to cut my losses–literally cutting the root where it had been damaged, allowing the healthy portion to carry on.

What to Do with a Dying Alocasia?

Bulbs. They come back, right? I re-potted the dying alocasia, new bulb and all, into a separate pot. I crossed my fingers, hoping for the best.

Leaves Died, One By One.

About every 3-4 days, I lost a leaf. One side would start yellowing. The color would travel up one half of the leaf, down the other, and then fall over. I would cut it. A few days later, I lost the next one. Then, again. I was sad to see the last leaf fall. But, such is the way of plants. You can’t save them all, right? I decided to move on, knowing that my healthy Alocasia had survived and was doing well.

During the first week of June, after all four leaves had died, I took the pot into the kitchen, with the idea of dumping it all in the trash. I flipped up the lid on our garbage can, and with one swift motion, the entire contents of the pot dropped. As the lid fell closed, I caught a glimpse of…something.

The plant had died. Two inches of shriveled stalk remained above the soil. But, remember that bulb that had no roots? Over a 3 week period of time, as I watched it fade, cutting off the dying leaves one-by-one, the bulb had thrived. It created a vast root system that was simply amazing. I quickly pulled it out of the trash. 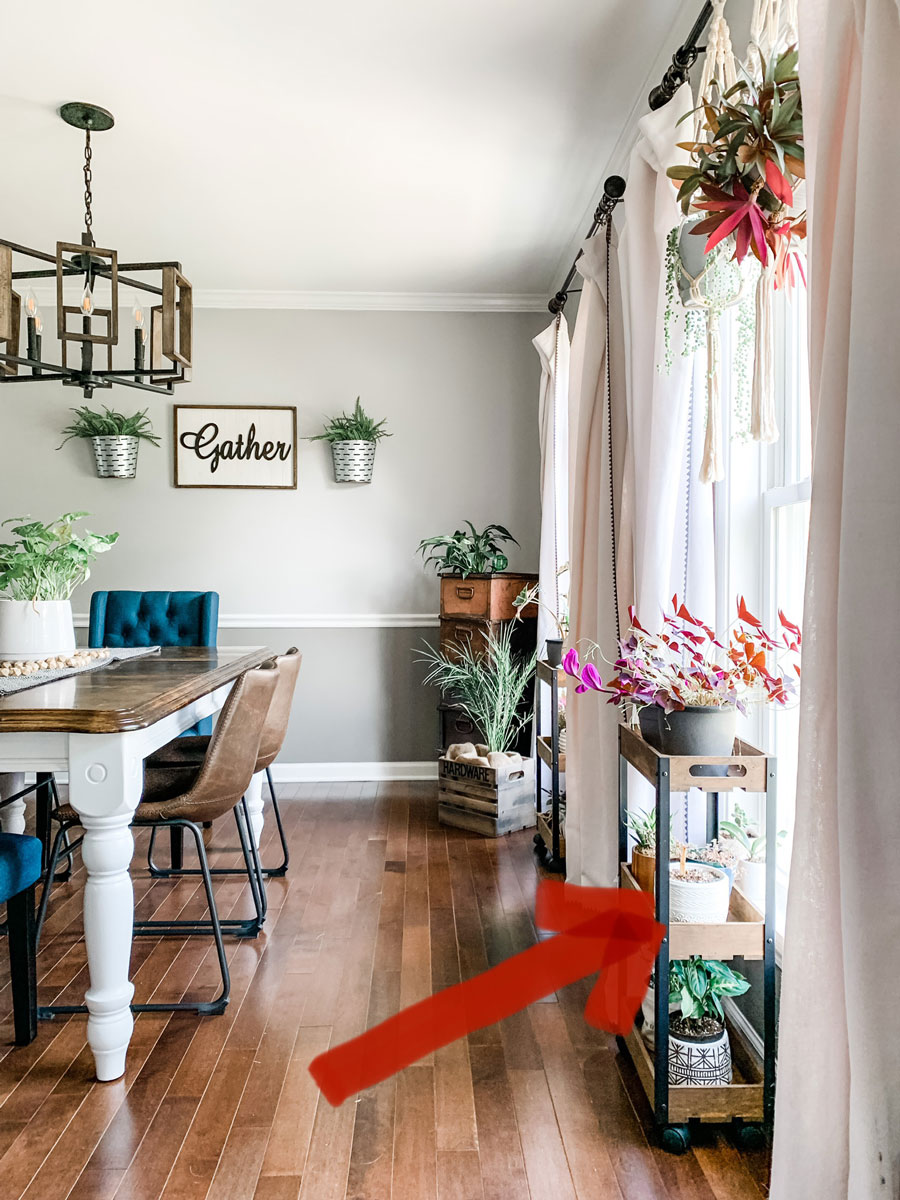 I put it back in the pot with adequate soil, and placed it on a shelf, watering it every week with the rest of my ‘once a week’ plants.

You know what they say about growth? It takes time. Sometimes, you have to trust what you can’t see. All you can do is plant an idea, a dream…or a bulb–and hope you did it right.

Waiting to see actual growth is often the hardest part. It’s not the planting. It’s waiting and wondering if you did it right. But, you know what else? No matter how hard it is to wait, bulbs will never show growth if you don’t plant them. 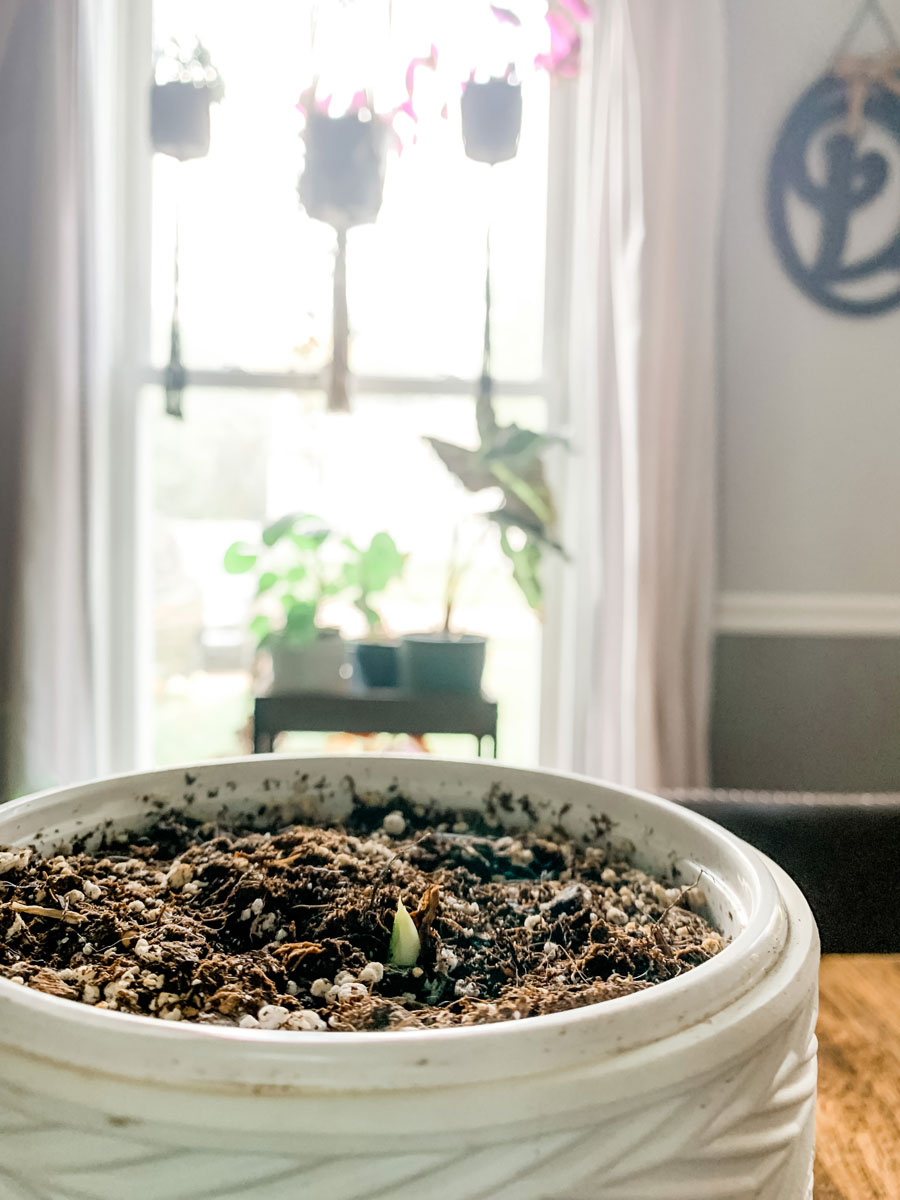 So, trust the process. Plant the bulbs. Start today. It may be slow, but with time, growth will show itself.

“Hope is a good thing, maybe the best of things, and no good thing ever dies.” ~ Shawshank Redemption

What have your plants taught you?

Revealing the Backyard Makeover! The Pantone Palette 2022 Is Here!

11 of the Easiest Plants

Window Location + Growing Plants: What You Need to Know