Black & white will always be such a classic combo. It speaks to all ages. So, when I was planning the makeover of my son’s room, I found myself drawn to different room combos of black & white. But, instead of just pairing the two colors, I wanted dimension. This is where the tribal wall stencil comes in.

I ordered from Cutting Edge Stencils because they are known for their quality, plus they do a ton of videos and give good tips. I wanted the project to be a success. And, they really do set you up for success! This “Mudcloth” tribal wall stencil is the one I chose. If you want to see videos and hear tips as I worked through this project, visit my Instagram page, where I have it saved as a story highlight.

This is what I needed to do this project. In addition to the tribal wall stencil, I also ordered this essentials kit they recommended, which includes a hanging level, stencil brush and foam roller with handle. The stencil comes with a great “recipe” of directions, printed and included in the shipping box. 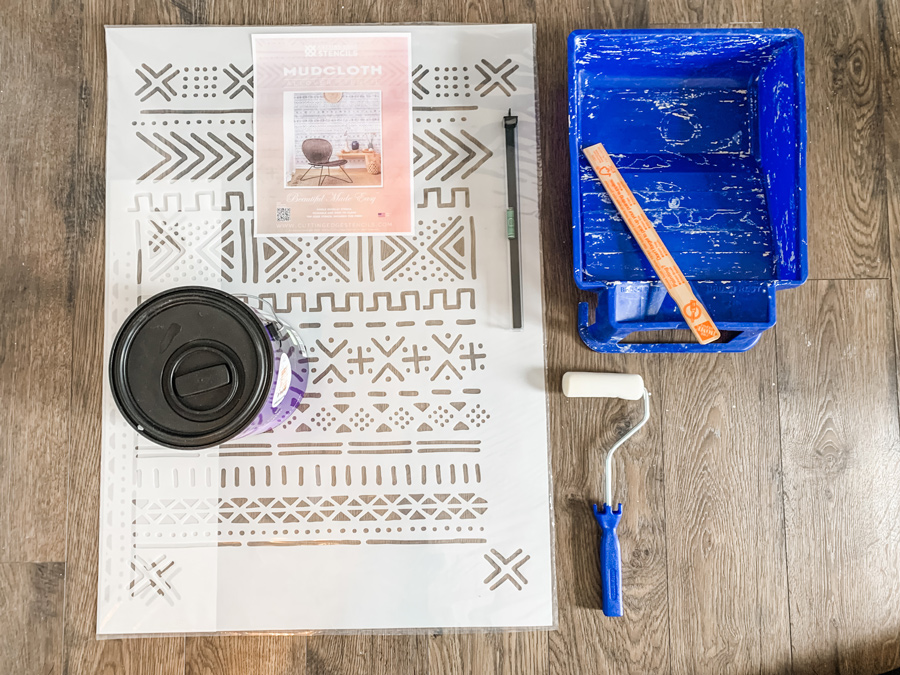 I’m using the wall paint that I will be continuing on with for the rest of his room project. It’s Raven Black from Behr. It’s an interior latex wall paint in an eggshell finish. They recommend applying the stencil on a clean wall, preferably with flat paint. Because I just recently painted the room, along with the ceiling, this was easy. To sum it up: Base Wall = flat paint, Stencil = eggshell finish.

It took me a few minutes to get it positioned. The hanging level is worth its weight in gold.

Edge tip: After the entire project is done, you can edge the ceiling to get the stencil all the way to the top. However, you have to know ahead of time how much room you need–which will require you to hang it temporarily as you position the full-size one. I didn’t do this…rookie mistake. There isn’t room for me to add it now, and while it looks great, that information would have been helpful beforehand. 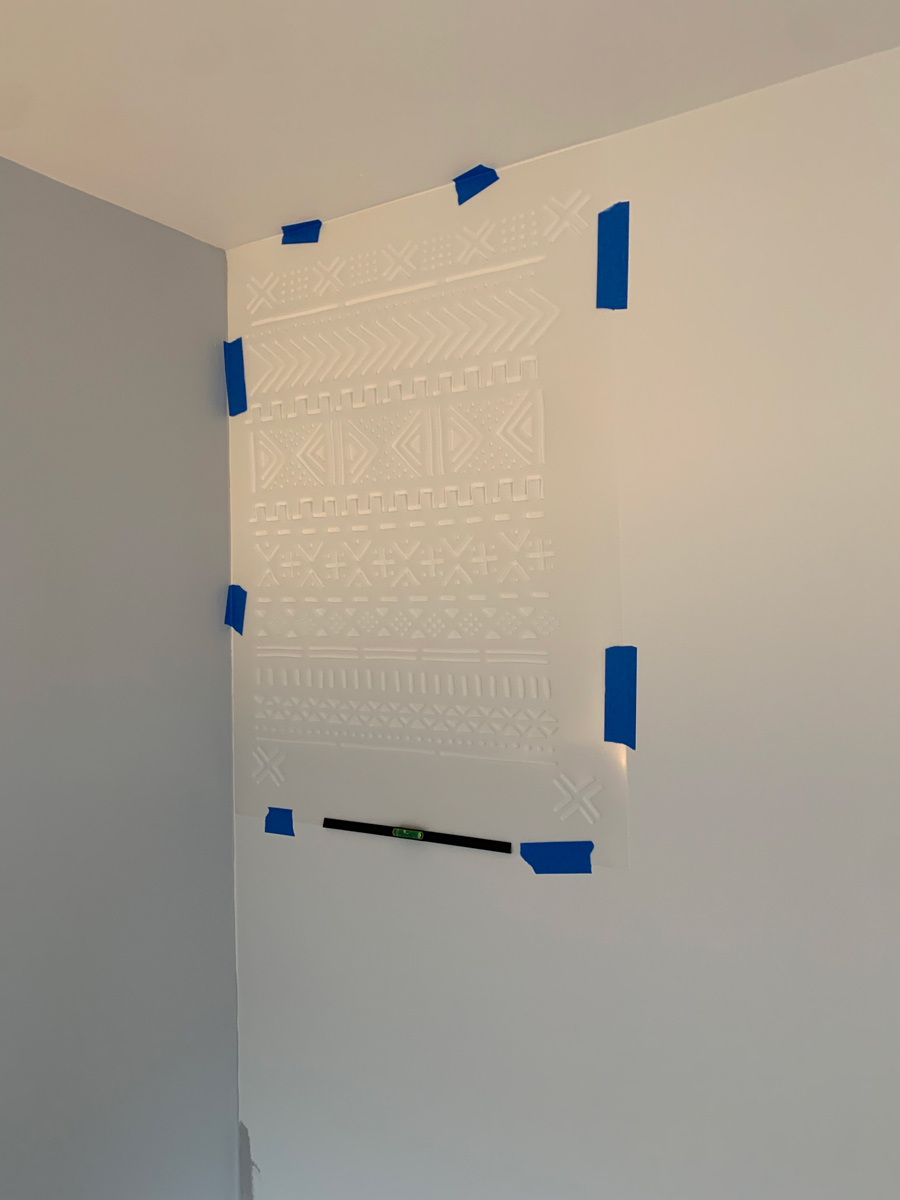 One tip they provide is to have a paper towel nearby to roll off excess paint. The last thing you’ll want is to have dripping paint. I did this when I felt like there was too much. It’s better to roll it multiple times, layering the paint, than to add too much all at once. 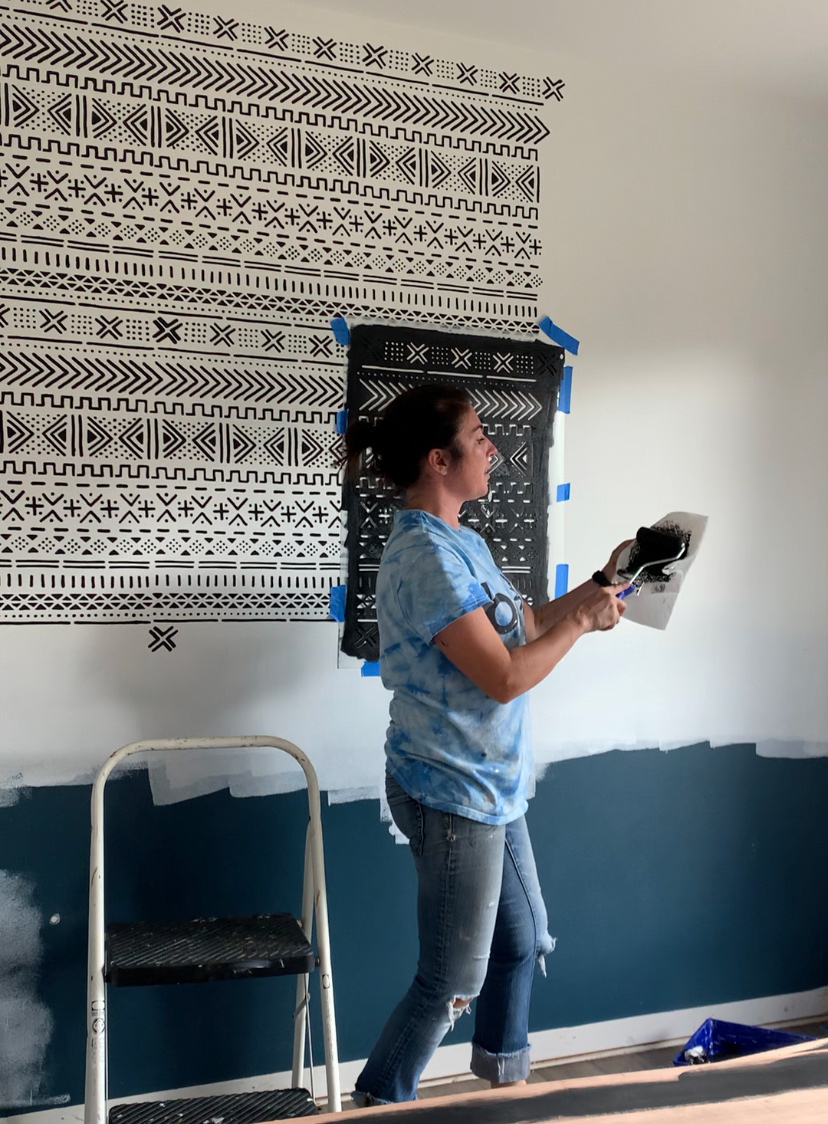 I found that rolling the top row first was helpful in transferring the pattern for realignment. By doing that first, the part that is being aligned is dry enough to not smudge. I also painted the corner “X” which would also be used to realign. After those portions were done, I rolled the rest of the stencil. 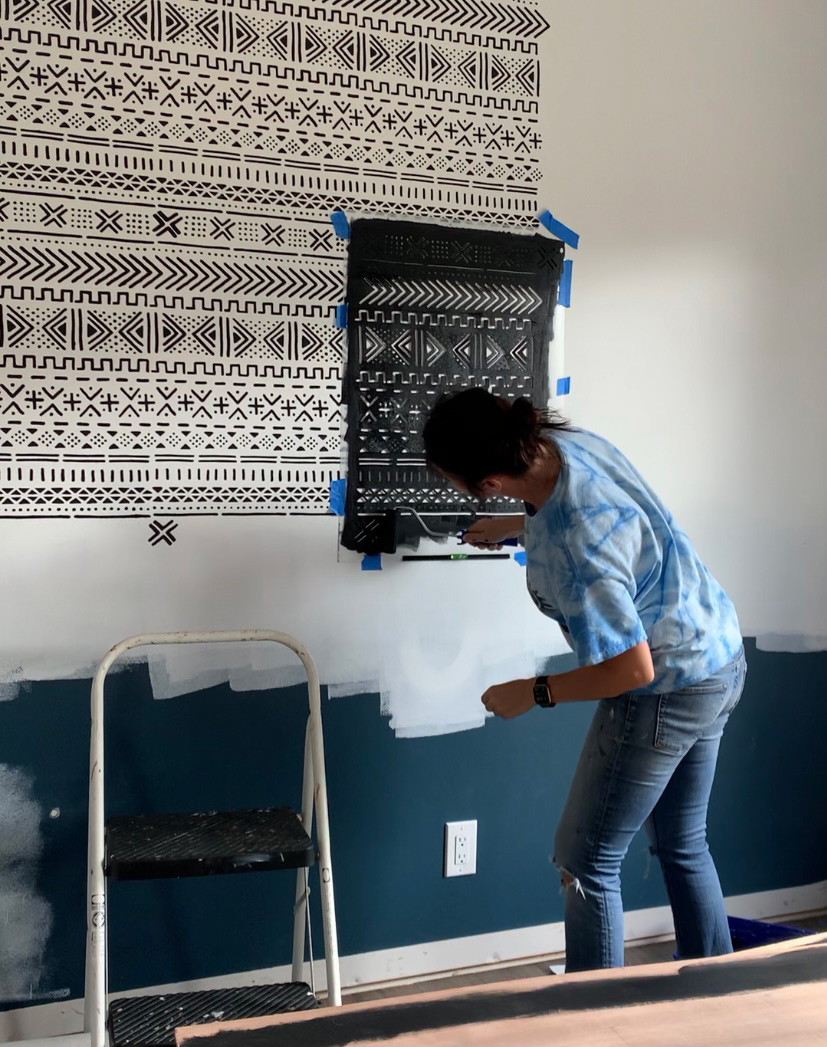 To remove the rolled stencil, I started in the top left corner and slowly pulled it away. This worked every time to keep from getting paint on anything. 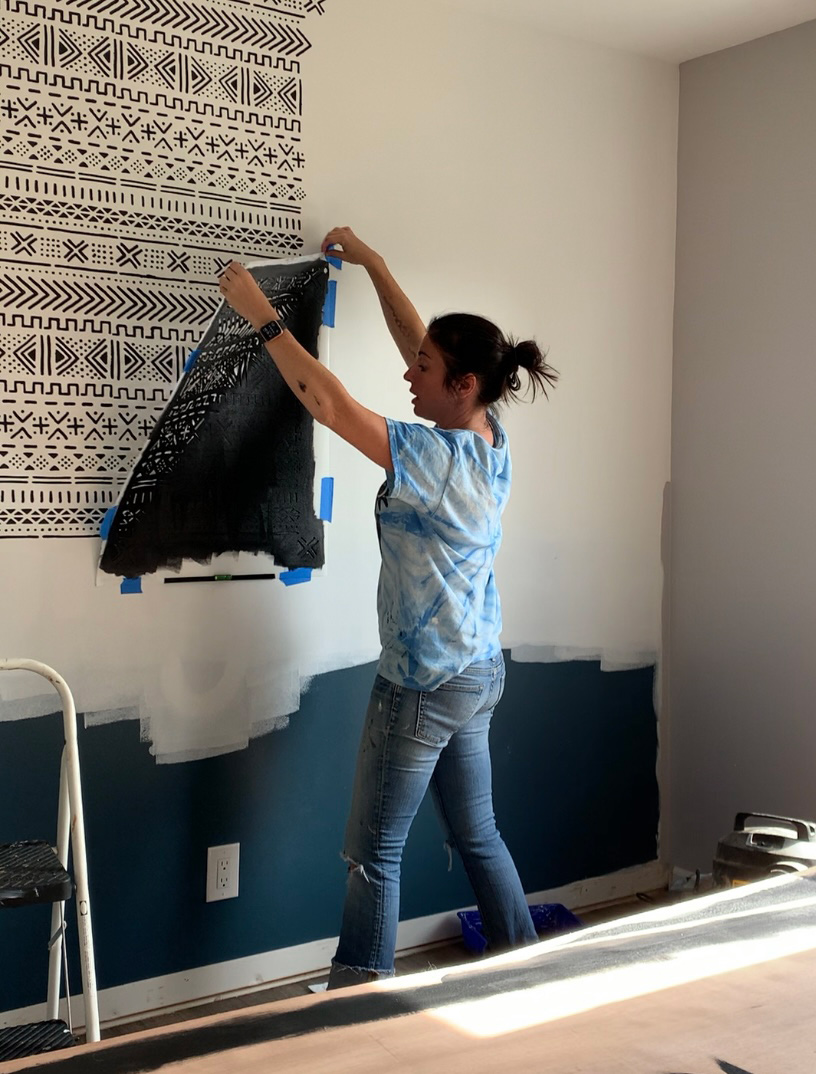 After removing it, I used the existing tape to put it off to the side for a couple minutes. I was lucky to be able to use the wall below the halfway mark, since the board and batten will be in place.

Stenciling the Corner of the Wall

I feel like there needs to be more information about stenciling the corner of the wall. I looked, and I couldn’t quickly find much about this topic specifically. But, for me, this was very intimidating, especially since as you get closer to the the corner, you realize there is no way you’ll fit the whole thing, and you start to panic. You’ve now spent half the day creating this beautiful wall art, and this could be the death of it. 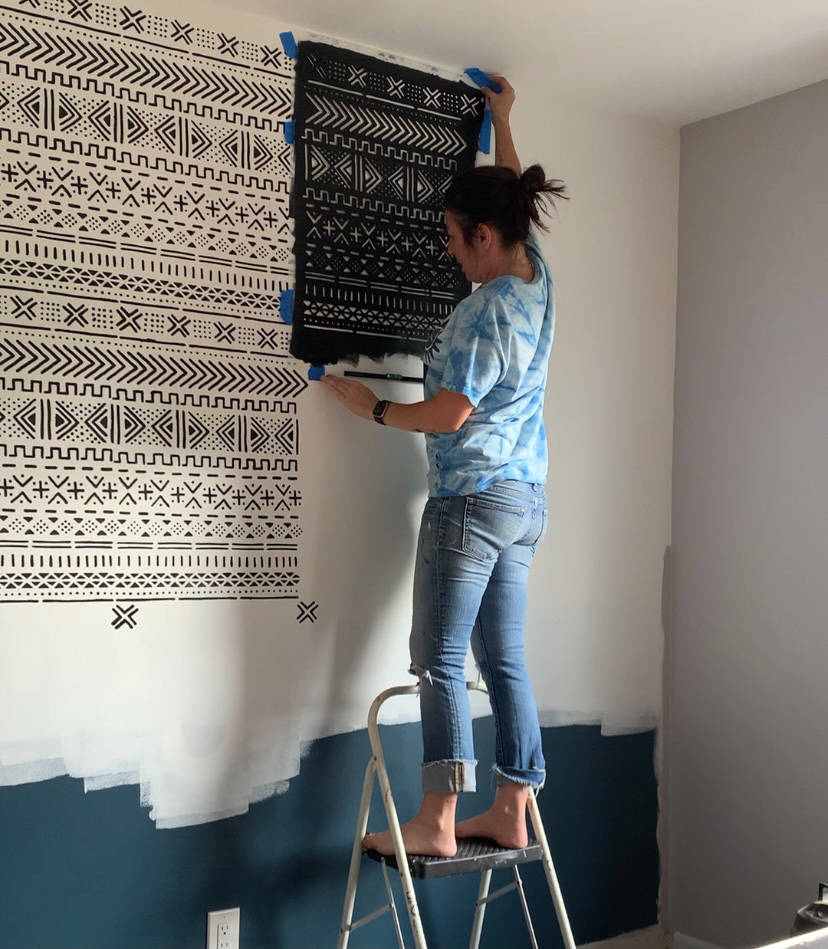 It’s easy. This is why they don’t offer much about stenciling the corner of the wall. Coincidentally, I had washed my stencil right before doing the corner, and I highly recommend it. It was like having a clean slate, and because I had left to wash the stencil, the wall was completely dry, so no smudging risk.

It takes time. It’s going to be the longest you’ll spend on the last column of your project. For me, after washing my stencil, I had dried it with a towel, but then left it out to dry while I prepped the corner. I taped a column of paper towels on the opposite wall to prevent any paint edges touching the wall with adjustments. Then, I used painter’s tape to cover the corner, just a single thickness. To create an edge that was a similar size edge as the beginning of the wall, I prepped the edge of the wall I was stenciling with a double row of tape.

The stencil is very flexible. When you go through the realignment of the stencil, you can use your hand to press the stencil into the corner before taping the other three sides up.

Follow the pattern. So, I know I said that I had added all that tape at the edge of the wall. I removed it. Because I was using the tribal wall stencil, the straight edge would not allow me to continue the pattern. So, I took off both of the edge pieces of tape–under the stencil–and then used smaller tape pieces to create the pattern I wanted to continue. I made sure to keep in mind how much of a “blank edge” I wanted. 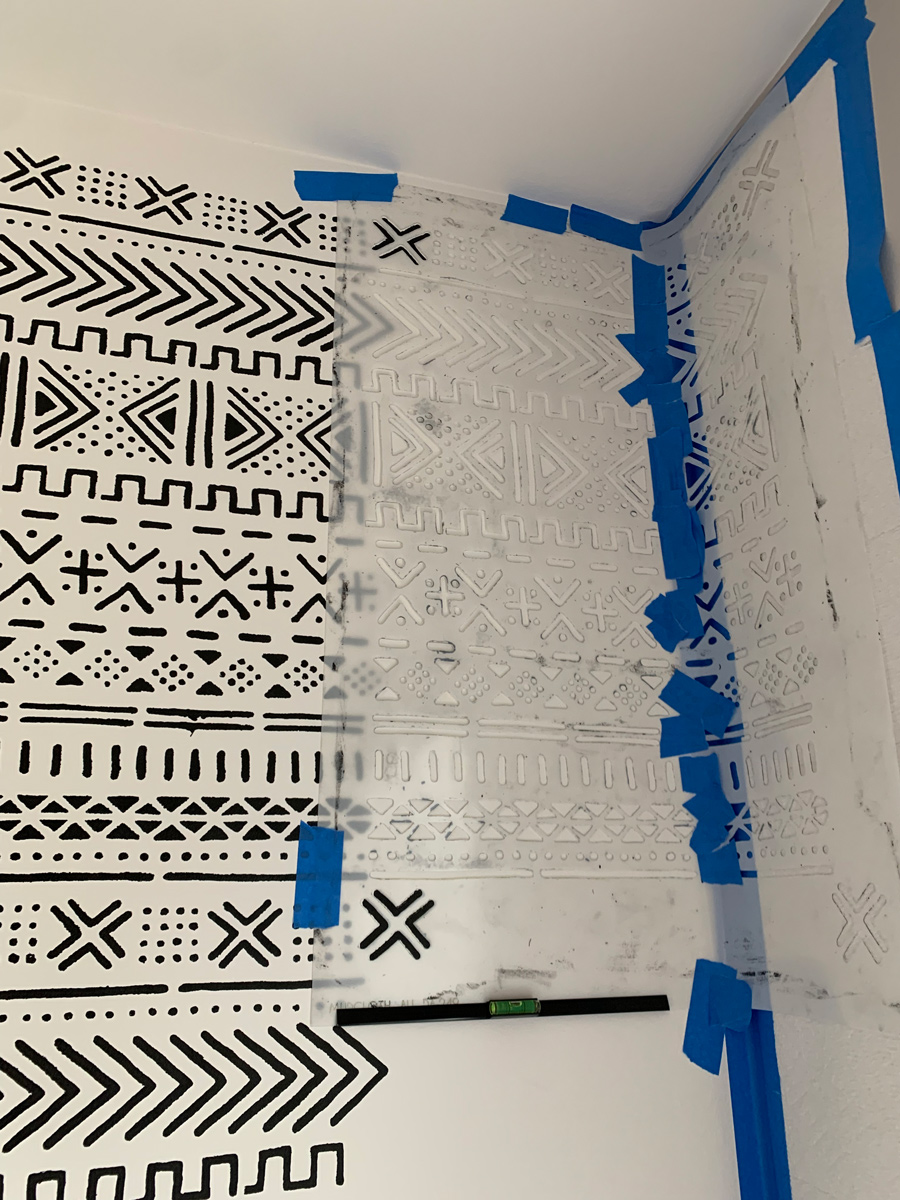 Depending on how much time your wall stenciling takes, you may start to notice little strings attached to your wall as you pull the stencil away. This is an indication that it’s time to wash the stencil. Don’t touch the strings while wet. They will dry easily within a couple of minutes, and you can pull them off with your fingers or tweezers.

Super easy. But, it’s pretty big. I have a huge sink in my kitchen with a granite finish, which has made washing black paint off of things a cinch. If you don’t have a sink large enough to wash it off, you could consider the tub. The stencil washes clean away with warm/hot water and some hand wiping. It was actually quite satisfying to watch the paint peel off as the water hit it.

How Long Does It Take to Stencil?

I did not *exactly* do this project straight through. My daughter was home, so I had to stop here and there to do things with her and for her, like making food, having lunch together, etc. I also was only doing a double layer across the wall (12 feet wide). I started at 10:00, getting supplies and reading through materials, painting started at 10:30, and the wall was done by 2:30. I would guess if I could have worked straight through, it would have taken about 3 hours.

This stencil project was the perfect accent for this black and white feature wall in my son’s room. When added with the board & batten on the bottom, it turned out beautifully!

Painting Over Blue Walls The Black Board & Batten Wall Feature

How to Make Photo Cube Ornaments