How to Build an Angled Board and Batten Wall

Let’s build an angled board and batten wall!
That’s what I found myself saying to friends of ours who asked me to help them design their nursery. In all honestly, I have been wanting to build one of these geometric board and batten walls for a while now. And, I’ve been eyeing up the wall in my office. But, the opportunity became reality when Brei & Matt chose this design for their nursery wall. Normally, I would be more than happy to go and help. But, they live about 500 miles away. And, Matt is pretty handy. So, I did it right before he was planning to do it so I could offer advice, tips & tricks.

I am BIG on finding inspiring photos and ideas for my home. I also like to create it–some version of it–to help with the visualization in my own space. So many of my projects start this way…I drew the Corner Slat Wall, I used adding machine tape for the Honeycomb Shelves, I used painter’s tape for the Fireplace Build. For this project, I went with painter’s tape again to create an idea of where the battens would be. 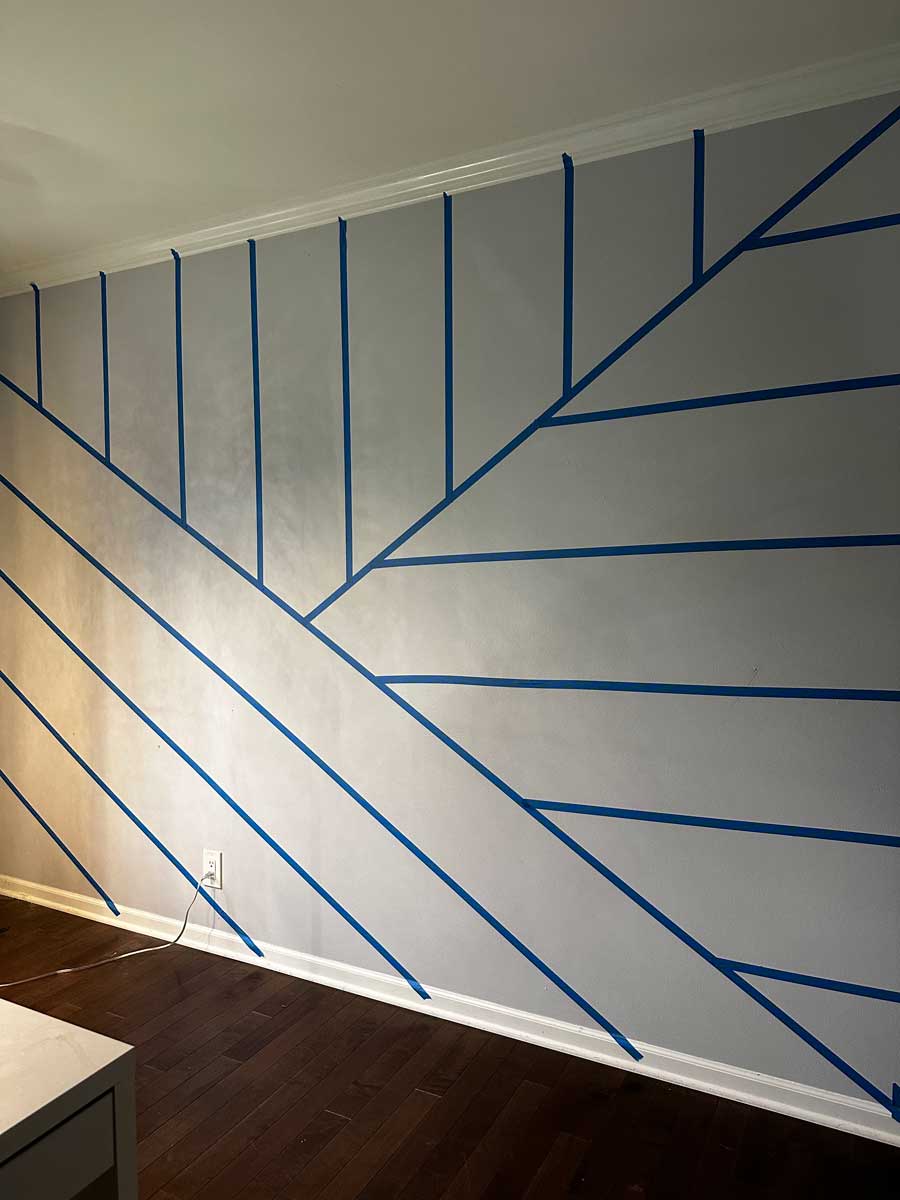 The benefit of taping up the design is that you can get a general idea of spacing between boards and the length of the boards.

When you are building anything, measuring happens close to the beginning of the process. For this project, as mentioned, taping up the design first is helpful when measuring. I measured the height and width of the edges for the border, considering that–for this project–I would be leaving the baseboard & trim in place. What I usually do is cut the baseboard–see more in this black board & batten project. 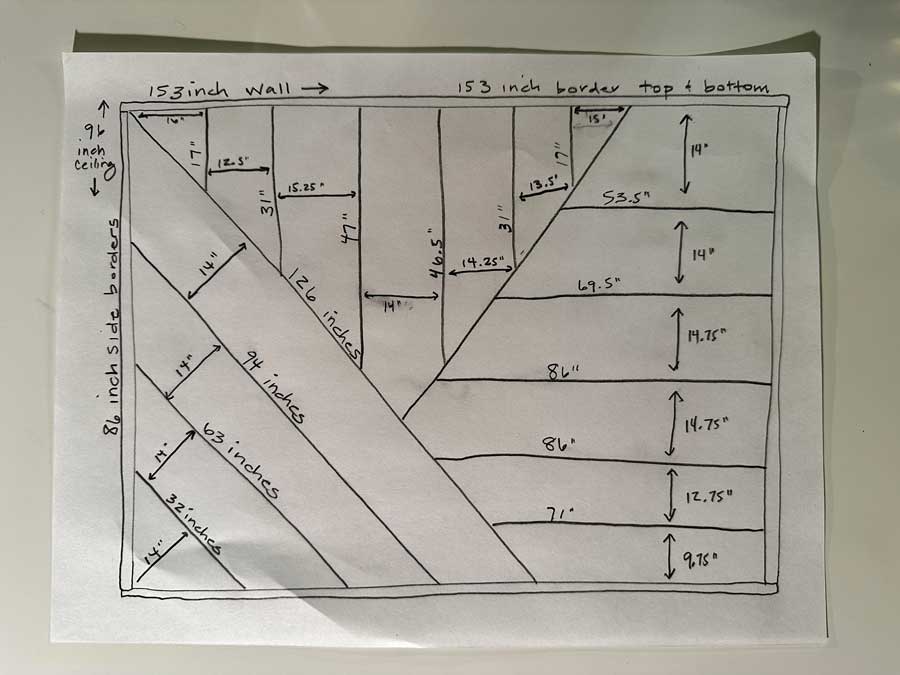 My wall width was 153 inches, with a height of 96 inches. You can see a lot of details in the drawing I did after the project was completed. Even though the height was 96, the border ended up only being 86 inches high because I subtracted the baseboard and crown moulding, plus top and bottom boarder pieces.

I only bought the “battens” for this angled board and batten wall. For other projects, I added thin plywood for the backing boards, but I have learned that doing that is really best when you have textured walls or wall damage that you’d like to cover instead of patch, or if previous patching was done poorly.
Battens: (10) 12 foot lengths of primed MDF, size 1×2 (I used this for the bottom & side borders, too)
Top Border: (1) 12 foot length of Shoe, “Shingle Moulding” primed MDF + (1) 8 foot length (my wall is more than 12′)
Nails: 1.25″ finishing nails for the nail gun
Painter’s Tape (Optional–for taping out the design ahead of time + caulking if you choose)

Why Use Primed MDF?

I have used 1×2 pine wood boards for other walls I have done. But, it can get pretty pricey, and I wanted to attempt a more budget-friendly way of doing this.
Best. Decision. Ever.
My attempt at being frugal ended up being a genius way of putting up these walls. For one thing, you have to flip the boards over, using the back as the battens you see. The primed front is nailed up against the wall, with the *slightly* rounded edges flat against the wall. Why is this genius? Because those rounded edges allow you to get into the crevice between the wall and the battens with paint. Plus, it gives the illusion that there is no gap–that means you shouldn’t have to caulk. A huge win that removes a ton of time from the project.

Step 4: Put Up the Border

Leaving the crown moulding and baseboard in place was a new concept for me. For the crown, I bought a slim, decorative piece, hoping to join the crown to a plain border piece. 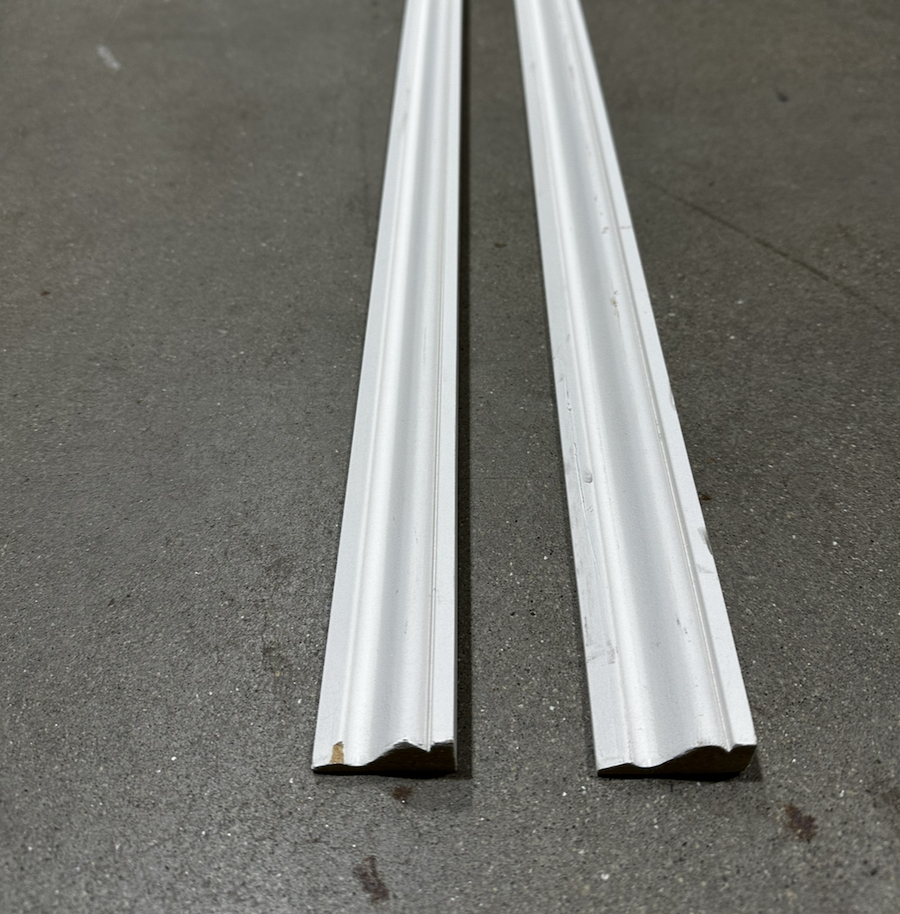 The idea was to use the contoured shoe up against the bottom of the crown, with the larger flat edge joined to a plain border piece. 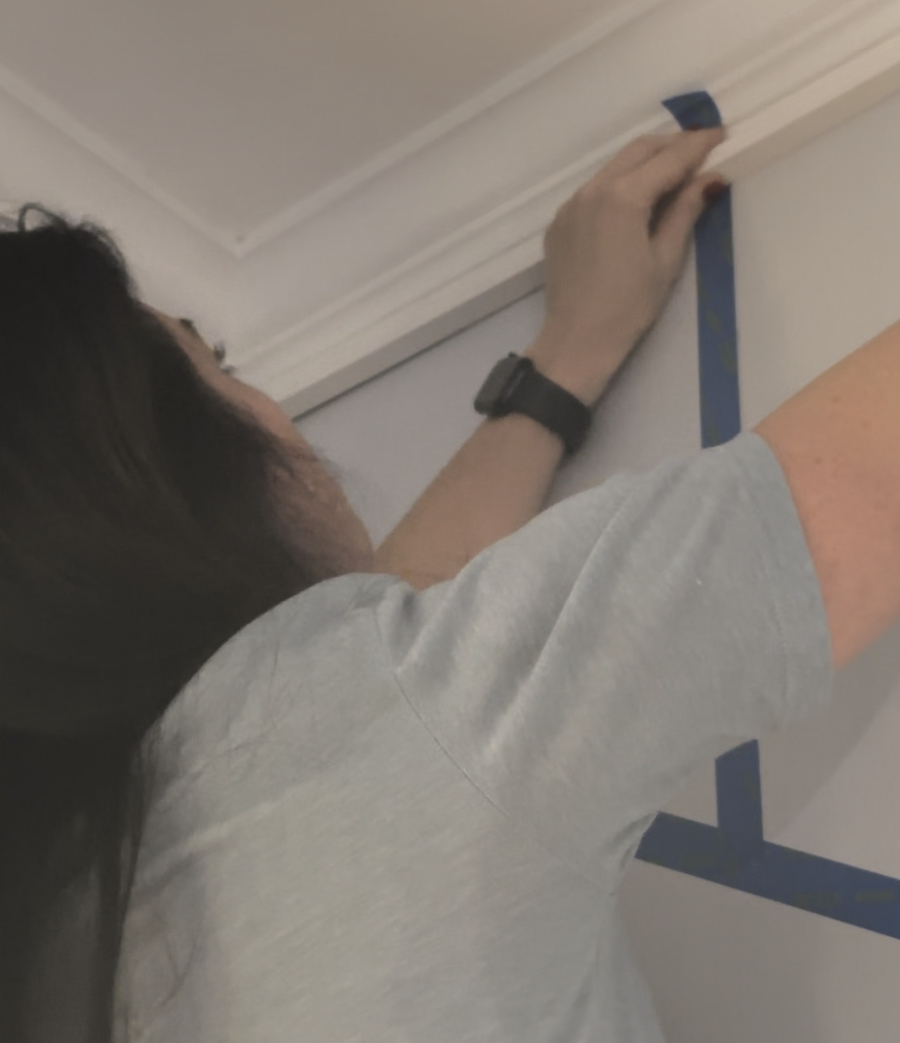 After holding it in place, it seemed a little too ornamental. But, I noticed that the very bottom of the crown was a “cove” piece of shoe. So, I flipped that contoured shoe over, and it perfectly fit over top of the cove. 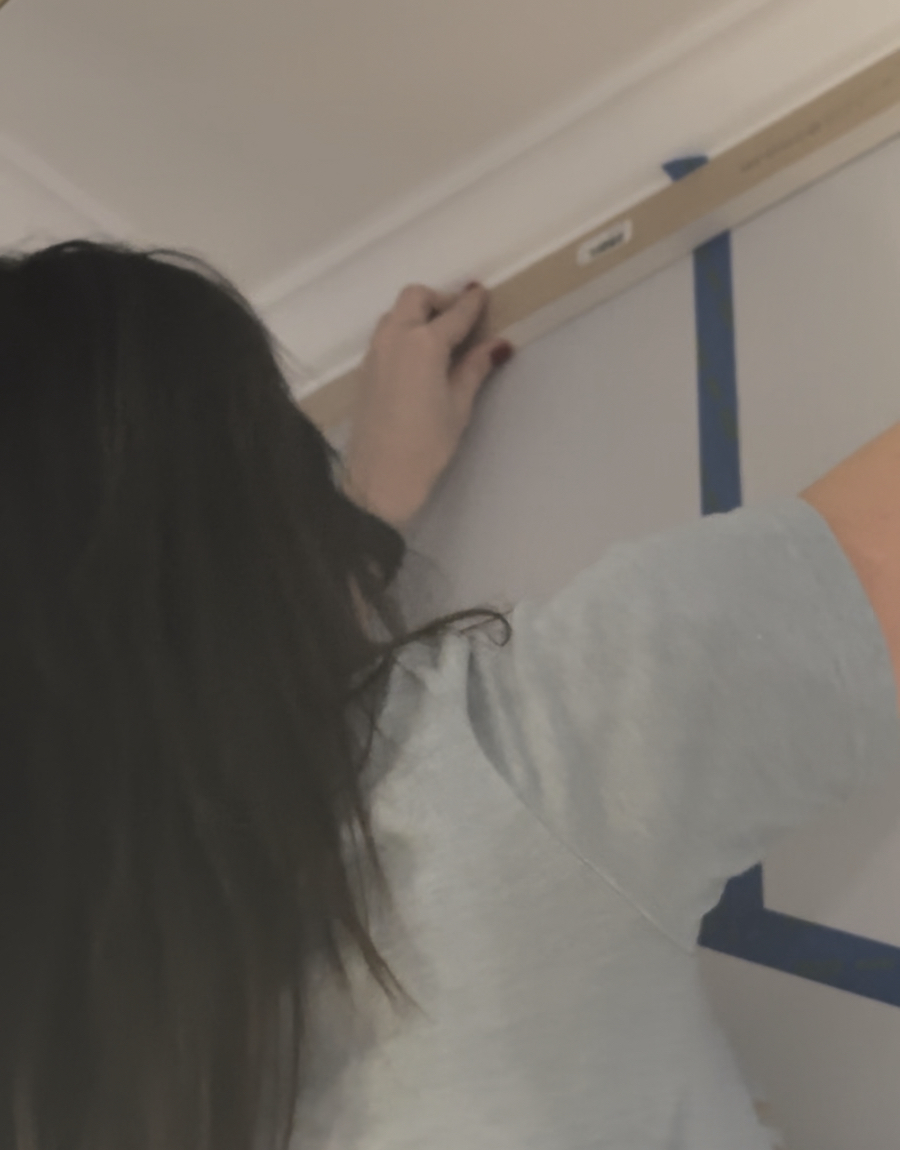 The only tricky part to adding a border to crown moulding is the corner edges. I held up the shoe and used a pencil to create a similar opposing shape, and then used my jig to do the cuts. It doesn’t have to be perfect, or pretty. Since the bottom edge is rounded, I just cut a rounded shape that has a straight cut for the lip, and I lightly sanded it. Once you add the side border piece, it looks finished, and with paint, it looks even better. 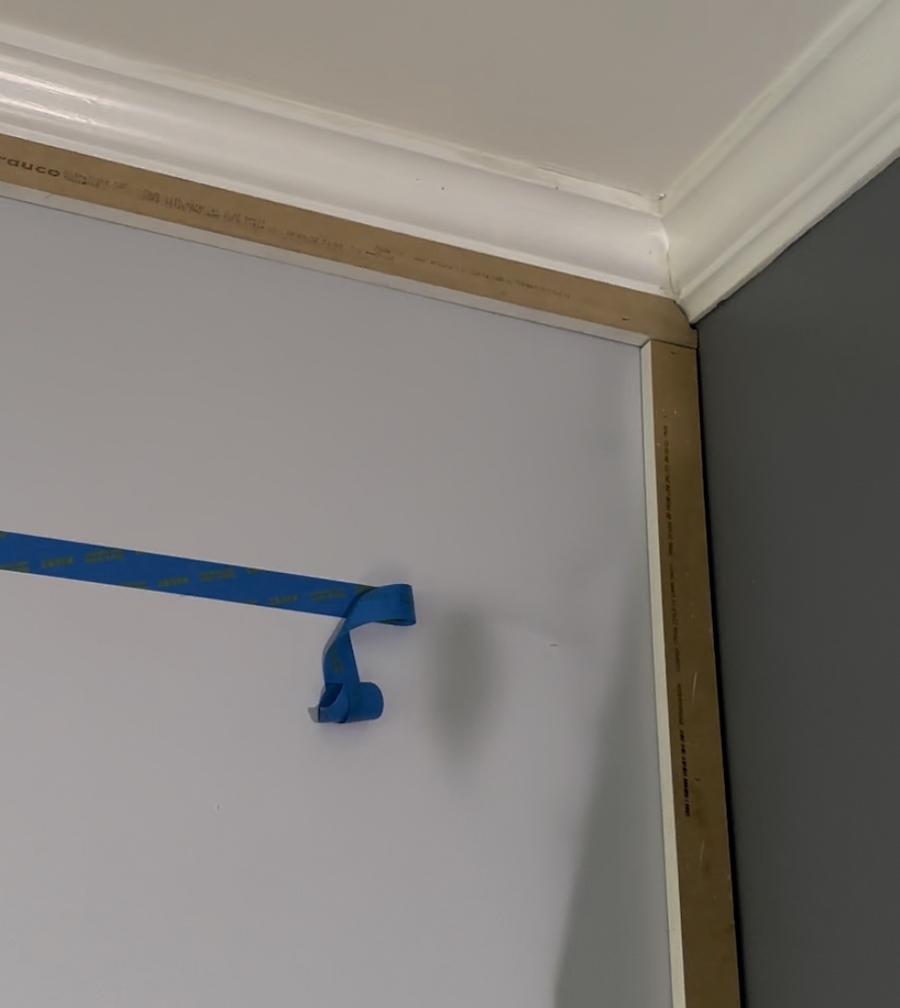 You can see the side border piece above. I placed the primed MDF just like I planned to place the battens, with the primed front flat against the wall and nailed in place after checking level, which you have to do for every part of the border. For the bottom baseboard, I tried the contoured shoe, and I didn’t like it. So, I held the primed MDF up with the primed edge against the wall, and also with it facing out. I liked the softness that the rounded edge of the primed side gave, so that’s how I created the bottom edge. 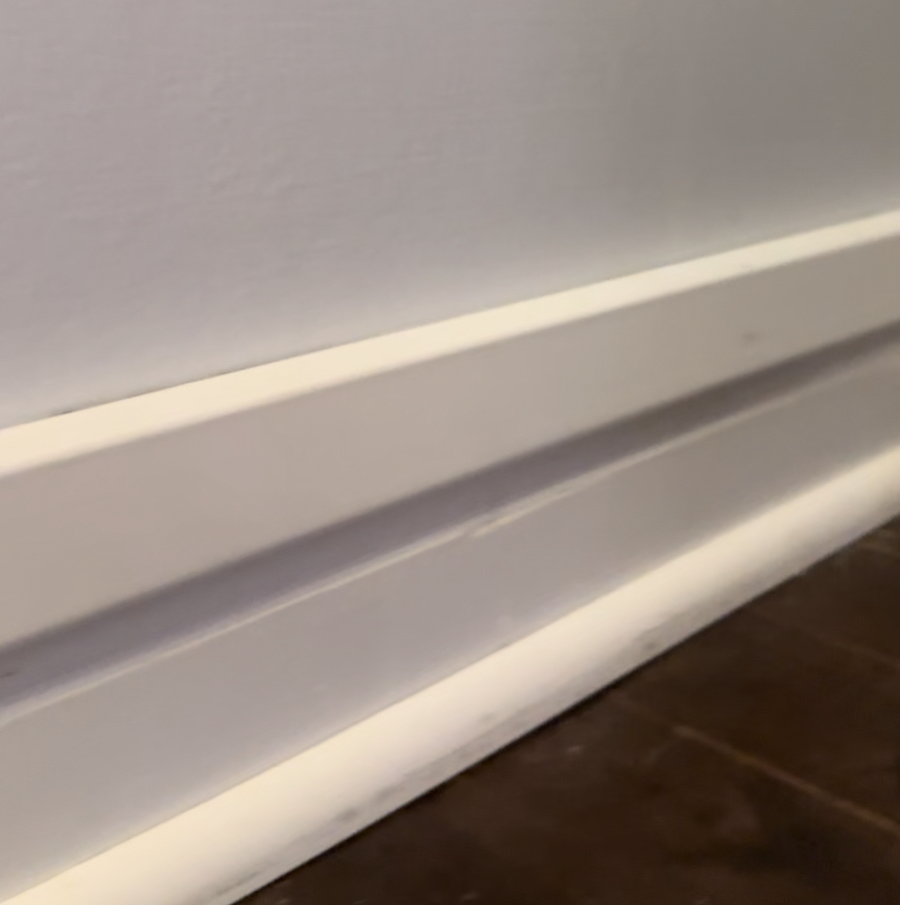 The longest cut is going to be that large, middle angled board. That will start your pattern and set up every other section. Your cuts are going to be 45º angles. If they don’t seem perfect, you can try up to 46.5º cuts to see what works best. But, don’t stress. I made some cuts where I gave up on perfection, and honestly, you can’t tell. If anything, you can use some wood fill to even it out. 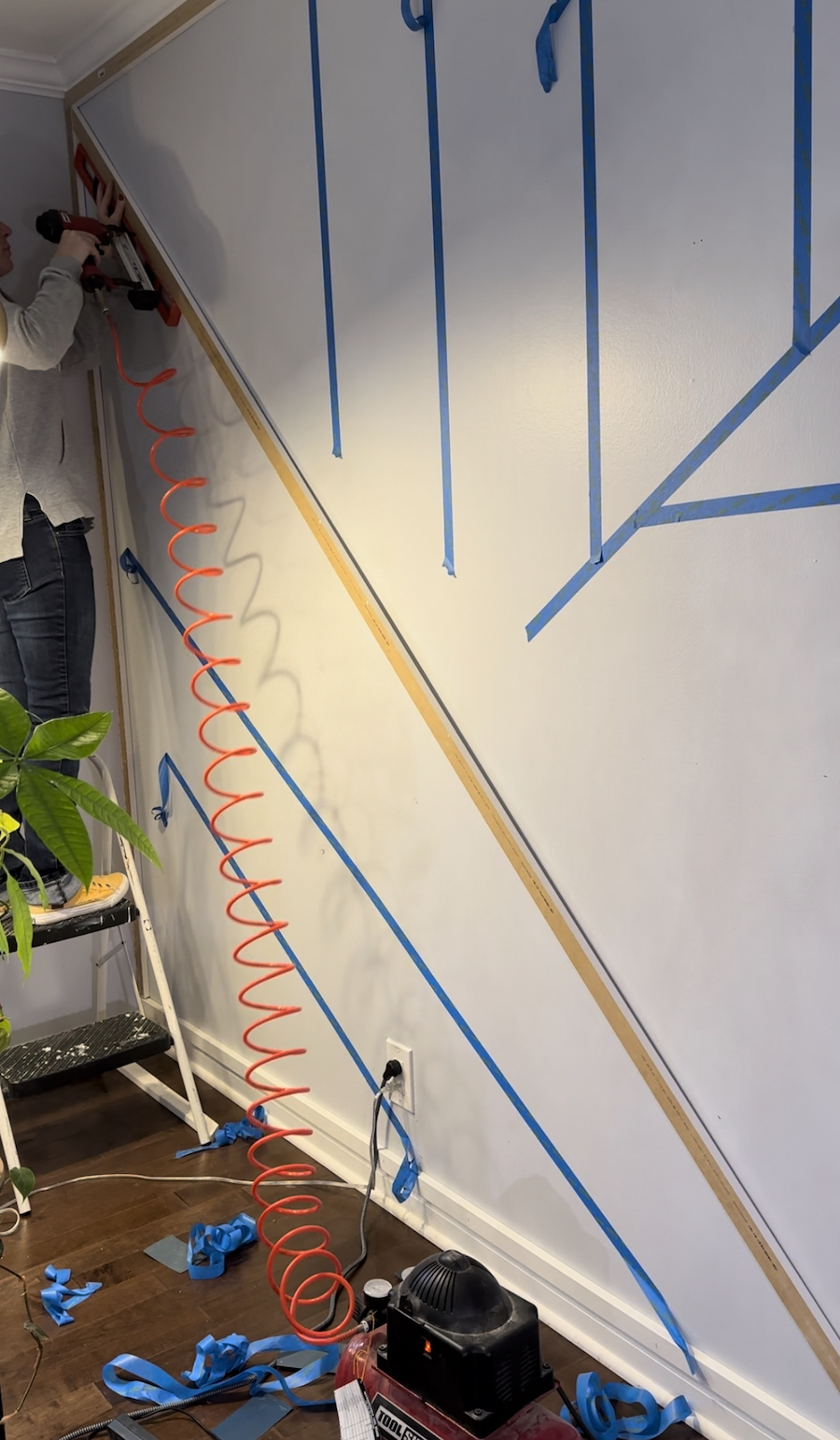 I used my level as I nailed this board in place–like a straight edge, just to ensure that the MDF wasn’t bowing at all. It’s kind of flexible, and this keeps it straight in place.

Step 6: Set Up the Distance Between Boards

Once you decide on the distance you’d like between boards, it’s a good idea to cut a “placer” block so you don’t have to measure each time. This made placing the boards a lot easier. But, I’ll let you in on a little secret…it’s totally flexible with an angled board and batten wall. 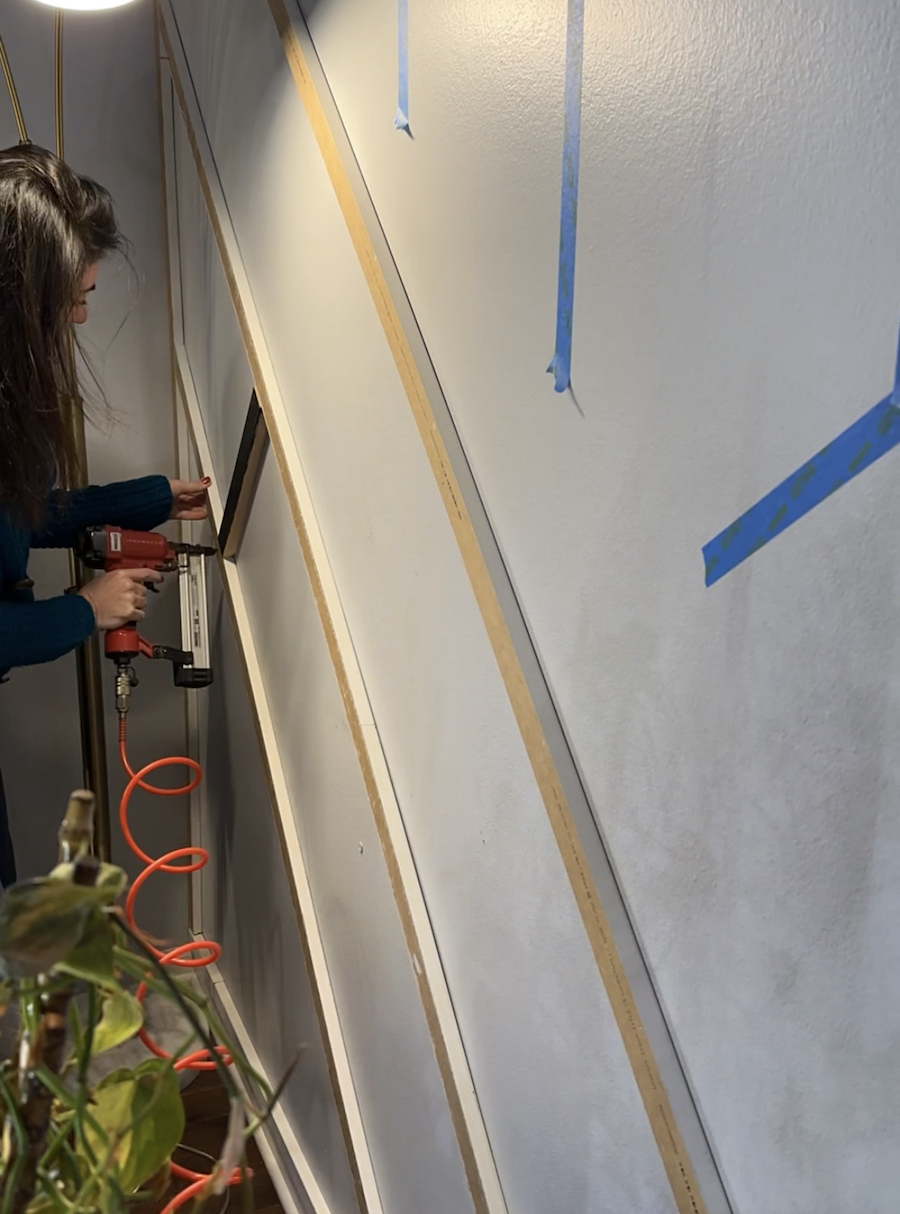 If you were doing a grid wall, you’d have to be strict about the spacing. But, a geometric wall? Varying spaces won’t draw the eye. I became a lot more relaxed about the spacing as the project went–as you can see in the drawing I added above. It’s more important that they are similarly spaced in their “grouping” of boards, adequately spaced so you don’t end up with a really narrow one on the edge of the group.

Step 7: Create the Other Sections

With this angled board and batten wall, once you finish the longest angle and the boards in that grouping, it’s time to move on to the next section. I cut the angled board that would separate the other sections next. You can try a 45º angle against the top border–I ended up doing 46.5º on mine. The edge against the middle angled board is flat. Once the top angle fit nicely, I marked and cut that flat side. 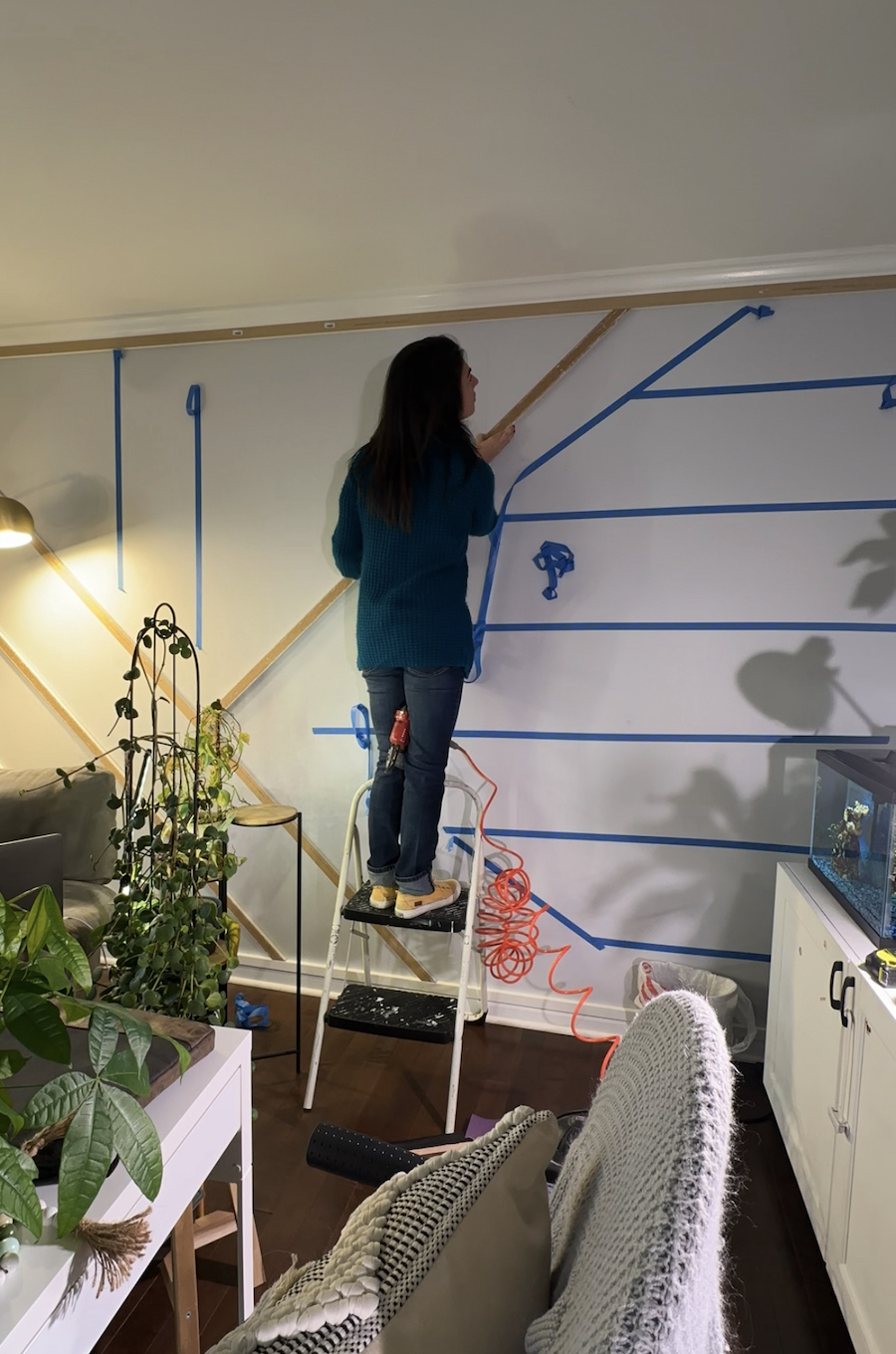 As you can see, I left the “inspiration” tape up as I worked so I would have a general idea of which way everything was going.

Step 8: Cut the Groupings of Boards

The boards in each section can be cut and installed after measuring the middle and marking. I started with the “V” in the side and top sections. I marked center with the level, and then measured about 7″ to each side. 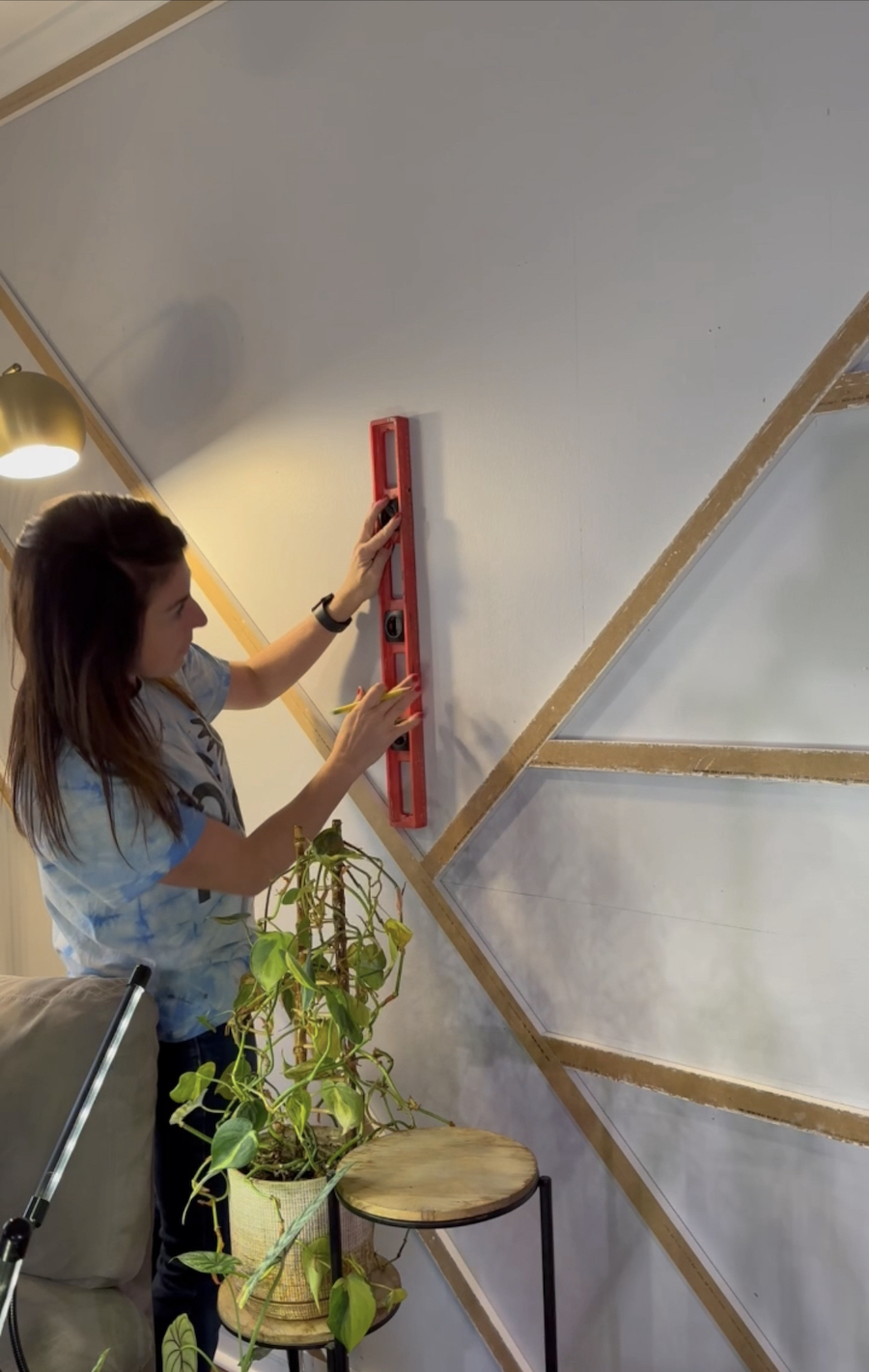 This starts the boards off with a 14″ spacing. Mark where the boards will go with a pencil, or small pieces of painter’s tape, to see what distance might work best. Use the original placer board to quickly mark and check how it all finishes out at the edge, or top and bottom, depending on which group you’re doing. Whatever size you choose, keep in mind that you’ll want to be able to easily fit a paint roller when you get to that step. 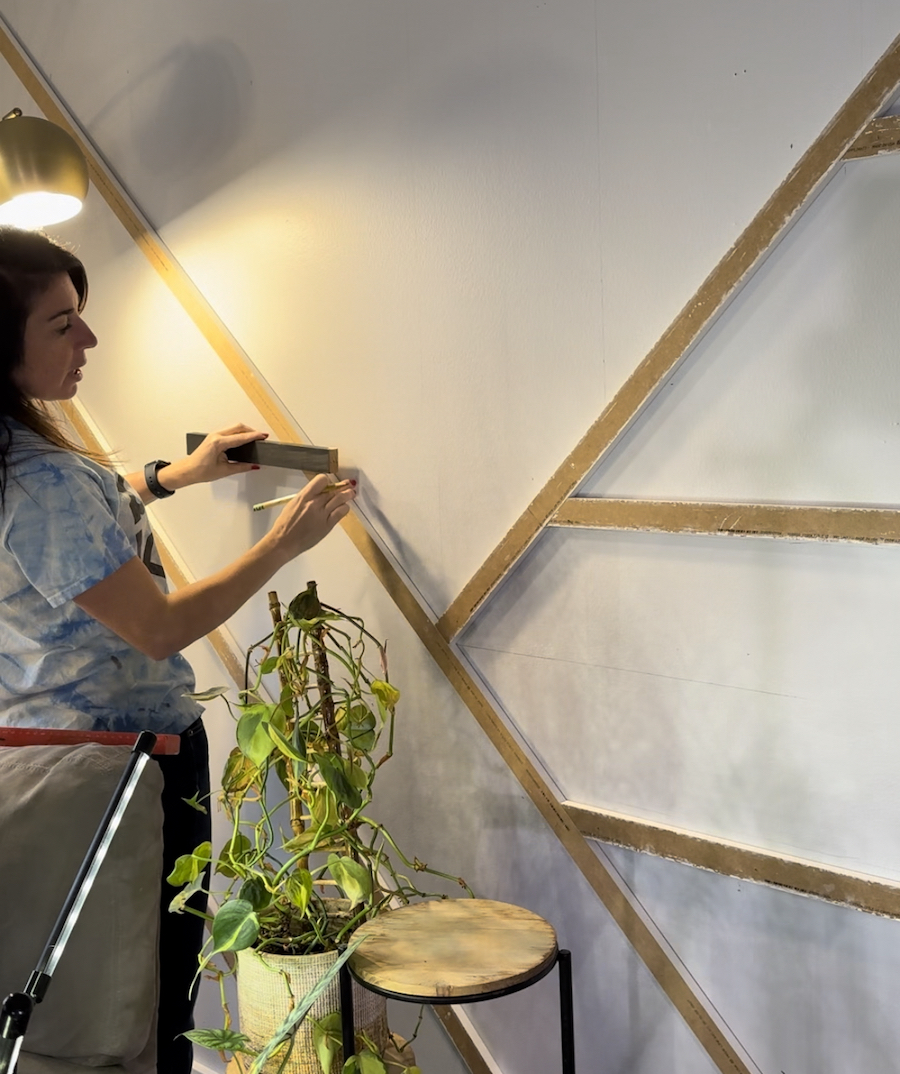 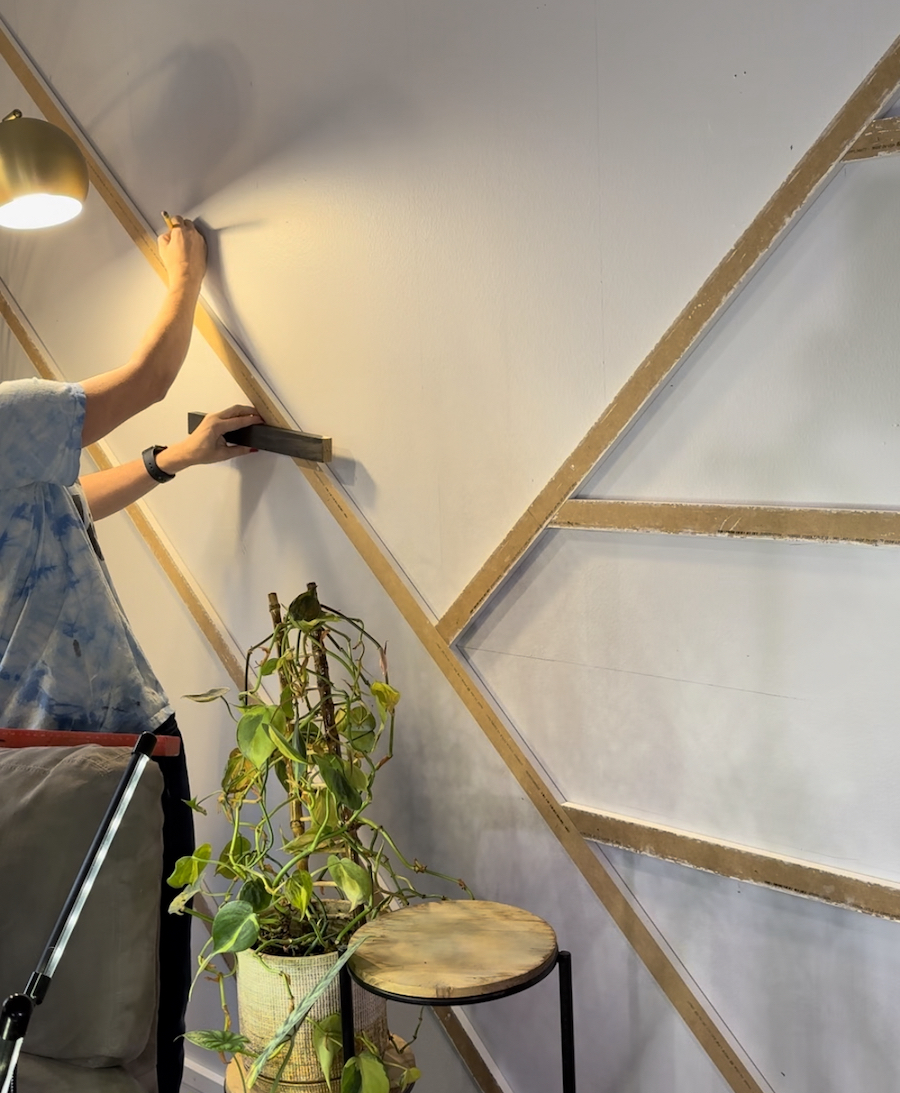 Once you have it marked, and you’ve made adjustments to the amount of spacing you need for that particular section, you can start cutting the pieces. The boards on each side of the “middle” should be very similar sizes. But, if you’re using MDF, the angles will be opposite, so be careful with those cuts. The cuts in these top and side groupings will have one angle and one straight-edge. 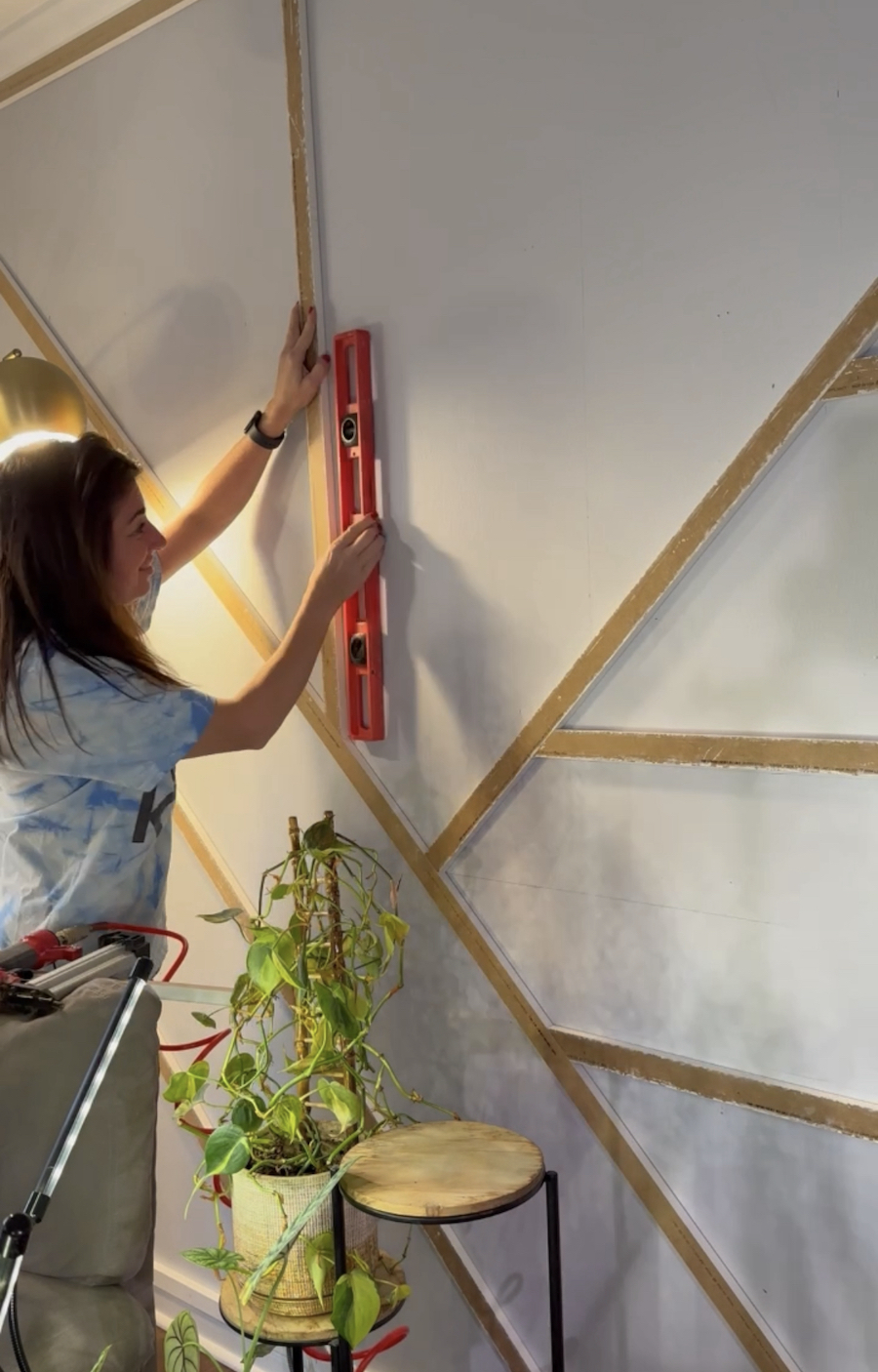 You’ll use the level to install the boards in place.

I’ll admit, I thought I would need to caulk. I actually DID caulk some of the boards. And, as I was looking at the partially finished wall, I realized that due to the rounded edge up against the wall, I probably wouldn’t notice. So, I can show you how I did the caulked seams, but you may want to edge the wall a bit with your paint first and step back to determine if you need to caulk it or not. 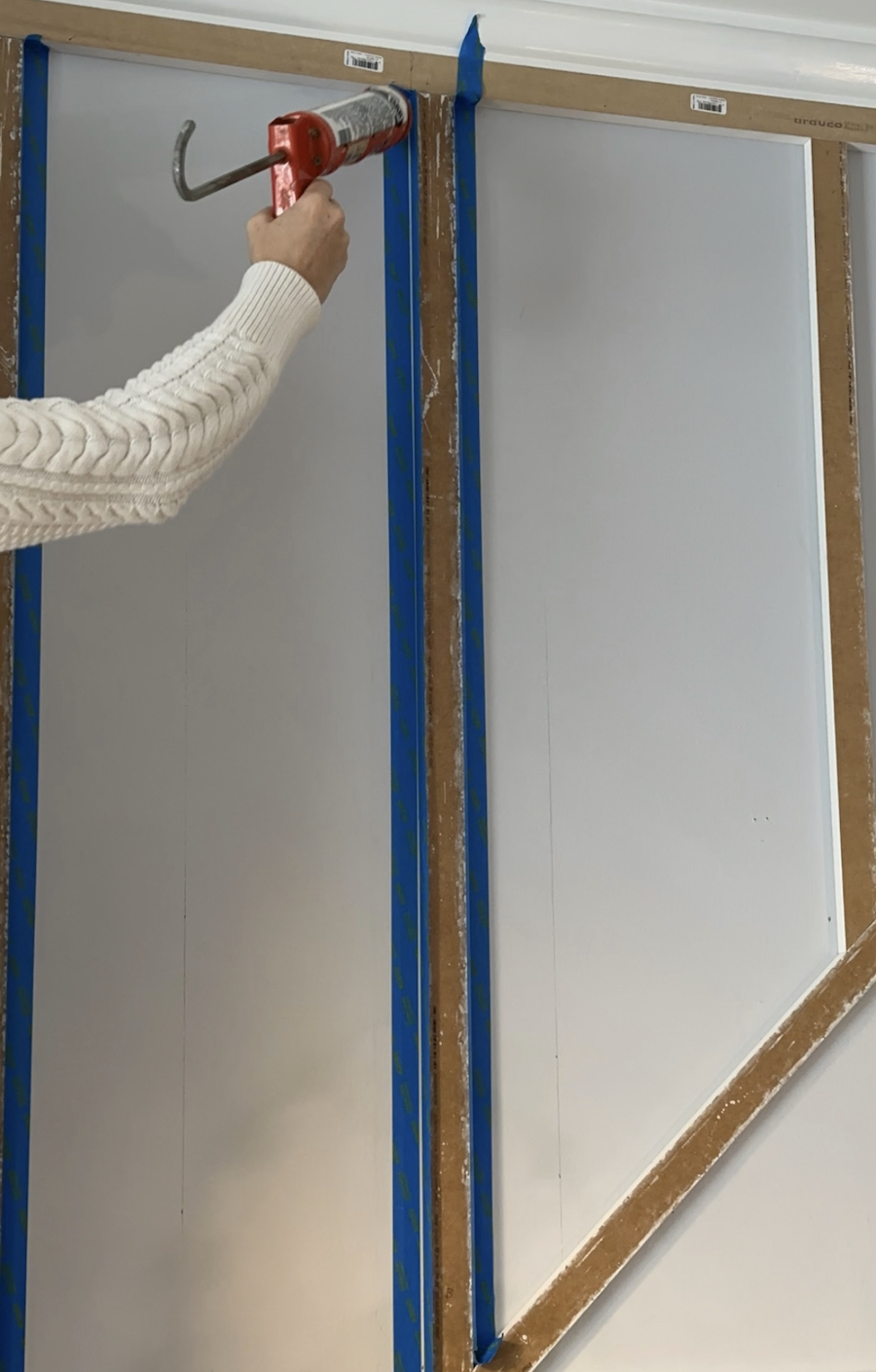 Place painter’s tape along the edges of each side of where the battens meet the wall. Run a line of caulk, using your finger to smooth it down, with no bubbles. Leave it for a few minutes, and then peel the tape off. It can finish drying without the tape in place.

If you haven’t yet decided on a color, get to the store and grab some swatches to tape up. I always like to grab colors at the start of the project so they can live in the space for a couple days. I have to check them out all day long to decide how the light interacts with them. 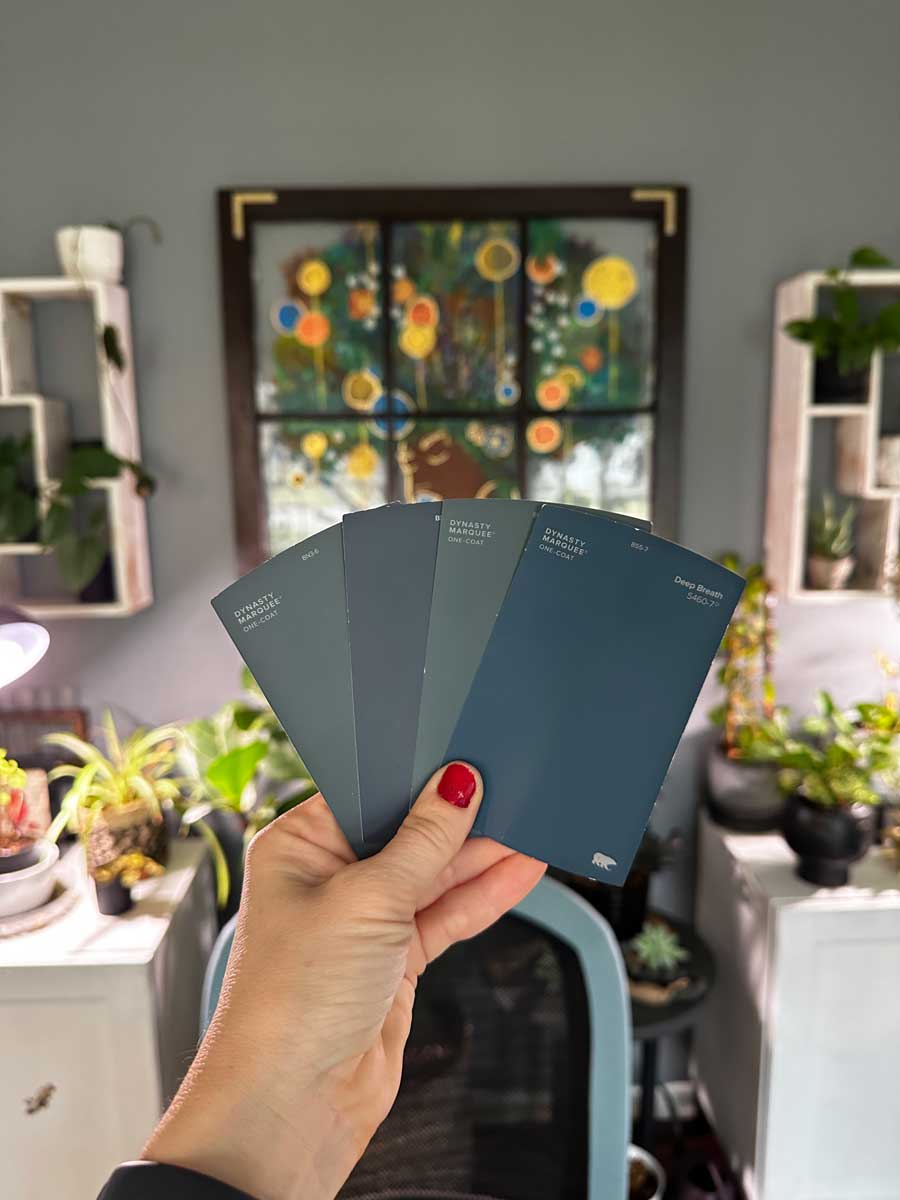 I chose Deep Breath from Behr. 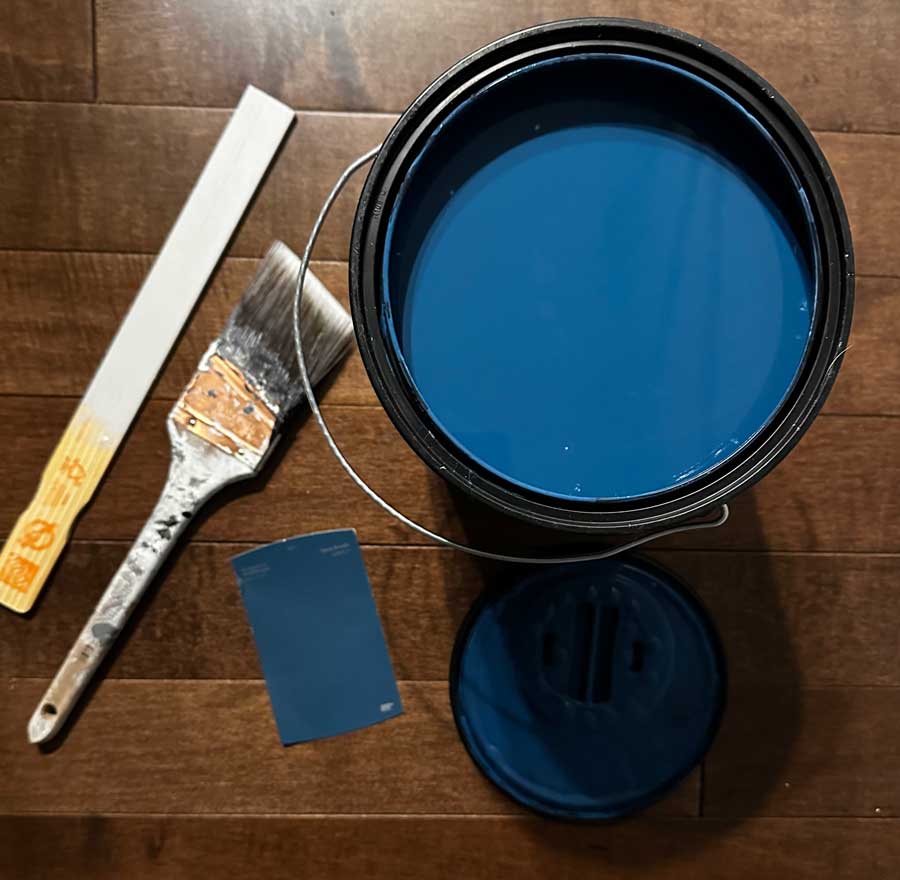 Start by edging the wall. 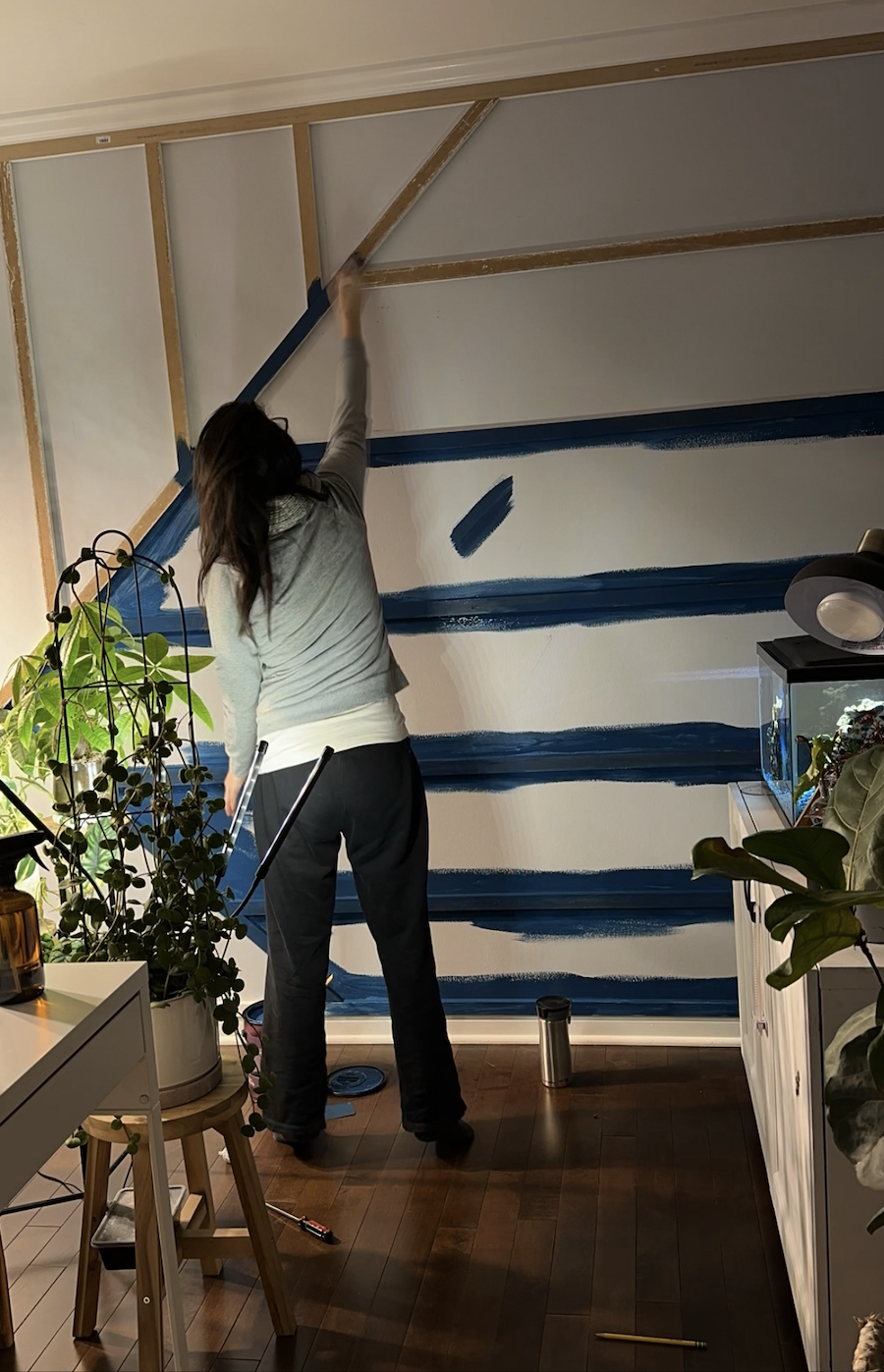 Then, roll between the battens. 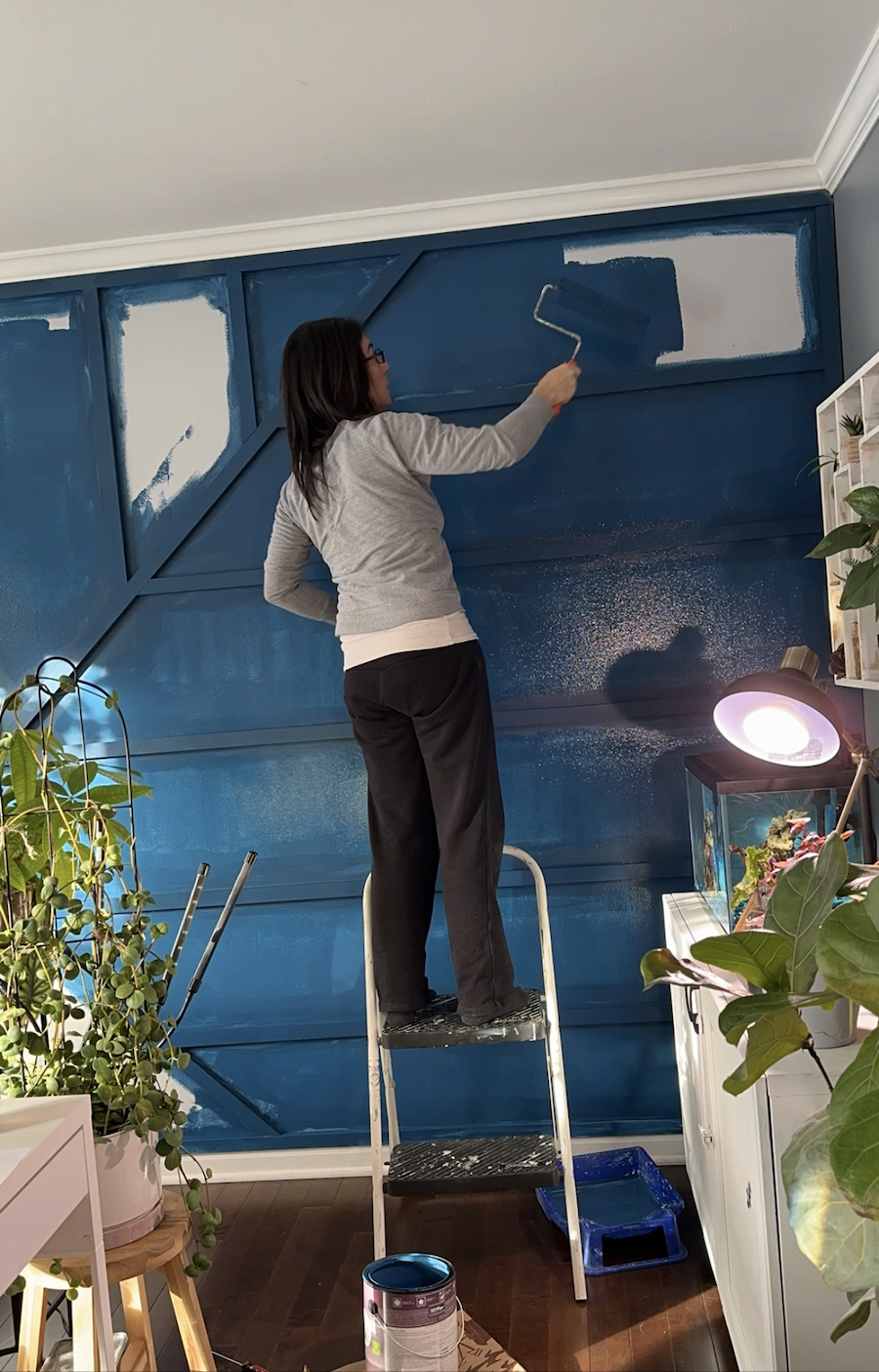 In the end, I did two coats–in some spots, with the edging, I went over it a third time.

Meet My Angled Board and Batten Wall!

What do you think? I am in love! 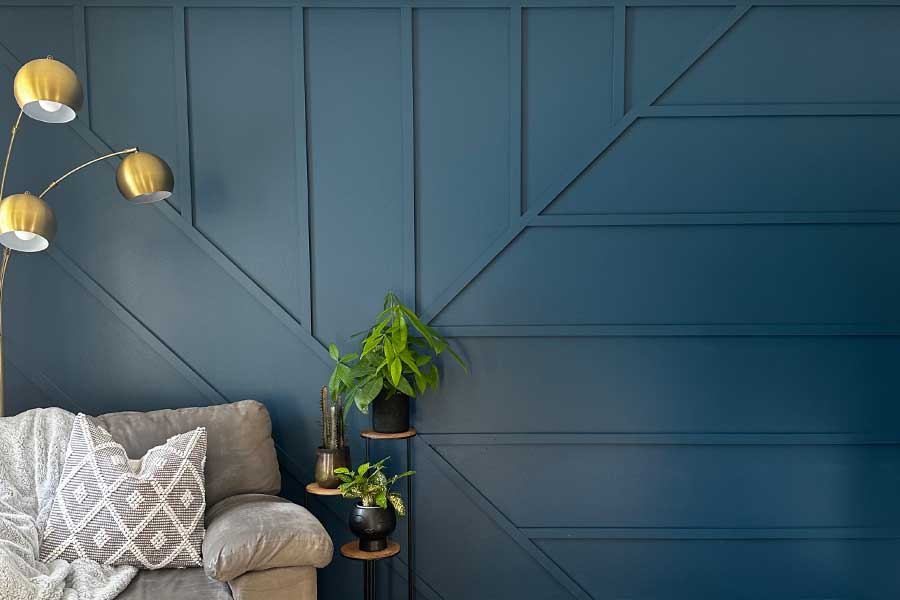 This color is absolutely magical. 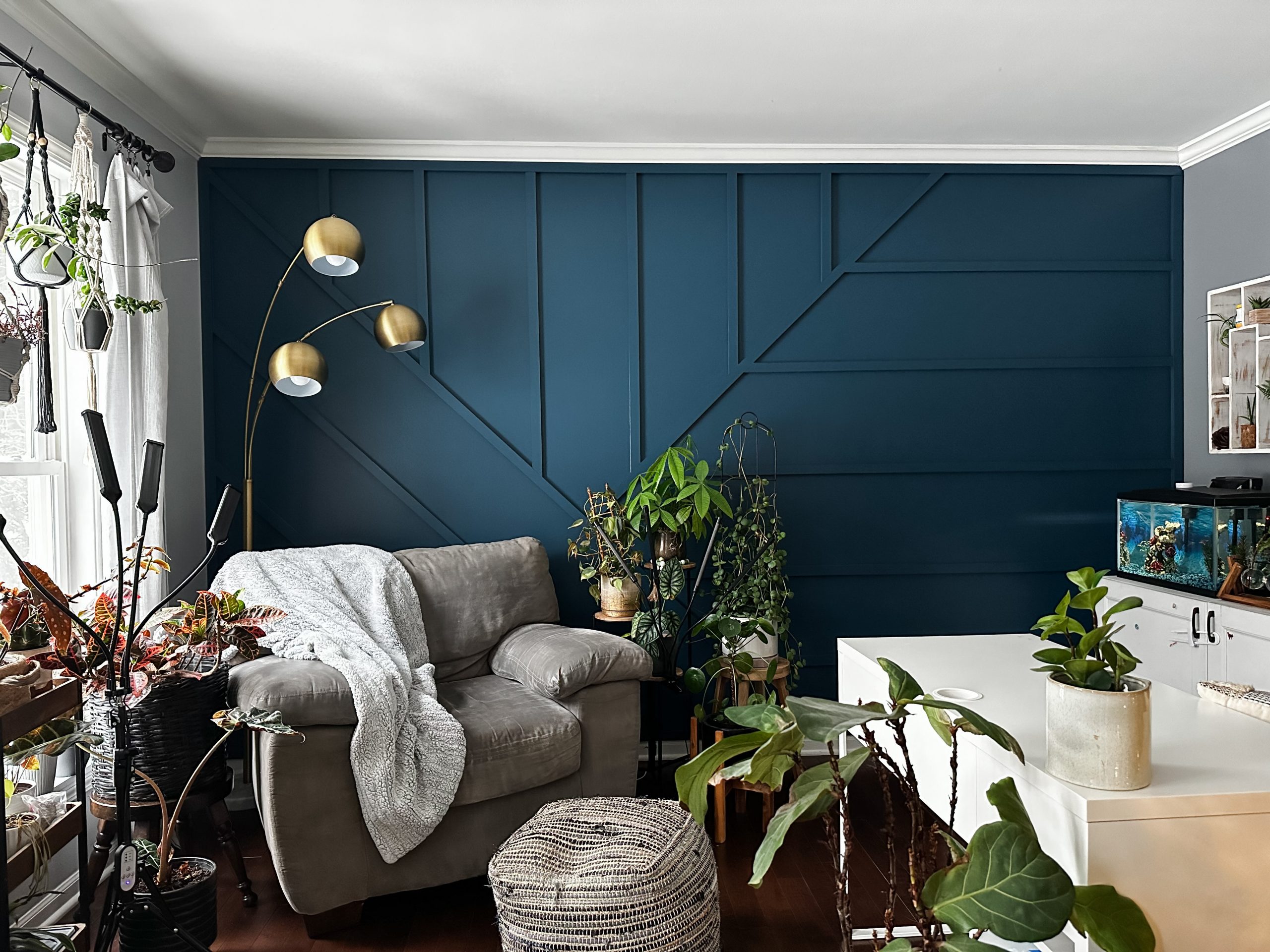 Let me know if you have questions! Reach out on here in the comments, or over on Instagram. Check out my story highlights on IG for details and videos.
Viva Magenta: Color of the Year 2023 in Home Decor DIY Succulent Plant Hanger

Viva Magenta: Color of the Year 2023 in Home Decor

The Window Treatments I Have in My Home